But I want to write a blog post. I really and truly do.

But what the hell do I talk about?

I'm sick for the thousandth day in a row. Over it, frankly. And feeling all cabin fever-y. But when I leave the house, I get actual fever-y. Which is not fun, despite how insanely fun it may sound.

I have no new news.

I had to get the emissions tested on Lola today so that I could register her as an Oregonian vehicle next week when her California registration expires. And THAT was a unique experience. And by that I mean, I'm not in California anymore. But I'll blog about that more next week after I get the registration done and get my Oregon drivers license.

OH! I dyed my hair (I almost wrote "died," which would have been funnier, however untrue.). I'm a brunette again for the first time in a million and three years. Here's a lovely, high quality, camera phone shot: 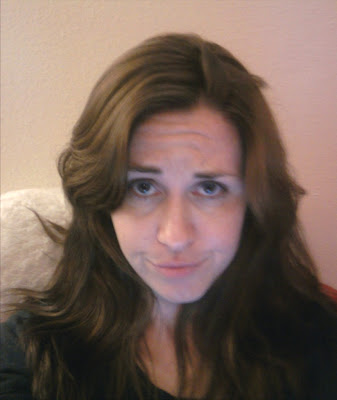 Please don't mind the pale, sick for days skin or the bags under my eyes
Also: no clue why I make the funny faces. 'Tis a mystery
I just remembered! I do have one bizarre story to tell. It's a bit old, but like all good things, it kept nicely in tupperware and stored in the freezer.

The night of my birthday, I encountered a drunk cyclist! NOW, for those of you who do not live in a bicycle-friendly city like Portland, this may be surprising. And indeed, being a new Portlander myself, it was a first and quite a surprise.

But it makes sense. All the people traveling by bike, it makes sense that some asshole will get trashed and attempt to ride home three sheets to the wind (pee ess, I hate that saying) just as plenty asshole shit for brains drive their cars drunk. Those people should be shot in the leg and left to die in the street. But I digress.

ANYWAY, I was driving home (sober!) fairly early in the a.m. and came upon a bicyclist riding pretty far into the road (cyclists here are very courteous for the most part) and slowly. I couldn't pass him where I was and he was also riding a little swervy (that's a word, I swear). So I just drove slowly behind him until I could safely pass (mind you, I was still nervous to pass him because of the swerviness). I finally did pass him, safely, and thought no more about it.

Then I came to a stop sign. At which point, Drunk Cyclist blows through the stop sign, flips me and the car behind me off, and proceeds to swerve dramatically and purposefully back and forth across both lanes of the road. Seriously. SER-IOUSLY! So what was I to do? I just rode behind him until he finally turned onto another road.

I mean, I really, really just wanted to drive over his drunk assholey ass. But I though that his bike might do some damage to Lola. Also: witnesses are a problem.

But seriously? This cannot be legal. I think the same laws should apply. If you're drunk, you don't get to drive a car, so you shouldn't get to ride a bike.

Also: Drunk Cyclist, you are a douchecanoe. Your little drunk ass does not own the road. I hope you try to pop a wheelie and end up in a ditch with a broken nose.

And that's all I have to say about that.
Email ThisBlogThis!Share to TwitterShare to FacebookShare to Pinterest

8 comments mean you love me:

1) A million and three years is a long time. You must be old. Thatd probly be why you're so wise
2)Dude, I totally sell Tupperware!
3)You rock my socks.

"Douchecanoe" is my new favorite word! :-)

yay for made up cuss words!!

and that *is* spooky! weird. for reals.

Found your blog through Boonie S...

I live not too far away from a major cycling park that was recycled (pun so intended) from an old rail line. I want to run over the bicycling ass-hats myself... and that's just the sober ones.
We get occasional reports of drunk lawnmower riders but drunk cycling wouldn't surprise me with the red-neckery that goes on out here...

welcome! thanks for reading.

drunk lawnmower riders? that's scarier than drunk cyclists. you could do some damage with a lawnmower.

Stupid drunk cyclist. I've not encountered one, but you're right - assholes are assholes.