Disclaimer: I'd hate to start a feud or hurt anyone's feelings (which is why I'm not naming names), but something has been nagging at me lately and I need to say something about it.

This is what my blog is all about, after all, having a space where I can vent my feelings about a particular subject. And today? I am taking full advantage of this forum. Even as I write, though, I feel badly. Like I'm being a spoil sport. Like I just can't take a joke.

But I'm gonna keep on writing, because this is important to me. Because some things just aren't funny. And I know funny.

Imagine there is a website that you love. You love it because it is liberal and talks about The Sex. You read it religiously, because its columnists are some of your fave bloggers and because it makes you laugh. It is total awesome sauce, which, admittedly, is one of your favorite things.

And while this was genuinely not meant to hurt, but be funny, you can't help but feel hurt. Like the butt of a joke you're not in on.

So what to do? My plan was just ignore it. It doesn't affect me. It's a site and I don't have to visit. And I still don't, I guess. But that makes me sad, because I do love that site. But this gnawed at me and gnawed at me. I had to tell my side of the story, dammit!

I get the joke. I do. It's funny to make fun of such things. I get the comedian crossing the line to make the joke. I get it. And I'm not faulting the author of the article. I'm faulting the concept that sluts are somehow excluded from acceptable sex dialogue.

here. Why don't we love all vaginas? Why are some vaginas good and some disgusting? Some too gross for proper society? Why is it that we have a class system of vaginas?

I'm really trying to understand. Sex is awesome, but only if you do it with one person?

So what does that have to do with vaginal hygiene? I see my gyno. I get tested. I pee after sex (no infections for me, thanks). I wear my cotton panties. I drink plenty of the agua. I don't "scrub" my hooha, because the skin is sensitive down there and my gyno said don't scrub, but rinse gently with plain old water.

And still? Sometimes, because of hormones and body chemistry, my vajayjay smells.  Yup. It does. Better fucking believe it. And I'd bet a good bunch of money that plenty of monogamous women out there practice the same hygiene and still have smelly vaginas sometimes.

But beyond the fishcunt moniker which just gets under my skin (because I think there is a line between something funny and something derogatory), my issue comes back to the derision of "loose" women. This is a bigger problem, beyond sex websites. Beyond what Summer's Eve tells you (read this article by Lissa Rankin, btw!). This is about sexual revolution.

Because having lots of sex is clearly poor hygiene for your vagina. Or something. And that's funny I guess.

The problem with that is that it's only funny if everyone agrees it's clearly sarcastic and wholly untrue. But people still buy that. They buy that lots of sex is bad. For women anyway.

But I see it as derisive, not funny. Where does the joke end and the harmful archetype begin? When we poke fun at women who are "sluts," it doesn't feel like fun to those of us living a lifestyle that might characterize us as sluts.

I was told, in a sense, to lighten up. That it's all in good fun.

Some jokes are only funny to the comedian and those in a select circle who aren't the butt of the joke. Some jokes are passe or in poor taste because the societal mores have dictated that it's no longer appropriate to joke about.

If I heard a joke today about a lynching, I'd cringe. I could never be forgiven for blogging about racism "all in good fun," so why is this any different? Why are women who aren't monogamous or who have multiple sex partners still below society's esteem? Why?

I can't tell you how much that angers me.

So what would you do?

I'd love to challenge everyone to (first) love your vaginas!

Do you have a vagina? What do you love about it?

If you don't have a vagina, go love a vagina today. It will thank you for it.

Sex writers and people who read about sex, hell, people who have the sex: let's value all vaginas equally. 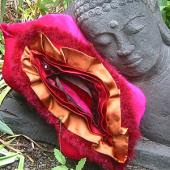 I totes want this vagina pillow
who wants to buy it for me?
hug a vagina today!
Email ThisBlogThis!Share to TwitterShare to FacebookShare to Pinterest

15 comments mean you love me:

Brilliant as usual! And yes, I love my vagina. And so has every man I've ever been with. Frankly as far as I'm concerned, the sun shines out of my vagina. Sure it has it's moments as my cycle goes through the motions, but ALL bodies go through the motions & at one point or another, we ALL have our moment of stinky, and no amount of hygene is going to change that. It's nature, not hygene. And truth be told for those who haven't gotten on board yet, the vagina is self regulating. Those products designed to "clean" & "cleanse" that area, are actually a recipe for disaster as they remove all the natural flora neccessary to keep Queen Vagina sweet & tart.

As for that blog, I'm guessing someone let Christine O'Donnell write that one, just for the hell of it. Let's face it, not everyone has evolved enough to be "present" in the 21 century. =)

You know how I feel about this, hence why I shared that lovely book with you, so there is only one thing for me to say:

You know, I've been monogamous for the past 17 years. And in that time, I've had a smelly vagina or two.

This is such a fraught issue for people. Own your sexuality, but not too much. But what's too much? What number? Who decides? Why can't you? It's your pussy, right?

For god's sake, KEEP IT CLEAN! Well, duh. But it seems like clean means number, not just smell. Pristine.

I find some difficulties in loving my vaJJ, just as I have difficulties about the amount of partners I've had (though I do agree about loving the vaJJ). Perhaps I don't read enough sex commenting blogs, but I didn't actually know there was thought to be a connection between smell and number of partners... and I will say, I've never heard anything about a man's nuts smelling any different based on his numbers (though I wonder if you had?)

but yeah, I think there's a cast system on cleanliness, which I endorse. Clean your vaJJ! Clean your balls! Have SAFE sex as you please!

Sun- THANK YOU! that was my point exactly. *happy sighs*

Jackie- right. you never hear about a man's smelly balls. because they get to be gross *and* have as much sex as they please sans reproach.

I agree with the man's-smelly-balls point. That sounds weird.

THANK YOU! that is what I was trying to say. and I take umbrage at the implication that a vagina is a trash receptacle.

I love my vag and sometimes it smells.

thanks, E! your comment made me want to rawr. *RAWR*

Gosh I adore you. You're TOTALLY correct. Everything you said. Because you're brilliant.

From a man's [at least my] standpoint, this is really a non-issue, like men who worry about the size of their penis. When you really love someone, I mean the real thing, then the smell [or the size] isn't on your list of priorities. When you're down there, you have one thing on your mind - pleasing your partner. And if they feel the same about you, then all else is a non-issue.

I understand the concern that goes through peoples minds when thinking about this, but in the end [no pun intended] it's no more a problem than a man who's losing his hair, or a woman who's gone through the whole cancer nightmare which ended up with a radical mastectomy, or any one of a dozen more "non-issues"

Love will out - always.

seal- thank you for your perspective. it's refreshing. I think the problem is not necessarily about sex and love per se but about society finding ways to judge. about taking away these misconceptions.