I have my things! Well, most of my things anyway. I have my bed! And last night was the best night's sleep I've had since like July. Ahhhhhhh I love my bed. And my cats are stoked too. They are so happy and have been sleeping and bounding all over the boxes and furniture. 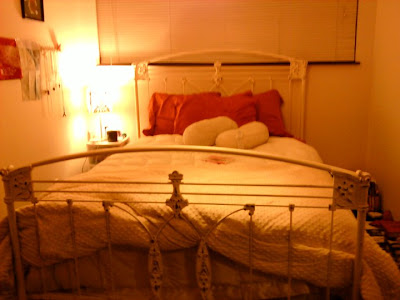 So soft and cozy!
But, like I said, some of my things didn't make it.

And thus it is time to tell the tale of my mountains of crap and the extraordinary logistics of moving it all from So Cal to Portland.

When I decided to move to Portland, I couldn't afford to rent a big truck. I could only afford a trailer. So the plan was to sell most of my stuff off and then hook the trailer to my car (which I want to drive up anyway) and drive it up myself.

My father, however, was extremely worried about leetle ol' me wielding a trailer for 18 hours. And rightfully so. My wielding anything that unwieldy is a frightening proposition. Is the word wield starting to sound weird to anyone else? Wield. Wield. Wield.

He proposed this (and had to really talk me into it): he wanted to hire movers (my dad is a notorious cheapskate so he obv meant business), but in order to do so, would have to borrow against his 401k. But he couldn't do that until August. I was moving in July. In fact,  I had already given notice on my house and at my job. So we decided to put all my crap (still sold some of it) in storage in So Cal and I drove up without it.

In late August, my dad got the funds, waiting for them to clear in his bank, and about 2 weeks ago, started calling moving companies. We chose Starving Students because they seemed nice and were inexpensive (well, in comparison).

I guess you get what you pay for. Let it be known: never hire an asshat company.

They got squirrely pretty early on. First they said they'd call us with a 2-12 day window of when they would pick up and deliver. Ummmm, not okay with me as we all have lives and things to work around. Never mind that my dad would have to take off work and drive 45 minutes to my storage space to open it for them so it makes it hard if we don't have a specific time.

Then they gave him a pickup time last Thursday at noon. When they didn't arrive at noon, my dad called them and they hemmed and hawed, "aw man, we have another pickup, it'll be at 3." So he waited. Until 3. Nothing. They called him, "aw man, it's going to be tomorrow instead." Excuse me? My dad took off work to come down and they couldn't even make the appointment on the same day? He told them as much and they promised to show up the next day.

They did show up that time. BUT (and a very large but indeed), they had picked up someone else's stuff already. The truck was over half full. So then they squeeze my stuff on, but my couch, TV, books, and book shelves wouldn't fit. For the record, my dad had told them how much stuff I had and the dimensions. And if the truck wasn't mostly full, it would've fit.

Now, if it were me, I would've had them unload the truck and said we'd go with another company. But my dad is not me. He figured it was already loaded, so may as well send it down and he'd yell at the company and they'd send the rest for free.

Now, this sounds like a scam to me. They knew my stuff wouldn't fit. And if they'd picked mine up first, someone else would've been screwed instead. And they load it up and go, oh no it doesn't fit! Like you're gonna unload it after that. Bullshit.

I guess my dad talked to them today and threatened litigation (it takes a lot to piss my dad off enough for him to do that) and they were like, "go ahead and sue." So he's calling the supervisor before anything else. But we may end up in small claims court.

But it's not just that. Now I have to pay another month of storage. And if it was just furniture, I'd say sell it. But it's my books. And my picture albums. And yearbooks. I just can't lose those.

Because they're total asshats.

UPDATE: Starving Students agreed to move the rest of my stuff for free if we pay the weight (which we would have paid anyway). Hooray!!
Email ThisBlogThis!Share to TwitterShare to FacebookShare to Pinterest

15 comments mean you love me:

WTF? Really? I'm keeping a can of spray can of paint in my car to help with the cause. If I see a "starving student" sign, I'm going to change it to "asshat". I've got your back.

thanks for the solidarity, woman! tell your friends!

There's a reason those fuckers are starving... They won't be getting any of my business. But then when I move anywhere I tend to only keep what I can fit in whatever vehicle at the time. Which is usually my computer, clothes and a coffee cup I've had since I was months old... Oh.. and a sewing machine now.. everything else is replaceable...

Point One: Horray for not sleeping on the floor. Unless you drunk and having sexy time with much abandonment.

Numero Dos: Your Dad seems kinda awesome. I heart him for doing this for you.

Part 3, subset whatever: Asshat student movers are so gonna get a karmic punch in the nuts for this.

Finally, my word verification is "demoven". So, glad they finally got around to de movin' and hopefully you will get the rest of your goodies soon.

thanks! yeah, if I had been there, I would have kept the books and left quite a bit of other stuff, but it's the principle. :)

What complete asshats! Ugh. I HATE when people fuck you around like that.

2 of our 3 relos were company-paid, and I can tell you firsthand that there's a difference in how they handle you if it's a big company or just some sweet, innocent homeowners.

Are you kidding me?! I never promote beating someone, but this is one of those situations where I say "bat, bat, bat" (my weird phrase for when someone pisses me off and i want to hit them.)

And your poor dad!!! I cannot believe how unprofessional those people are. How can they just go "eh, it doesn't fit"? And to not even care when you complain?! Bastards.

Jesus H.--well, you know the rest. As if packing up and storing your belongings, living without them for months, and having to trust someone from afar (and get your dad's help) to load and move the stuff isn't stressful enough, you have to deal with asshattery as well?! Ridiculous! I hope they get the rest of your things to you asap, and I hope karma bites them where it should and HARD!

I so love Poppy!!

That sucks all the way around. Sorry to hear that it was such a nightmare. I swear we'll NEVER use Starving Students & I will tell everybody I know that they're asshats!

That is rage inducing. Sounds like they're starving for a reason. Asshats.