Kiddos, I couldn't be more excited for the guest poster today! I have known Deb (TheBadassMuppet) since college, since one fateful film class actually, where we talked politics and race and gender theory and not so secretly bemoaned the several Neanderthal men on our campus... Ahh good times. I'm so glad she and I have stayed friends since. She's a fellow bookworm, an incredible woman, strong and opinionated, and a voice in the queer community. I just love her to my toes.

Plus? She's an awesome writer. I mean it. She's so talented. I'd like to say we were taught by the same professors, but I suspect she just has loads of innate talent. You can find her on Twitter and make sure to check out her work at Bitch Magazine. Enjoy!

“I – I think so,” I managed, stalling from saying At least I could almost feel that, a little.

Lesbianism was harder than I’d expected.

Many angst-filled journals later, I was essentially “out” (except for, you know, the family thing) and feeling free and great and blah blah blah, but sex continued to baffle me. In a way, it was like puberty all over again, and, like any adolescent with middling confidence, I hadn’t yet learned to be picky. I dated the first ladies who came my way, regardless of chemistry or how little they had in common with Veronica Mars. The woman in my bed at that moment, for instance, was spacey and appeared to have no other friends or interests. I could not honestly say that I liked her – yet there we were, reinventing the wheel with her head between my thighs. Playing around with boys and men may have been boring as all get-out, but at least I had known what was expected of me. I had always wished sex was like in the movies, in a more literal sense than people tend to say that: sensual kisses that cut directly to post-coital satisfaction.

Years later, as a proud, happy dyke with a rockin’ sex life, I would have a different view. But there was one factor, dear readers, which I’m afraid doomed my first proper Sapphic encounter before it began.

I am referring, of course, to the dental dam.

If you’ve never had the displeasure, a dental dam is a square of latex big enough to serve as a floatation device. It’s meant to block labia from tongue so that no sexyfluids pass on anything unseemly. If the device sounds, well, unpractical for territory full of nooks and crannies, it is, to the point where most packages’ official instructions (never had to look at those for a condom, did you?) advise to cover the genital-side of the block with lubricant.

Did that kill any sex-buzz you might have had going before checking out this entry? Yeah. That’s the point.

So there I was, lying on a snakeskin-print sheet feeling all safe and responsible, and I had plenty of time for that because I wasn’t feeling anything else, except a growing sense of anticlimax.

The second half of my first time confirmed what I already knew: the dam is a damn shame. It seemed less like sex and more like licking a banister. But hey, I thought, at least I’ve officially Been With A Woman now. The knowledge was enough to make me shake, though not in the way one would hope. As Laura M. Carpenter argued, the first time exists so that there can be more. Still, before we stopped, something genuinely exciting occurred: rogue wetness found my tongue when the dam crumpled a bit. (Like I said, they’re unwieldy, which spoils even the official “point.”) She tasted like honey, which was much more arousing than grape eraser. Next time, we’ll both get checked at a clinic beforehand, I vowed to myself. It might take some extra planning, but I knew it’d be worth it. 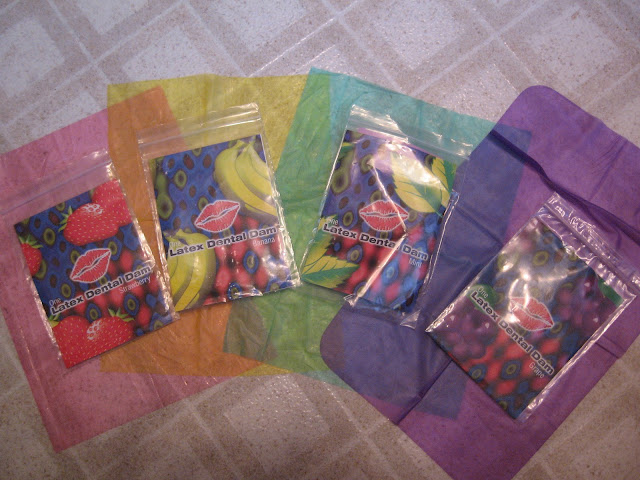 The pic of that dental dam...terrified me. And made my lady bits go back up inside. So...thanks for that. Totally unsexy. I feel like it might be like trying to lick candy through it's plastic wrapper. Frustrating.

Hahaha! OK that latex thingy makes me almost associate to these cloths they use in operating theaters, i.e not remotely attractive.

Checked at clinic beforehand sounded like a much better way to have mind-blowing sex. :)

Love this post :) I have a friend who goes as far as using dental damns AND gloves when she has sex with her girl friend. The worst thing is that she tries to encourage me to do the same... tut tut! what's the world coming to eh?

Also, I hope this girl is invited back. I'd like to hear more about her sexual adventures and finding out that sex is Way better the the Hollywood passionate kiss cut to after-pleasured scene. (I was totally the same way back before I realized how awesome sex could be!)

thanks for reading, everyone!

Deb, thank you so much for posting!

Thanks for the chance, Andy... and the lovely intro, of course!

I'm going to the dentist tomorrow, and sadly that'll be the most action my mouth gets for a very long time. Dam-n.

lol. at least with my hot lady-on-lady experiences, i never tried the dreaded dental dam experience.
just seemed terribly obvious that it was a terrible idea as far as sexy/arousing goes.
yeah, i'm bad at safe sex, but at least i've never caught anything!

I am all for safe sex and would definitely use one if my partner and I were not tested, but you are right, it’s just NOT the same! But for those occasions when a lady must use it, one solution might be to shave or wax down there. I do so occasionally not for any aesthetic reasons, but because it really increases sensitivity down there, which might provide a bit more sensation when using a dam. If shaving is not one’s thing, another possible solution is to have the receiving girl spread her labia and hold the dam in place so that the giver can get at the clitoris more easily.

Jess- you poor thing. the dentist shouldn't be that good. :)


Anon- I suspect it's different for everyone. I, personally, don't like to shave or wax much. it's painful down there when I do and I don't enjoy myself. but don't worry, even with hair, I have PLENTY of sensation.