So either Portland is having the weirdest winter ever or everyone I talked to before I moved here was a lying liar who lies. Everyone told me it would be like 8 months of cloudy days. Um, we've had plenty of sunny days here and there.

Also, it's been oddly warm, which I wasn't expecting and don't even really need necessarily. I like the cold. But some of the more annoying types acted like the spoiled girl from California wouldn't be able to handle an Oregon winter. Yeah. Jackasses.

Firstly of the mostly, I lived in Paris. It gets buttfuck cold there. Yes it does. Second of the all, it's not Alaska, you jackasses.

Oh and I grew up in California, but I grew up in the desert, where we have very extreme weather. Super hot summers, yes, but also frigid winters. And wind. Always wind. And wind makes it SO much colder. I have yet to feel as col here in the port land as I felt many a winter in my hometown. So there.

But I still reserve some resentment for those who told me it doesn't get hot here in the summer. It does. And there are many summer-time fun water and outdoorsy things to do. So shut it.

I'm pretty sure I abuse the exclamation mark.

I'm sure you're all wondering about Jeté's health and she's doing okay. Her tumor is getting huge, but she's not in much pain yet. She still eats well and has energy and her breathing is still normal.

What isn't normal is her mood. She's had these weird mood swings where she's super sleepy and then she's super playful. I haven't seen her this playful and hyper in years. I already told you about the new favorite cat toy. Well, she now brings it to me and meows at me mournfully, as if she will die if we don't play right then.

The other day, one of the cats had dismantled it. So Jeté brought me the string to play with which was just fine for her. She had a blast. But then the next day, she brought me the mouse. I told her jokingly, "Well go get the string and I'll fix it," and then went back to whatever I was doing. Imagine my surprise when I heard a meow and looked down to find she's gotten the string. Smart, fucking cat.

I haven't talked about my grandma much. My dad's mom. She died when I was 19 and she was the only grandparent I ever knew, discounting my dad's dad who died when I was two and who I only remember as terrifying.

My grandma, on the other hand, while not a cuddly or outwardly warm woman, was certainly loving in her way and was always around. Looking back, she was an inadvertently comical woman. She was sweet yet tough. She could sew and crochet and knit and cross stitch. A horrible driver. A great gardener.  And a horrible baker, though everyone raved about her cookies and cakes.

I remember she would make these cookies that were hard as rocks. They were awful. And she kept them in a drawer in her kitchen. Think about this. Not a cookie jar, a drawer. And not in a baggie or container in the drawer, just loose cookies in a drawer. Every time we went over to her house (a tiny one-room built by my great-grandpa after the turn of the century), she'd offer me some cookies and my parents were like, "Yes, have a cookie!" I'd just shake my head no, my eyes pleading to not make me eat the cookie.

I stumbled upon these funniest signs from the Rally to Restore Fear and/or Sanity the other day and these were my faves: 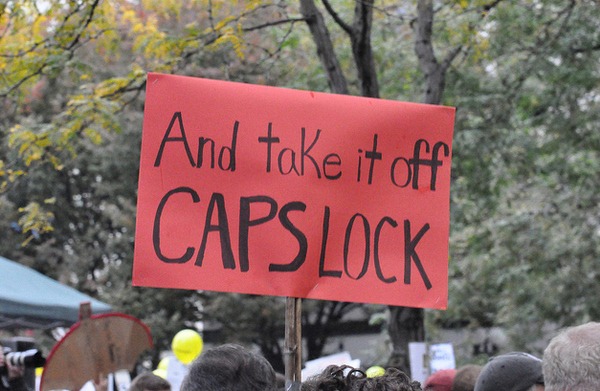 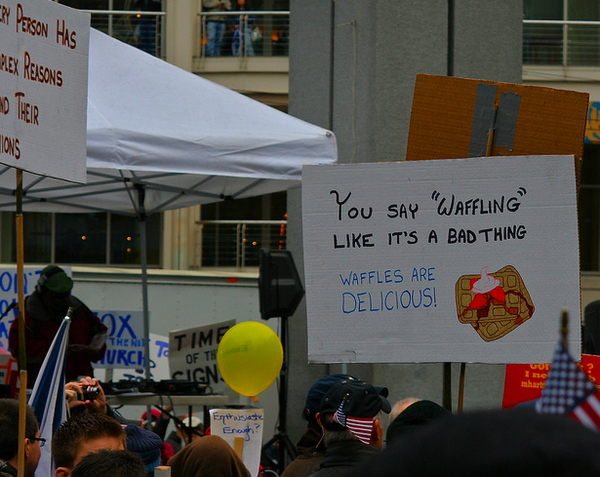 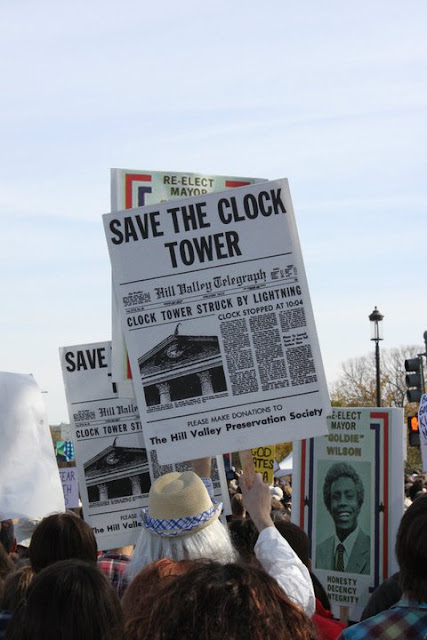 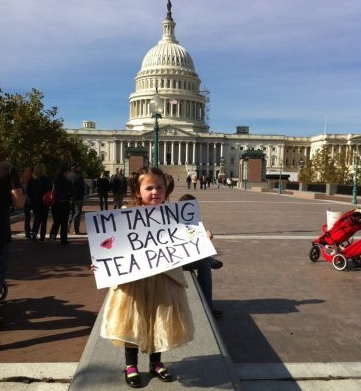 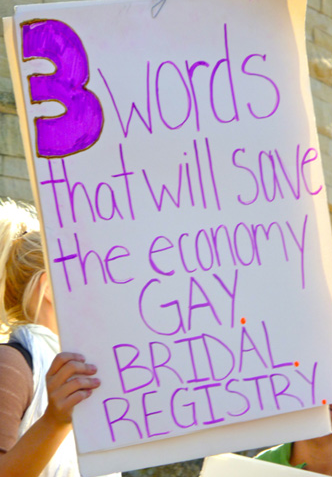 So every month since I started this blog, I've created a new masthead. It's kind of my thing, changing it up. And I've had fun doing it.

20 comments mean you love me:

I'm the chick that doesn't know anything but shouts like she does. They're catching on.

Loved the signs. The last one is the best.

Oh and love the masthead too!

I would have to say the weather this winter has been a little wonky. And I am suprised at the lack of rain, at least down here in the Euge. In fact the warmer weather is giving my lawn ideas...like it should start growing again and needs to be mowed, whatevs!

Seriously though, why would anyone keep cookies in a drawer? That's just ridiculous.

Also, I agree that waffles are delicious and of course Jete is a smart cookie.

Oh and I almost forgot, I love the new masthead too much to give it up just yet. However, it feels very winter-y so maybe a change in the spring?

Great post, I loved the pictures. The gay marriage one cracks me up. If they legalize it, I am going to open up a chapel and also become a divorce attorney with an office next door.

Rotten Mom- it's time we taught you the basics. wouldn't want you to get outed. thanks so much!

E- things are totally blooming here! grass and flowers and all the trees have buds. I got tons of flower pics yesterday. so weird. I'm worried it'll get cold again and it will all die.

Lauren- you comment however you need, hon. the drawer cookies still freak me out. love ya! and that's funny because I took that photo in the summer. hee!

OT- that sounds like a great racket. I would start planning weddings except I suspect queens would be even bigger bridezillas. maybe I'll just do lezzie weddings.

And I completely, utterly adore the "gay bridal registry" sign!

Haha, awesome! I hate that superbowl girl too. I literally laughed out loud when I read that. Great blog, I just stumbled over. And now off to have a better peek around :)
http://texagermanadian.blogspot.com/

I woke up this morning and my cats had piled several toys on top of me. They are nothing if not direct. They are obviously related to Jete.

I'm the chick that doesn't know anything about football, and goes to the party to actually talk to people. I think folks hate my kind too. And I too abuse the exclamation point. But I like emphasizing my points [insert exclamation point here] :p

1. I love this new masthead. (What about changing the colours, instead of the whole masthead)
2. Masthead. hahah
3. I believe that cats understand everything we say. Never ever tell them your bank account number.

Tex- I know. I just want to tell her to just keep quiet. :) thanks and welcome!

Simon- it was pretty good!

hasta- I don't mind the talking if we can also watch at the same time. I'd hate to just stare silently at the tv. point! taken! hah!

Jules- HAHA! YES! you so should. I'll go into business with you.

Lex- thanks! hrm. have to think about that. and oooh that's good advice. my boy is too dumb to remember numbers, but my girl is just too smart.

Portlanders will brag on about their survival of cloudiness, but I was surprised when I moved to Portland at the fact that, while it is cloudy and rainy, there is often sunshine at least for a little part of the day. I come from Western Michigan, where we once had something like 63 days without the sun appearing once. What bothers me is that it's still cloudy and raining in June in Portland. June! That's supposed to be real summer!

yes! I was surprised when I first got here at the cloudy mornings well into July. but I'd just come from 110 degree heat in So Cal so it was a relief. ask me again how I feel this summer. :)

i'd say keep it until you get tired of it, and THEN switch it out when you make something you like better.

but of course, feel free to be creative however you like!
i enjoy seeing the new ones.

I MISS YOU!!! Stupid job taking up my stupid time. Grr.