Hey creepy dude watching me run at Mt Tabor, you're creepy. Stop staring. Also, waving that stick that you found on the ground like a ninja does not, in fact, make you a ninja.
~~~~~~~~
I went running today with my bestie for the first time in a long time. If you've been reading this blog for a while, you'll know that a big part of why I left So Cal was for air quality. I like to run and be outdoors and I've been an active person my whole life. But I was developing environmental asthma (pronounced asthmar like Piggy in Lord of the Flies

).
And I've been really, really bad about going running lately. I've been hiking some and I swam laps at my friend's gym (I am just not a gym person, but I love pools). But I've been a slacker on the run.
Well, I'm bummed to report that not 5 minutes into my run this morning (I may have overdone it a bit though), I brought on a decent asthma attack. Which pisses me the hell off. I do not accept this. Grrr. So I'm thinking that I'll just keep at it (but take my inhaler) and take it a little easier. I also need to get off my tookus and join a dance studio already.
~~~~~~~~
I am happy, however, to report that the jewelry making is coming along and I should have an Etsy shop up soon! I'm starting with rings, but also think I'll make necklaces and bracelets soon too. I'm thinking I need to start making business cards to go along with purchases, though. Anyone have any good advice on doing that cheaply? I want to be able to keep my products inexpensive.
~~~~~~~~
Oregon is making it a little hard on me to get my last Gardasil shot. So, some amount of months ago (when I was still in California), I finally decided to get the HPV vaccine Gardasil. It includes 3 shots in a certain succession. I need the 3rd shot and I need it in October.
So, I call the Planned Parenthood and they're all super gooey nice, but they only give the shot to girls under 18. Clearly I am well over 18. But they refer me to this clinic that could help me pay for the shot (no insurance since I went freelance). I call said clinic but I get a message that basically says they can't answer the phones, gives me the doctor's personal cell phone in case it's an emergency, and hangs up.
Right.
What am I going to do? Call the doc and enquire about a Gardasil shot? Yup. That qualifies as an emergency. Sure. Sure it does.

So I guess I just keep trying? In the words of Liz Lemon: blerg.
~~~~~~~~
Yesterday, Bestie and I went out for ice cream at this adorable vegan shop in NE Portland. I hadn't expected to find anything I could eat because generally these places worship the soy god and I am allergic. BUT! I was wrong. They had this coconut awesome ice cream in several different flavors. Several deliciously soy free flavors. 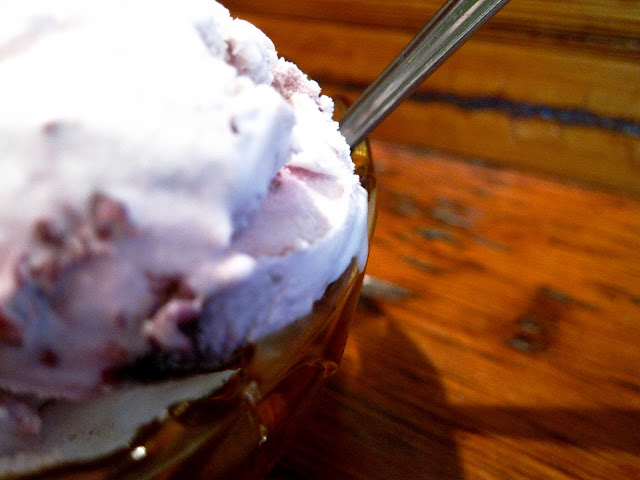 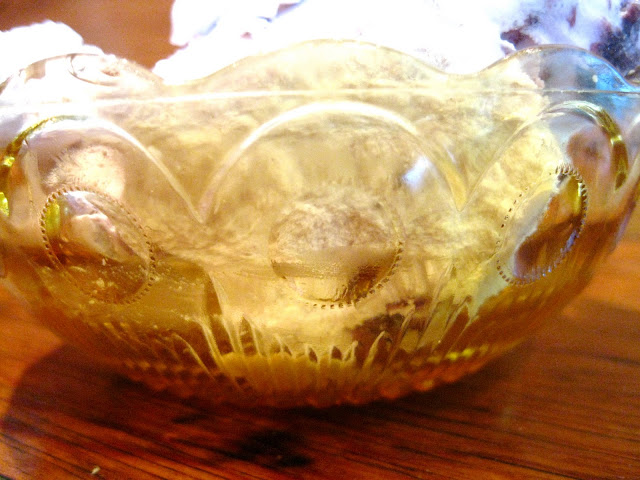 See the pretty bowl?
For some reason though, however insanely tasty, the ice cream was kind of hard (teehee). And not just because it was frozen, you (someone always has to be a joker). So as I brought my spoon down into the ice creamy goodness, the pretty bowl literally cracked in two. Seriously.
I felt so badly! I'd murdered the pretty bowl. The girl that was working there was so sweet too and didn't call me a murderer (I might watch too much Bones

) and got me a new bowl.
After which I was so scared to break the next bowl that this was how I ate it: 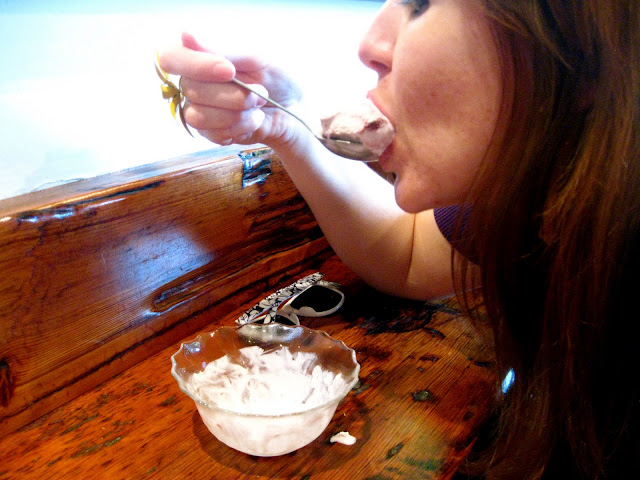 That bowl is a survivor.
Also, it looks like I'm giving the ice cream head. I was. We both enjoyed it.
~~~~~~~~
You will notice in the above photo that I was wearing purple to support victims of homophobic abuse. The rash of suicides by gay teens recently just breaks my heart. You can help too. Check out The Make it Better Project to learn how to get involved.
And National Coming Out Day is October 11! Show your support by donating your Facebook status here.
~~~~~~~~
Today is the last day to submit your photos to the Raw Photos Contest! Theme: Autumn Where You Live. See the rules and submit here. Finalists and the winner will be announced after submissions close and The Suniverse and I deliberate.
Email ThisBlogThis!Share to TwitterShare to FacebookShare to Pinterest

Yummm, coconut ice cream sounds delish! Too bad about that bowl though, however I'm certain I would have broken it too (I break things, it's kind of what I'm good at).

I love your ring also in the pic. Did you make that?

yeah. I'm good at the breaking things too. and why would they put ice cream in such a delicate bowl anyway? it's a hazard.

thanks! I actually didn't make that ring. I got it in a little boutique.

Damn you! Now I want to move to Oregon and eat ice cream.

dooo iiiiit! we'll have so much fun!

Can I suggest earrings as well!? I loved the ring but am really not a ring person (if you had to swash alcohol on your hands FIFTY times a day, you might understand...)

I've been thinking about making earrings. it's a little more complicated and more expensive, but it might be in the works.

That's it. The next time you're in London and we're eating ice cream you are FORBIDDEN from using my bowls.

I hope you're happy.

oh man! I'm so bummed. but I guess that's the price I pay. maybe we could just get cones?

Nice blog! I'm sure Portland will ease your asthma... the air is beautiful up there :-) Just stay clear of all the hippie and hipster pot smoke clouds that float around that city during the afternoon and evening times.

thanks, Dr. Cynicism. hopefully it will soon. I've been here since July. :)

I know allll about the pot clouds.