Where are the insomniacs in the audience? Let's give it up for insomnia, y'all!

Insomnia is way too common, yo. I see ads for sleep aids constantly and, usually, I don't even pay attention because they rarely live up to the hype. Except for those ones with the alien ghost butterflies. I like those. They're coolio. 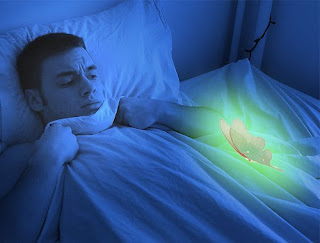 I don't know what he's so scared of.
The alien ghost butterfly just wants to put him to sleep, that's all.
I have battled with insomnia since I was a teenager. I go through long periods where I can sleep just fine, 8+ hours a night, but then I'll hit bouts of insomnia where I cannot sleep no matter what I do.

For me, it's never a problem of staying asleep. It's getting there in the first place. And I can never predict the conditions. Sometimes stress will keep me up worrying, but sometimes, depending on the stress, I'll knock out like I just walked from Los Angeles to Johannesburg, which is hard to do because of the Atlantic Ocean. Sometimes the lack of stress can keep me up. I won't have anything else to think of so my brain will dwell on stupid ass shit.

Because the number one problem standing between me and Sleepyland is my damn brain. My brain is overactive. I cannot turn it off. I've learned habits over the years that work just for me and can usually trick my brain into relaxing. Reading before bed helps, so do short and funny TV shows (but anything over 45 minutes or too complicated of a plot and I start thinking too hard about it). Music and sound machines don't help (I pay attention to them and sometimes start choreographing in my head) and the same goes for leaving the TV on (even with no sound).

Medicating sometimes helps. Out of the several prescriptions that I've tried, only one has helped me sleep without a hangover, but it's no longer manufactured. Tylenol PM is sometimes okay, but if I get less than 8 hours, I wake up with a raging headache. And really, unless I want to medicate every night (which I don't. read: drug addict momma). I've used herbal supplements, which also sometimes work, but then they usually stop working after a while. I've tried warm milk, sleepytime tea, ev.er.y.thing!

And then there are the times when no matter what I take, I just cannot sleep. Two weeks ago, I went through a whole week of pretty much no sleep. So that friday night, I took two Tylenol PMs AND a melatonin and knocked myself out. And it was fucking wonderful. But damn if that's what it takes for a full night of Zs, dude.

But insomnia is great for the creativity. Often (and this is what I did this last Monday), I'll just give in to the insomnia. I just get up and let my brain work out all its energy. Sunday (which is a common theme for Sundays as I worry about the week ahead), I pulled out my computer, edited a bunch of my photos, added a new page to the blog (p.s. now you can see all my old mastheads), designed a masthead for April and wrote a new poem (which was kind of crap, but whatev). Now, that means I maybe slept 3 hours Sunday night and I was a complete waste of space on Monday, but it was better than tossing and turning in misery, fighting my brain and losing.

Besides, some of the most brilliant writers have been insomniacs, staying up half the night, churning out masterpieces. So I'll take my insomnia as a symptom of my genius. Jane Austen was an insomniac. So was Sylvia Plath, especially after she had children. Then again, Sylvia stuck her head in the oven. Probably because she couldn't fucking sleep. She probably just wanted a damn nap and noxious fumes were her last option. Her LAST OPTION. Get it? Okay, I'm going to hell for that one, I realize. Jeez, get a sense of humor.

The only thing that ever seems to truly work for me is hard, manual labor and physical exertion. If my body is so exhausted that my brain can't compete, I will sleep like narcoleptic on prozac. So I fully expect to get plenty of sleep next week when I'm in New Orleans, building houses until my arms and legs just fall right off. I'll be limbless, but I'll be well rested.
Email ThisBlogThis!Share to TwitterShare to FacebookShare to Pinterest

Hell between my hormonal imbalance induced anxiety and your insomnia, we could be quite the team!

Speaking of hormones, have you had yours thoroughly scrutinized? Could be a possible cause...

ya know, I probably should. I've always assumed my cysts were the cause of my hormonal issues, but it's probably an imbalance that causes the cysts.

I'm a complete insomniac. It sucks. And I love sleep. I can't function well without it.

right? less than 8 hours and I'm a complete mess. of course when I'm going through an insomnia phase, I really get near that. so I'm pretty much useless all the time.