Photo of the Day: Pretty Bird 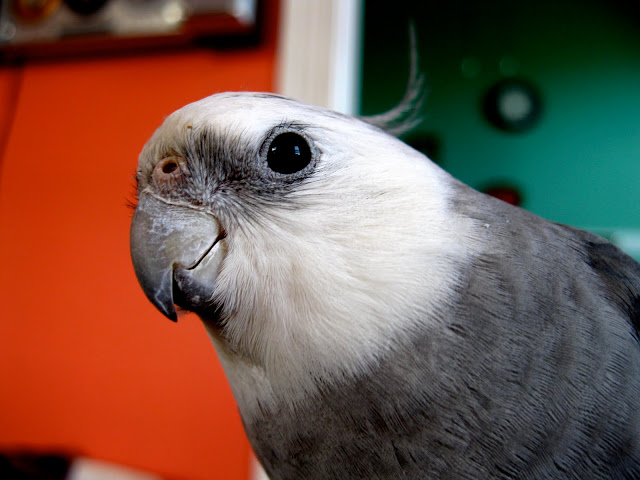 This is my friend Morgan's cockatiel Puja. Last weekend, Morgan was out of town so I bird-sat. She also has a little parakeet named Leon (but Leon is shy). The last day, I arrived at her apartment after work and Puj was inexplicably out of his cage and squawking like the place was on fire. I have no clue how he got out (though I had some ideas), but I fed and him (who knows how long he was stuck out of his cage without food and water?) and let him roam around a bit.

It should be noted the Puja tolerates me. I'm cool. I whistle with him. But I am NOT his momma. No sir. Not even close. But this day, I guess I'd rescued him, because he made his way across his cage, down Leon's cage, down to Morgan's bed, up my leg, and then perched on my knee. And then he whistled at me. I felt very privileged. It was quite the moment for the two of us. Isn't he a pretty bird?

Until a half hour later and I wanted to put him back in his cage. Then he was not happy with me. Not happy at all.
Email ThisBlogThis!Share to TwitterShare to FacebookShare to Pinterest

Tags bird, photo of the day

That is a completely great photo. I also love it 'cause it makes him look huge, like maybe he had you sitting in his mouth and let you climb out so you could take this gorgeous picture of him.

P to the S: he hasn't gotten out of his cage since I've been home. I hypothesize that he was frantic looking for me, and thus melted the bars of his cage with his brain (and sottered them back) in order to roam my apartment looking for me.

Thanks again for loving my babies for me!

The detail and crispness of this photo are amazing!