Did I ever tell you about the time I ate meat for the first time in 12 years? I haven't? Well, you're in for a treat. I truly apologize to friends who have heard me tell this story ad nauseum. I just really like to tell it. Plus, inspired by my friend's post to meet or not to meat, I felt compelled to tell my story once again.

I quit eating red meat when I was 14. It wasn't a moral thing or a political thing. I mean, I did care about animals, but mostly I just didn't like red meat. Because of my soy allergy, I never gave up meat completely. I wasn't stupid and knew I'd still need protein, and I quite liked fish anyway. So at that young age, I quit eating beef and pork cold turkey. And I never missed it. Not once. I didn't even miss bacon that much because I'd fooled myself into believing that turkey bacon tasted the same (it doesn't).

But like I said, it was a taste thing. And maybe even a health thing after a while. However, I'd always said that if I really craved meat, I would eat it. After 12 years, though, I never craved it so I assumed I never would.

Cut to me at 26, living in Paris. A couple things you should know about Parisians: they love ham and they love cheese. Now, the cheese I was behind full force. I love cheese. There is a reason I chose to live in a country with over 300 official government cheeses. Cheese. In markets in France, there is a whole wall of cheese. But ham I was not going to eat (Because I wasn't eating pork, remember? try to pay attention.). Out and about the city, there were really three types of sandwiches to buy: tuna, cheese, or ham. And a girl can only eat so much tuna and cheese.

Even so, after a couple of months, I was craving meat like crazy! Seriously craving it. I was walking everywhere and climbing L'Escalier du Mort (literally translated to: the death stairs) up to my little flat. It's no wonder I was craving meat. I really needed the protein, and iron too probably. Plus, this is Paris. The French aren't so much for the alternate proteins (not that I can eat so many alternate proteins).

In October of that year, my friend and I found ourselves in a train station in Italy, traveling from Rome to Florence. We were starving and the only food in the station was a Quickburger, a Belgian fast food chain. I was just gonna get fries and get something better once we got to Florence. But my friend dared me to get a cheeseburger. Now, I'm not one to take a dare, but it was too tempting to turn down (even though I was pretty nervous that after 12 years, a burger would make me sick). 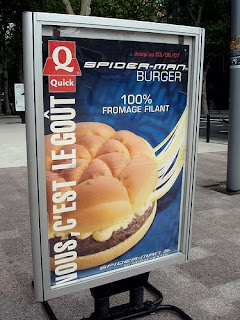 This is a Quickburger
and my cheeseburger did kind of look like that.
And oh my sweet lord, Internet, that cheeseburger was the best thing I'd tasted in my whole damn life! It was delicious! After I'd stuffed my face with the cheesy meaty goodness, my friend and I fell asleep on the train. At which point I had a dream about cheeseburgers. Seriously. I did. It woke me up and I begged my friend to let me get a cheeseburger at the next station. She laughed at me.

"Did you just have a dream about a burger?"

I had crossed over to the dark side. And I never looked back.

Number one reason I'll never again be a vegetarian: BACON.
Email ThisBlogThis!Share to TwitterShare to FacebookShare to Pinterest

This is hilarious. Did I tell you about the time I quit being a vegan? I hadn't eaten meat, dairy or wheat for three-maybe-four years and I was living in Brooklyn for the summer. I was rollerblading around Prospect Park one fine day and I smelled delicious goat curry coming from somewhere between about 100 Jamaicans who were having a festival. Well, I rollerbladed right on over and got a goat curry roti. Never looked back :)

Hello! new to your site, and wanted to comment. Great story, leave it to travel to bring out the, well, "best" in us eh? cheers!

Thanks for stopping by! When in Rome, right? Er, at least, near Rome.