She chose me, Jeté did.

It was 2004 and the most stressful period of my young career up to that point. I was living in Hollywood, helping to run one of the largest lingerie stores outside of New York, working 60-70 hour weeks for the most evil woman on the planet, barely sleeping, abusing my body with Red Bulls and lattes, and not eating much to boot. Long story long, I collapsed from exhaustion and my doctor gave me the choice between taking time off work or a hospital stay.

I chose time off.

And to get a pet.

I really wanted a dog. I grew up with animals and loved all our pets, cats and dogs and birds and horse alike. But our cats were never cuddly. They were aloof or bitchy or shy or feral (seriously). I'd never had a cat that felt like a cuddly furball who would melt my stress.

But I couldn't have a dog at my apartment. I have no idea why. Pretty sure my neighbor had a pet squirrel.

Nevertheless, I really wanted a pet. Was ready for a pet. So off to the shelter I went to just look at the cats. This little grey and white mangy, sickly little kitten was in the first cage. But she wanted nada to do avec moi, let me tell you. She pulled her little body up as far against the back wall of the cage as possible and looked at me like, do I know you, lady?

Convinced she wasn't The One, I moved on to a tangle of white kittens. As I cooed to the friendly white balls of fluff, I heard a loud mewling behind me and turned around to see grey and white paws stuck through the cage holes, batting frantically at the air, telling me to WAIT, COME BACK!

Girl had played hard to get. I knew she was mine.

Poor little thing was so sick. She had a bad cold. Is it awful that her little sniffly nose and kitten sneezes were the cutest things I've ever seen? But, a trip to the vet, a little love and some good cat food and her patchy hair started turning silky and her energy went through the roof. 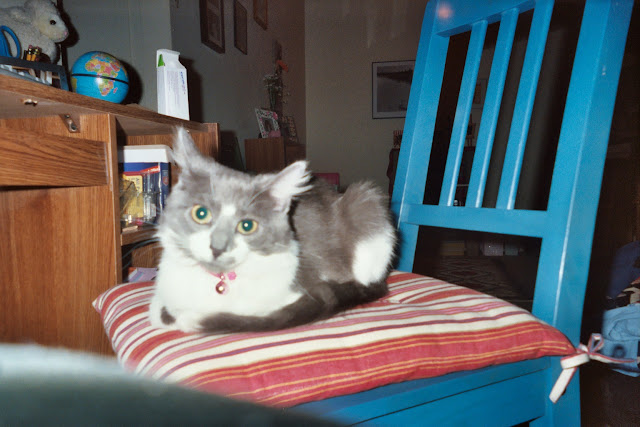 I'd had trouble naming her. I tried everything from cutesy human names to cocktail names (shut up, I once had a dog named Tequila) and nothing fit and she refused to respond to any of it. But she was quite the leaper. Even after she'd been spayed and needed to take it easy, I couldn't get her to stop jumping onto counters. Also I was a dancer. Once it occurred to me to name her after a ballet leap, it seemed that was her name all along. She approved.

In those first months, I'd come home from work and she'd come running out of my bedroom up to me and I'd pick her up and she'd nestle into my neck and purr and purr. Until she entered her teenage-hood. Then she was too cool for that. Duh.

My friends would come over and Jeté would entertain them, running around the house, using my kitchen stools as a jungle gym, eating up our laughter. She was all personality. A total ham. That's how you knew she was my cat.

Jeté was my saving grace. That was one of the hardest years of my life. From walking out on my first career to dabbling in TV production work to the betrayal of a friend to the death of a boyfriend to going back to school, my cat was the one to ease my pain at the end of the day. She'd crawl up on me, snuggling into my belly, and purr it away. It was impossible to be stressed or sad when she was making me laugh.

My ex, Joe, was an artist and we lived together, and so he had a room to paint in and had to keep the door closed so Jeté couldn't get in. One day, I got home from class to find Joe on the couch looking guilty. He said, "please don't kill me," and out sauntered my blue cat. Seemed he'd left the door open and she's laid on one of the paintings. A oil painting. After a very miserable bath (do you know how hard it is to wash out oil paint?), she was still blue. And would be for months.

Jeté had moved with me from house to house, city to city. She's had to share the bed with my lovers, met and loved and said goodbye to those who've come and gone out of my life: boyfriends, friends, roommates, has seen a boyfriend move in and out, and put up with the addition of a second cat. She's a trooper. 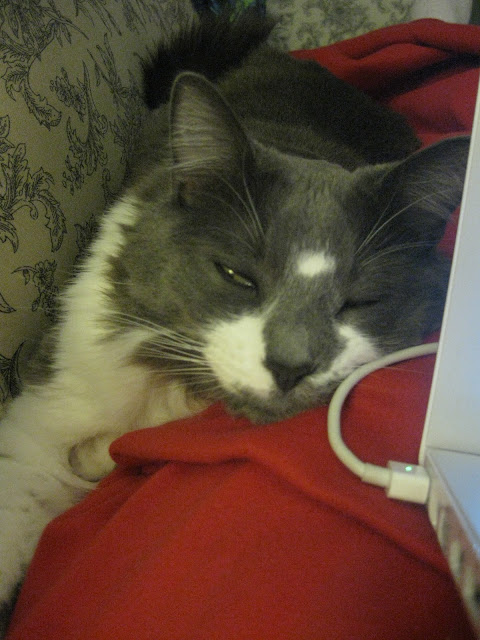 Now I feel like I need to be a trooper for her. If you've been reading, you know that she has a lump on her back between her shoulder blades. Probably caused by vaccinations.

I spoke with the vet finally and the results of her biopsy weren't definite. Suspicious cells pointing to low grade sarcoma. But, the could also just be granulation tissue.

I'm applying warm compresses (which she hates) and if it's granulation tissue, the lump should shrink. If not, it's sarcoma. If it is, we're looking at surgery (in evidently a difficult spot to operate on) and possibly radiation therapy (and I guess there isn't even a radiation oncologist in Portland.).

This is just so scary for me. I don't have children. But I have two cats who I love very much. They're not possessions; they're family. Family. I have no idea how I'll afford the treatment, but I'll have to try.

I really want to hope for the best and I'm trying, but I can't help preparing for the worst. So I apologize if I'm a little antisocial. What I'd really like to do is anesthetize with only happy things and cocoon until I wake up and find that this was a bad dream.
Email ThisBlogThis!Share to TwitterShare to FacebookShare to Pinterest

26 comments mean you love me:

This is a beautiful story. My thoughts are with you right now. I hope that all goes well.
Take care.

i've got tears in my eyes reading this. i love my cat so much and would definitely do anything in my power to help and care for him. my heart goes out to you but i'm going to keep only positive thoughts in my head in the hopes that the final prognosis is nothing but good.

be strong for each other!

thanks so much for your kind words, Boonie and Steff.

Ok I had to come read it anyway. I know exactly how this feels. Animals are not just animals, they are part of your family..they are your children. I have 5 furbabies...4 cats and a dog. I love all of them with everything I have. I'm sure your kitty will be fine, but if she does have a sarcoma, praying that it's easily treated! She's lucky to have a "mommy" like you.

Jete and I thank you, Amanda! you're right. she's my furbaby. :)

That made me tearful too! Sending happy thoughts and non-sarcoma vibes your way. My dog has been the one there for me, she cut herself a year ago and would not stop bleeding. When I took her to the vet ER, I thought I was going to die and would have done everything possible to make her better again (fortunately it wasn't that serious). Good luck this weekend

thanks much, Jackie! and glad to hear your dog is okay.

How sad :( it's crazy how much those animals become a part of the family.

That is a lovely story! Awesome how she chose you.:)
Pets should be part of the family! Why have them if you're going to treat them like furniture? I won't get on my soapbox here. :)

Thinking of Jete and you during this trying time.

thank you so much, Melissa! I absolutely agree.

Jete thanks you too!

so much love your way, babygirl. xo.

so much so much love you too xoxo

Sending good thoughts your and jete's way! They are more than "just pets" they are family who worm their way into our hearts and never let go.

Also, you may want to check out OSU and see if they have an oncology department or could maybe have lower prices for veterinary care because it is a vet school. Just a thought.

Like small children in that they trust us completely, love us unconditionally, and rely on us for everything.

They question nothing. They accept all. They love. They comfort.

Furbaby is a good word.

Clearly, your cats are your children.

And my prayers to you and Jete.

thanks, Kris. Jete and I both thank you.

I'm trying realllly hard to let go of the fact that this photo releaves you to be both a cat person and a mac person. double ouch. It's a good thing you're so fucking cool or I'd hate your face off.

it's a good thing you already showered me with tons of shameless flattery or I'd hate your face more. lucky.

This story gave me tears and goosebumps. As another mommy to furbabies, I understand just how much she means to you. Sending positive thoughts and healing vibes your way. *HUGS*

thanks so much, Elle! Jete thanks you too!

I totally get this. My cats have been through SO MUCH of the sucky part of my life with me. Way before Scott and kids were my three amigos (or gatos).

The good news? Cats are really odd and once we had a cat with a bump that the vet hemmed and hawed over. And one day she (brace yourself) bit it off.
The End.

(seriously. no more problem or bump. not cancer.)

ps. even if it's not a bitable bump, i've been through the gamut with my kitties and sickness. sometimes good stories and sometimes saying goodbye stories. so please please feel free to email or DM me. you and jete are in our thoughts.

thanks so much, Alex! you're the best!

Totally teared up reading about Jete. I never cry. Seriously. Never. I am a robot. A RO-BOT. Except when it comes to cat ladies and their babes.

oh thank you so much, honey. and thanks to Teva and Isabel too. Jete is sending all three of you purrs. *muah*