This is my cousin's adorable rescue dog Buttercup. She'll love you within an inch of your life and I'm pretty sure this is the most still I've ever seen her. And isn't she just gorgeous in that light?

See more here.
1 comments mean you love me
Email ThisBlogThis!Share to TwitterShare to FacebookShare to Pinterest

Photo of the Day: Around Downtown Portland

I don’t always take photos of flowers and cats. Sometimes I love me some architecture and a clear winter day in downtown Portland is especially lovely. The light gradient absolutely slays me. That sliver of light is just delicious.

2 comments mean you love me
Email ThisBlogThis!Share to TwitterShare to FacebookShare to Pinterest

I've converted to Doctor Who and I still don't understand why 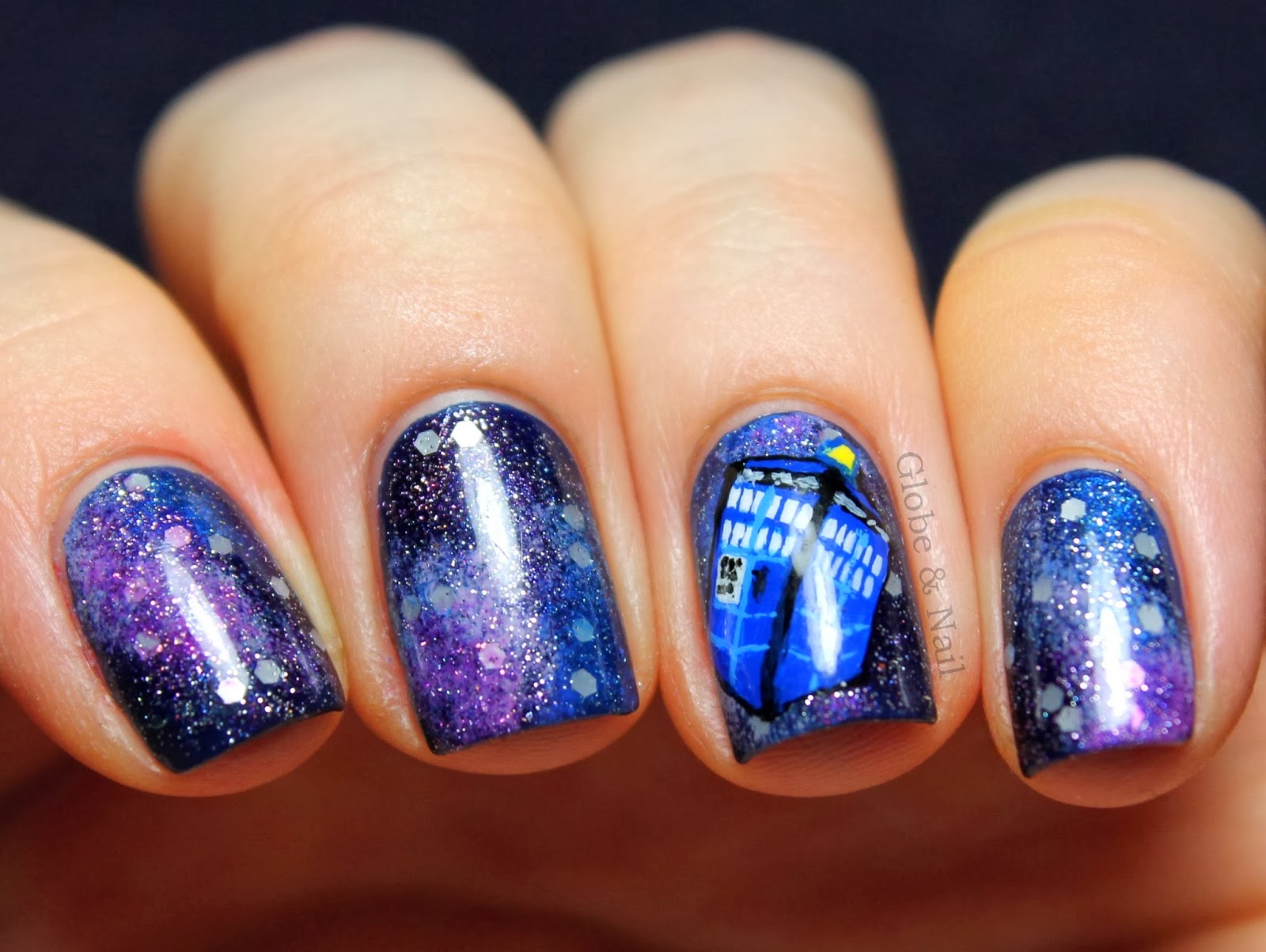 It finally happened. I have converted to the cult of Doctor Who and I'm still not sure why. I'm eons behind the rest of the world, but since it's a show about time travel, I think I'm off the hook.

I really have my cousin to thank. Granted, most of my friends call themselves proud Whovians, but she's always seemed more into Doctor Who than most. And I've given episode one (the 2005 version) a shot a few times and just couldn't get into it. I tried, really I did, but episode one was just so hokey that I couldn't stick it out. I resigned myself to never being into this pop culture phenom and assumed I just didn't understand its purported brilliance and that was that.

Fast forward to the last few weeks and the Black Death. After almost a full week of hacking and dying, I drug my sorry ass to urgent care where I found I had viral bronchitis and was told not to work for a few more days lest I infect the whole of my coworkers with the Plague. I complied, seeing as I felt like proverbial, not literal, shit.

But, seeing as I'd already been sick for a week, I was already getting a small case of cabin fever on top of my physical fever and so I was quite feverish and no amount of reading or SVU on Netflix could fix it (even though I do love Olivia Benson so, I can only watch so many rape stories. you understand.).

So naturally, I turned to my old friend the Facebook and asked for some suggestions of Netflix or Hulu shows that a sick, couch-bound girl could binge on and which I hadn't seen before. Of course, I received lots of recs for shows I already love or already hate and two recs for Doctor Who. Again, I thought, I want to like it, but I just don't think it's for me.

But my brilliant cousin, knowing me as well as she does (we're a lot like sisters, you know), suggested I not start with the first episode. She recommended one I'd like, which I did and which happened to be a two parter so of course I had to watch the next one, and then I decided to go back and watch from episode 2 forward and the next thing I knew? I was hooked.

It's been almost 2 weeks and I'm almost finished with season 2 and I can't stop. But I still don't entirely get why!

I did really like Christopher Eccleston and I really like David Tennant (even though it was hard at first not to picture him as Barty Crouch Jr.) and they're funny funny as all hell, which is really refreshing when you're watching a show about murderous aliens and the like. And don't anyone dare tell me what future Doctors are like. I'll find out on my own thankyouverymuch.

And it's certainly entertaining. It's funny and sad and sweet and sometimes a little scary. But it's also not that great. It's not particularly well done. Outside of the Doctors and a few characters here and there, the acting is really meh. And it's hokey. It's cheesy and the effects are rarely very good. 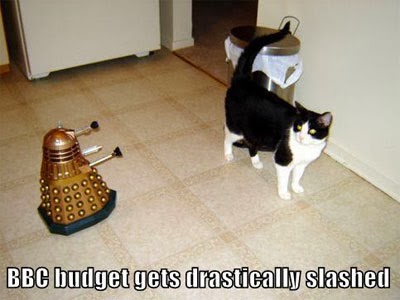 Also, Rose drives me bonkers. There are times I like her, but mostly I just find her annoying. Like, how many tubes of mascara did she take on the Tardis? 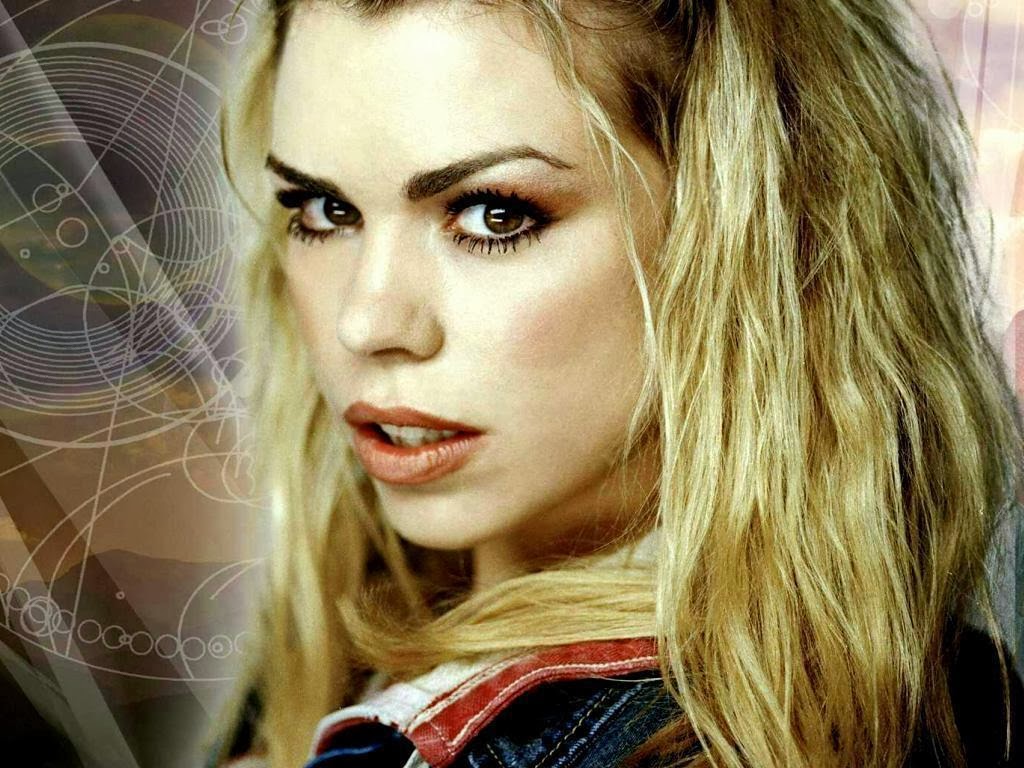 Oh and I did wonder, for most of the first season, why everywhere they went in time was either in the future or past UK or the people/aliens had a British accent, but then Rose explained that the Tardis translates any language, so it would make sense that they'd hear in an English accent. And then I saw the episode that was sort of in 18th century France, so that fixed that. 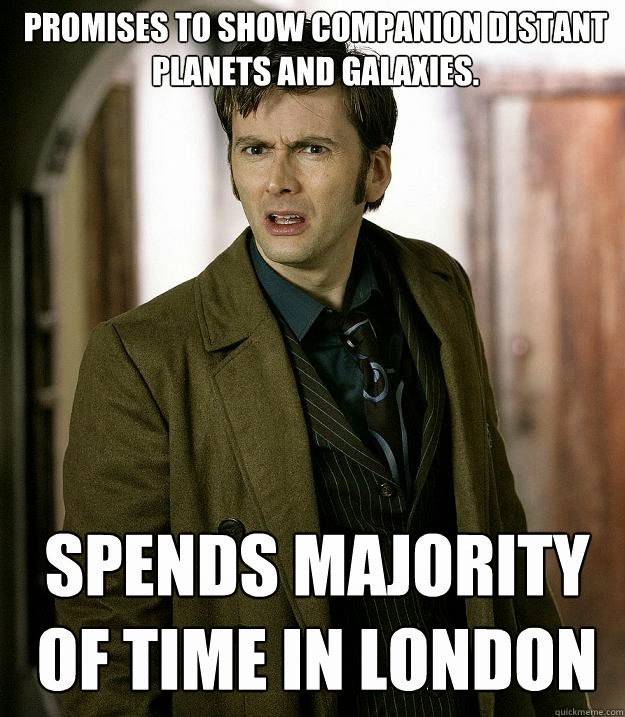 I also find it funny that many episodes are about mind control or world domination through television or technology - this from a television show. Ah well. Irony.

So why do I like it so much? It's 2014. I shouldn't like a cheesy, hokey show about time travel and rubbery aliens. But I do! I can't stop watching.

The only conclusion? Subliminal messaging. They're brainwashing me to like this show! It's the only explanation as to why it's so damned addictive. No wonder there's been so many episodes about mind control. They're practicing!

I kid. I kid. I love Doctor Who. Sure, I figured it out after everyone else did, but I'm making up for lost time. I should be all caught up in the next few weeks.


3 comments mean you love me
Email ThisBlogThis!Share to TwitterShare to FacebookShare to Pinterest