you don't even have kids

Last Sunday, for the 4th, Lynnette and I headed up to a large local park that sits above the city to eat dinner and watch fireworks. It's a place I love to go by myself and hike around and take photos. 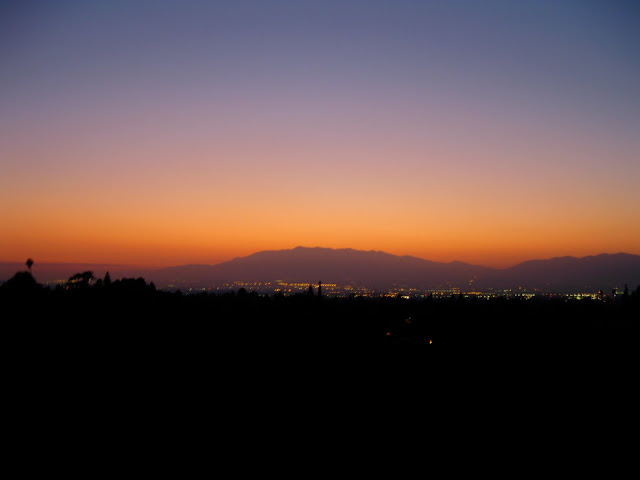 Sunset over the valley
Anyway, I'm not super patriotic and I'm not about to derail this post with my political leanings except to say that they're my own so please don't stone me. But who doesn't love fireworks? I certainly do. Fireworks are totes awesome!

I mean they're all sparkly and explodey and firey. Who doesn't love that?

So anyway, we went up above the city to watch the fireworks show, mostly because we wanted to avoid crowds, paying to get into the city-sponsored stadium show, and traffic. And it was a brilliant idea. We found a lovely man-made lookout and settled into a spot on the concrete with our blanket and pizza. We could see fireworks shows not just in our town but all along the valley. It was fantastic!

We even made friends with the other families there and had a generally kickass time, except for the monster Chernobyl mosquito bites I got on my back and the concrete made my ass and ankles sore. Which sucked. And made me feel old. Because you know that shit doesn't bother you when you're a kid, right? Like, you're just happy to see fireworks and be up past 9!

But no, I was all whiney about my numb ass and mosquito bites.

So anyway, after the show ended, everyone was getting up and as I was stretching out my sore back (SEE? OLD. LADY.), I groaned.

The lady who had been sitting behind me (who looked about my age, aka 30ish) complained that her back was sore.

I laughed and said: Yeah,  I'm clearly getting old.

And she said: ugh you don't even have kids.

So I replied: I would have them if I could.


EXCUSE ME? Like, that pissed me off, yo. I was totally offended.
I mean, I know what she meant to say was, You look young or something to that effect. But what she essentially said was that since I didn't appear to have children, I must, in fact, be young.
But what the hell did she know about me? I could have lost a baby for all she knew. For all she knew, I couldn't have kids. Or I could have had a child who died. Or I could have kids at home. Hell, I could have a 12 year old at home. SHIT, technically, I could have a 16 year old at home (I can do the math).
But beyond that, what does having kids have to do with anything? Yes, children wear you out. Yes, it's hard work. That's not what I'm saying here. I'm saying that I know plenty of childless people who live hard lives and age their bodies just as much as parents do.
I want children immensely, so I want to make sure this post in no way implies that I think parenthood isn't an awesome life choice. BUT, parenthood isn't a badge of honor that you get to lord over others with smug condescension. Nopetty nope it is not.
So now that this has turned into one spectacular rant, I should prob reel it back in. But you know? That shit pissed me the fuck off. I'd just like to see people think before they speak. Have a little compassion and tact before words just fly out of their mouths like flies did in that Mummy

movie (that was tres gross right?). Or like word vomit a la Mean Girls

.
What could it hurt to consider that maybe, just maybe you're not the only bitch walking the planet and that other people have lives and experience and histories that have nothing to do with you? Maybe, just maybe you might offend someone. Or hurt someone. With a little flippant ass fucking comment.
What would she have done if I'd replied, I did. Maybe I could have managed a small tear. Would she still have thought herself better than me? Or wiser or older or whatever it was she felt she had over me with her motherhood?
Well what the fuck did she know? Nothing.
As my brilliant friend Lynnette said, "People assume that just because their life is easy, everyone else's is too."
People: is it too much to ask to think before you speak? Really?
Email ThisBlogThis!Share to TwitterShare to FacebookShare to Pinterest

Rant on, Sistah! The douchecanoe shoulda been bitch-slapped for talking without engaging her brain.

I was a "late-bloomer". I didn't get married until I was 25 and didn't have my first child until I was almost thirty. That in itself is sacriledge here in Redneckyville. I spent five years listening to complete strangers asking me why I didn't have any kids yet, or asking if I was barren (really? Is this 1870?) or if the man had a low sperm count.

I usually turned it around and without answering their question, would ask what their favorite sex position was. When they were aghast, then I would explain that if they wanted to delve into my personal business, then I fel it was only fair to delve into theirs.

Ack! I hate assumers. (Yes, that's totally a word.) I'm whipping up a voodoo doll just for your tormenter and giving her the stink eye.

On the positive side, your picture is gorgeous and I love me some fireworks too. Or any bright shiny object.

Dawn, you rock my whole world. That is awesome. I wish I'd have thought of something that snarky! I'd always thought I'd be married by 30. Now I'll be surprised if it happens by 35. Eh. Oh well. Life is surprising ain't it?

First, yay you for posting words like explodey and totes and the like! Just today I said to my cat (yes, I talk, and he listens), "It sure has been a fireworkey couple of days!" ... Second, I have had the same kind of experience, and I am SO glad that there is someone else out there who realizes it's completely inappropriate and worthy of being PISSED!!!!! My story is long, but it amounts to the same thing, a woman telling me while I was at work (therefore, really no way for anyone to discern anything about my childless-or-not status) "just wait til YOU have kids..." Yeah. I felt just as you describe here. So thank you for writing out my rant!

Having kids so does not give you a badge of honor. If anything, it gives you a badge of stupidity and a slightly lower I.Q. Trust me, I have my own two kiddos. They suck every last brain cell from my head. Whatever is leftover, I promptly kill with alcohol. Why? Because kids make you drink! That's why.

(Before the hate mail begins, I love my kids to death and whatever I say, must be read with a very harsh sarcastic tone. Ah, fuck it. Why am I explaining this? Oh, that's right. I am used to explaining things to 4 year old boys.)

Tatyana- fireworky is a WONDERFUL word! thanks! I think there are plenty of us out there, but not the ones who speak up. UNTIL NOW! mwahaha!

Studio816-nice to hear that from a dad. thanks! kids make you drink, cats me make drink. life is hard all the way around. :D

No matter what, Butters* (*like, they butt in. I haven't had coffee yet, don't judge me) will always find a way to passive-aggressively make you feel like complete shit. I look like I'm about 17, so when I'm out with my daughter those bitches go "oh cute, you're spending time with your sister" and then when she calls me mommy they look horrified and shuffle their little brats to the other side of the playground as if teen pregnancy is a plague. Which a) it isn't and b) I WAS IN MY 20S WHEN I HAD HER.

People just need to sit DOWN and shut UP and mind their own business.

Ley, you're awesome! I look young too. I'm 30 and work at a university and am frequently mistaken for a student. I don't mind most days, but it gets tiresome when I'd like a little respect.

ugh, bleh. people are just so yucky. and to cheer you up, i give you: not my baby purty funny... even if you do want to have kids some day :)

thanks, Becky! you're not one of the yucky people :D

You need to stockpile a couple of zingers to use in case of a douche emergency.

I'll start you off with one:

How about..."I couldn't get pregnant after I was gang raped for days by angry militants in the war"

I seriously love this post. And your blog, which I just found. And the fact that you are moving to Portland, the town that might just be the best thing that ever happened to me. There are some people in my life who need this kind of response, only I never think of it in time to give it. A week or two ago, my sister-in-law (who married my brother when she was 20) asked my sister, "Do you and M. even WANT to get married?" (because I am 30 and my sister is, gasp, almost through college without being married). Uh...

thanks for reading! I am so excited to be in Portland. 5 days!

and um, your sis in law sounds...a little snobbish.