When I was a teenager, I fell in love with the sixties. Really, I did.

I didn't stand much of a chance. I was raised listening to my mom's British Invasion records and my dad loved Joplin

. *sigh* These were the sounds of my youth.

I was a teenager smack dab in the middle of grunge. It was the mid-nineties. Everyone wore plaid and No Fear and Doc Martens. Kate Moss sat listless on Calvin Klein posters looking like she'd just shot up. Garage bands were the regular thing (interestingly, I love nineties rock now). Nobody got excited or worked up about anything. Desert Storm had ended and the Twin Towers were still intact. There was nothing, from my peers' perspectives, to get worked up about.

I was bored. I wanted to do something important. Make a statement.

Somehow in these years, I discovered the sixties. Partly because of my fascination with my dad's photos from Vietnam (he was drafted in 1969) and partly the music (my first CD was Sgt. Peppers) and I decided I was born in the wrong decade.

I sought out anything having to do with the sixties and then the seventies (pre-disco years). I watched Full Metal Jacket

over and over. I watched footage of protests at Berkeley and DC and the Watts Riots. I discovered feminism and Civil Rights and politics. I read Gloria Steinem

, and the Communist Manifesto

religiously. I wore Grateful Dead shirts, an MIA bracelet my mom wore during Vietnam, and an old fireman's jacket of my dad's that I tie dyed and covered in patches. I devoured the ideas and ideologies of the time.

But the biggest affectations were the ones that pissed my mom off. I stopped wearing makeup (because it was suppression by The Man, don't you know) and stopped wearing bras (not that I had much to hold up anyway). I owned one bra in those years-the one my mom made me wear to church. All my friends knew if it was a truly cold day because I'd be clutching my braless chest, trying to keep my girls warm. I stopped doing anything with my hair (other than braiding in beads) because long and tangly was apparently a protest of some kind against traditional feminine aesthetic beauty.

So it should come as no surprise that I went to fashion school in 2001 and worked in lingerie for 3 years. The sixties will always have a special place in my heart. But, now bras and brushes are regular staples in my life. Aren't you glad?

Update: by request, a photo of me in high school: 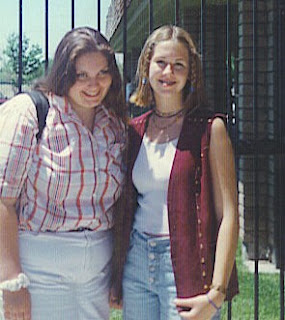 This is the only one I could find that was scanned already.
I'm the one on the right. The other is best friend and new roommate Lynnette.
As you can see, this is the beginning of my hippie-ish faze
(I was still working on growing out my hair).
I'm wearing bellbottoms and my aunt's leather vest that she bought in
San Francisco in the sixties.
Email ThisBlogThis!Share to TwitterShare to FacebookShare to Pinterest

Hey, if a decade works for you, it doesn't necessarily need to be the same decade everyone ELSE is living in!

I would love to forget all about bras....but now it's a matter of support.

yeah, it's a matter of support and also a little decency. I don't need my nipples hogging the show.

Well I was in college in the 90's and may have participated in a little free love of the 60's and lost my bra a few times, but I always started the evening with it on underneath my flannel.

Oh, I had this amazing giant gray flannel that I wore just about every day in the 90s.

Were you ever not adorable? I'm guessing you were still using a brush here. I love it (and Lynette's signature scrunchie around the wrist).

Gah. I'm old. And from Redneckyville. But there is a teenager in this house with Beatles posters all over her room, and she's still trying to decipher the meaning behind "I am the Walrus". And personally? Janis rocks. Hard.

Janis *did* rock hard. and I found the coolest graph for "I am the Walrus". I'll send it to you. :D

oh my gosh, Veronica and I consistently talk about how we were born in the wrong decade. I thought I should have been born in 1948 so I could have lived my teenage years in the 60's. I read the Feminine Mystique in high school and became obsessed with 60's culture. I still am. Love this post.

ohmigod I knew there was a reason I liked you two so much!