On Sharing the Road

When I moved to Portland, I knew I was moving to one of the most bicycle friendly cities in the country, but I didn't really know quite what to expect.

As a relative newcomer to a place such as this, where bicycles and cars clash on a daily basis, I think I have a fairly unbiased perspective. Even though I've yet to be brave enough to ride my own bike on the busy streets. To be fair, it's both the cars and intense cyclists which scare me. 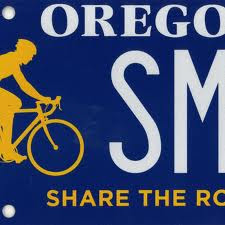 I came across an article the other day, which I now can't find again, in which this exact subject was discussed and comments went crazy on both sides. Either cyclists were pompous and entitled or drivers were reckless and determined to kill cyclists. No one gave a shit about pedestrians.

But there were a few comments that gave me hope. Some people actually recognize (gasp!) that bad cyclists AND bad drivers ruin it for everyone. Someone said the only place he'd seen bicycles and cars reside in harmony was in Amsterdam, proving yet again that Amsterdam truly is Utopia.

Back to me, though (as always). This is what I see: both factions are fighting a war against each other. When it should be against the assholes who give us a bad name, whomever "us" is.

I've seen plenty of cyclists behaving badly. I think you aaaall remember the douchecanoe from my birthday.

I see why drivers get pissed off. Bicycles will dominate the roads riding 2 and 3 side by side, blow through red lights, cut off pedestrians, and ride sans any lights at night. There has to be a sense of entitlement that makes these people ride so recklessly, that makes they drive like they OWN the road instead of sharing it, but mostly I have to wonder if they're masochists.

As a driver, I'm just afraid of hitting these people! I don't want to hit them out of spite or something. And they're likely to die whereas my car is unlikely even to dent. But I don't want them to die, lard no. But how am I supposed to drive when I'm constantly dodging cyclists with an apparent death wish? Then they call drivers assholes.

Well, it won't be my fault when they die under my car, but I'm sure the police won't see it that way. Nor will my sensitive conscience.

However, I see considerate cyclists too. These are the people who should be pissed at the asshole cyclists. And, so far, these people seem to be more the "use a bike just to get around" types. The types who it might be an inconvenience to actually stop at a stop sign because they're not pro and it sucks to stop the bike and put their feet down and then get going again. BUT! They do. They stop. And wait their turn. And have lights on their bikes. And make room for cars on the road as well.

To be fair, there are asshole drivers too. Obviously. They piss everyone off,  not just the bicycles, trust me. The asshole drivers are a huge part of why I'm scared to bike myself around this city. I know it's frustrating to deal with so many forms of transportation, but I think it's worth remembering that cars can mow over bicycles. This doesn't mean cyclists should use this knowledge to own the road, knowing no one really wants to kill anyone. But human nature is fragile and road rage real. I know. I lived in Los Angeles.

I would be more careful if I rode my bike. Just sayin.

So what's the answer? Fuck if I know. But dudes, does it really hurt to just obey the rules of the road? Why can't both the bicyclists and cars be considerate? The rules apply to everyone and behaving like as asshole just makes everyone else behave like assholes. 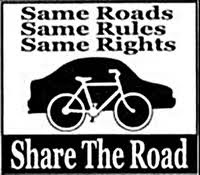 Maybe by spring I'll get brave enough to use my bicycle. At this point? Too scary.
Email ThisBlogThis!Share to TwitterShare to FacebookShare to Pinterest

17 comments mean you love me:

btw - i found that coloring book at the downtown powells - so i bet you could find it fairly easily!!!

and regarding bikes...
use the side streets!!!
not the main roads. i lived off NE alberta, and i always rode a block off the road, no matter how annoying the stop signs are. it's just less traffic - and also less 30-mph bikers who zoom by me and scare the crap out of me on their freakishly skinny road bikes - i've got a cruiser from '69 or '70 so it doesn't have "fast" as a setting, really...

It's a similar situation in Los Angeles near the Los Feliz area where the cyclists often are the biggest A-holes on the road. I side with the drivers on this one.

These kinds of confrontations really pedal me off.

my cousin is newly transplanted Portlandian (is that what you guys call yourselves?). i know he's a hardcore cyclist, though I don't know how impassioned he is about this debate.

Holy crap!! It's the fucking same here in Seattle. I almost got hit by a bicycle while crossing the street...IN the crosswalk when I had the light. This a-hole was going so fast that if he had actually hit me I shudder to think how long I would have been in the hospital. And, side note; what's with all the gear like they are actually IN a race when clearly they are just on their way to work?

Satan- yeah I could do that. but it's also the cyclists who scare me. and crossing big streets too.

Israel- I know! I used to live in LA and know that area well.

Liz- I'd be curious to know what he thinks about this.

What ever you do...do not try cycling in Dublin, Ireland... unless you want to get run over by a double-decker bus of course. Side-walks are the only way to cycle here. Have too many friends that had too close encounters with cars, pavements and other much harder objects then themselves.

What is wrong with proper cycle paths, i.e the ones you share with pedestrians? They work and are safe for all. Ahhhh maybe I should just get soft bumper protection all around the car...

I'm all about pulling up behind the asshole on the bike and honking my horn at them to scare the shit out of them. Works good for me.

I am finally getting around to reading your blog. Nice writing chica!

Nush- don't laugh. but I was so excited to ride the double decker bus in Dublin. hah! here, the bicycles often have a bike path right next to the street, but often they share the road right with the cars.

brandy- well thanks for reading! I'll try the horn thing next time. ;) or maybe I'll get a horn on my bike.

:) The double decker buses rule the road. Don't tell but I was pretty excited myself the first time I was on one. :) The Dubln busdrivers however are something special... they all think it is a Ferrari they are driving. I have seen my share of bus wing mirrors flying by the window. :D

There is plenty of shitty driving and riding going around and now that I am doing a lot more riding it helps me know what to be aware of when i'm driving, but also what to be mindful of when riding. Your right, there is this crazy sense of superiority from some riders and it makes you want to run their ass over.

and makes me scared to ride my bike!

We have this pro-bicycle group here in New York City called Critical Mass. For the most part, they are lovable pot-heads who come outside every Friday of the month to show off their goofy bikes. But 25% of the group are these crazy, punk-arsed, militant bike protesters who ride to "defend" their right to take over Manhattan. They stop traffic, cause fights, and are generally so totally annoying that many people actually hang out at Union Square to see how many will get their heads bashed in with night sticks. See? The car/bicycle clash exists everywhere. In NYC, though, there is no room for anyone!

I think we have Critical Mass here too, but it's more like a one-time event thing. I think.