Happy New Year and happy Sexy Saturday! I am so stoked to start this new year off with a guest post from one of the coolest chicks I've met in a long time and who has become a fast friend. Satan (Mel) of satan goes to sing-sing found my blog first. I forget exactly how. And soon I was reading her blog. Then we were friends on flickr and then redbubble and then twitter. It seems we can't get enough of eachother.

And I swear, every day I discover something else we have in common. She used to live in the Portland and now lives in New Orleans (which you should know has a very special place in my heart). Plus she's a fabulous writer and dancer and loves leg warmers! She's a stripper (which I find super cool), and, I'll be honest, out of the few strippers I've known, she is by far the most down to earth and cool. But I also love that she's open about The Sex and loves both the boys and the girls as I do. Plus? She's kind of a nerd (in the best way of course.) and loves photography!

Anyway, I think you'll love her post. You should read her blog and find her on the twitter. Check out her work on flickr and redbubble too.

Once upon a time, there was this lovely lady – oh, who the fuck am I kidding!

Nah, this is a tale of how I, Satan, came to be dating the current Boy, Matt.  It has a bearing on our relationship to this day, mostly because we still can’t figure out when the hell our anniversary is, and we’ve been together for 2 years, come Februaryish.  We have somewhat arbitrarily decided on a date now, just to tell people, but really – we have no fucking clue.  (For the record, yes, he does know I’m writing this – I’m pretty sure he’s resigned to all the blogging-related oversharing that I inflict regularly…)

I used to live in Portland, Oregon, like Andy does now, and it was a lonely time for me.  I had a fantastic time because it’s Portland, but I was lonely.  Perhaps it was because I was poor and hardly ever went out, but I was tired of being alone.  I eventually turned to the Craigslist personals ads, to find companionship other than my misanthropic roommate.

First, I scoured the women for women section, extensively (for months).  Not that I don’t like The Menz, but it just seemed a lot more daunting to talk to them on the internet, especially on Craigslist, and who doesn’t like a girlfriend?  ; ]

I had a lot of interesting encounters, some of which ended in sex, and some of which ended in friendship.    And although it was great to make new friends, I was specifically looking for someone to fuck on the regular, and so far, nothing had worked out.  I didn’t want someone to date, as that seemed completely impossible to me at the time – I was still terribly, painfully in love with my ex (and sometimes, still having ex sex, so… yeah).  And I didn’t want to inflict my melancholic rebounding on any relationship.

I perused a few posts, none of which were in any way attractive, and then came upon this post, or rather, this picture: 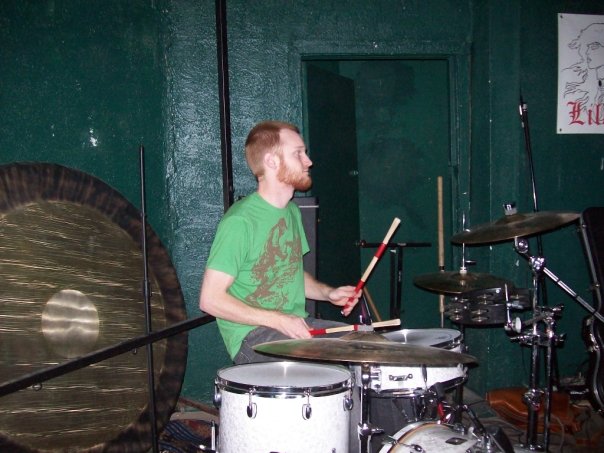 Truthfully, I read the words after perusing the photo.  Redheaded musician-type boy?  Yes, sign me up for that date.  I believe the ad mentioned something about liking beer?  I have no clue.

So I emailed him (through my work email account, natch) and we ended up setting up a meeting at an Irish pub.  Fitting, for the two redheads.   We got along well, had a couple of beers, and then Matt bugged out rather quickly.  I invited him back to my place, probably insinuating something about having “Naked Mel Sexy Funtime,” as Matt put it just last night, but he was NOT biting my bait.  Instead he told me he had a fun time, and to call him if I wanted to hang out.

In my head I might have been a bit miffed.  “Hang out,” he says?  My ass, even if it was apparent that we would get along well while hanging out.

It took two days for me to call him back, because frankly, I’m used to people calling me.  It’s not that I think I’m above calling someone, but I’m just not as used to it.  But he seemed happy to hear from me, so I headed over to his house to “watch a movie.”  Of course, I had no such thing in mind.

I remember meeting Matt’s cat Roxy (who couldn’t stand me at first, jealousy, maybe?  Haha, I got all the attention, Fuzzbutt), and I remember us smoking hookah, and watching some movie.  I don’t remember what the hell the movie was.  To be fair, Matt doesn’t either.  In his words, “To me it seemed like you were intentionally brushing up against me, and sticking your boobs against my arm – it seemed very intentional.”

Well.  I don’t remember any intentional tit-rubbing, but he wasn’t exactly wrong about the former.  So of course our hookah-smoking and movie time devolved into a very long makeout session on the couch.

Eventually it became obvious that we either needed to move onto a bed, or fuck on the couch – and seeing how he did have a roommate, and his house had a large picture window in the living room, we opted for the bed.  And we fucked.  It was that kind of explosive, first time sex that rarely happens, but is great when it does.

I got up to piss afterwards, and started laughing a lot when I saw myself in the mirror.  I might as well explain now that I am fairly fucking allergic to cats (UNFAIR, I love cats), and Roxy did get on Matt’s bed.  So cat dander + Matt’s beard + rough sex definitely equaled me breaking out into very small hives all over my neck and shoulders and tits.

I asked, and he says he remembered being kinda scared for me because of the allergy, but not much else about that night.  This doesn’t surprise me, because he was starting to doze, immediately after he came.  I told him I couldn’t sleep there, because of the cat, and he was like, “Well, then we better go to your place.”

I had expected him to drop me off, or say, make me walk home (to be fair, it wasn’t all that far to my house…) but instead he came in to my house with me, and stayed the night, which was fantastic –  I will freely admit to being a snuggler of very large proportion.

And then we all lived happily ever after…

Yeah, right.  Actually, we were fuck buddies for most of a year, with interruptions (when for reasons that still boggle my mind, he decided to date a lady who was even crazier than I am…) here and there, while life happened.  I hadn’t wanted a relationship out of him, and it wasn’t one, for quite a while.  We both saw other people.

But shit happens, and sometimes life blindsides you, and at one point we decided we were dating – and we’ve been in an open relationship, ever since.

All’s well that ends well, in my book! 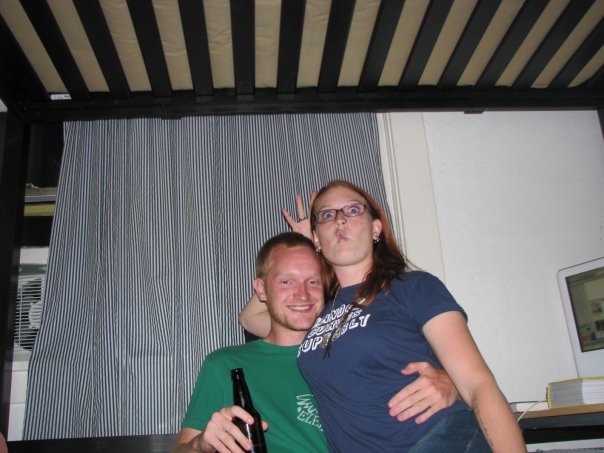 What if she got a redhead girlfriend? That's a whole lotta recessive genetics up in there.

Satan, my sweet! (Words I never thought I'd type all in a row.)

Yay interwebs for bringing together coolness!

thanks for posting, Mel!

thanks for the comments, all!

He's so cute! I love the drummers, too. :) My first boyfriend was a drummer.