My older cousin Stacey is coming to visit this weekend and I am so stoked! I haven't seen this lady in forever and I just know we're going to have a blast.

I haven't talked about Stace much, mostly because the woman is so busy I don't remember the last time I saw her. And that's back when I lived in California.

But it's really about time I did. My two cousins and I are like sisters and I love them like sisters. We certainly have a sisterly dynamic and we've each lived with one of the others at some point in our childhoods. But more than that, our moms are sisters and each had only children and wanted the three of us to be close.

Stacey is definitely the eldest sister. She's 5 years older than me and the story goes that she was there the day my parents picked me up from social services and she didn't understand why I wouldn't play with her (I was 3 months old). I was definitely a toy for Stace in my younger years and I ate up every minute. I worshipped her. 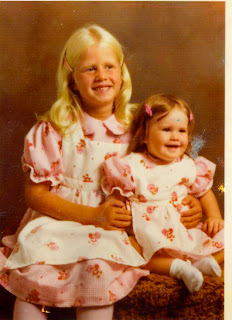 Once, when I was two, we were visiting Stace and my Aunt Paula, and when it was time to leave, I apparently threw a royal fit. Cried like it was the end of the world, as two year olds do, because leaving your favorite person is akin to a world-wide disaster when you're two. Well, Stace went in the house and found her favorite pink doll and gave it to me. That was Pink Baby and I carried that doll everywhere until I was much too old to be carrying a doll everywhere. In fact, in later years, when I was Stacey's annoying little cousin, she threatened to take Pink Baby away in order to get me to leave her alone.

I still have it. Damn thing looks like a faded pink monkey that was left in the rain now.

I am definitely the middle child. In childhood, I vied for attention from Stacey. Lindsey is definitely the youngest and back then I hated that Stacey would baby her. There's this old reel film of us after Lindsey was just born and Stacey is fawning all over Linds and I am pouting the most spectacular of pouts. I still think if they'd only let me near the baby I wouldn't have been so jealous.

Of course, over the years, Lindsey and I got super close. We're close in age so we spent a lot of time together growing up. These days, I count Linds as one of my best friends too.

Back then, I wanted nothing more than to not be the middle child. And to be blond like them. Being adopted, I hated my brunette hair in the middle of my two blond cousins.

And if you have any doubt about our sisterness, you should just see ALL the matchy photos we had to take every Easter and Christmas. Oh yeah.  Poor Stacey. Being the oldest, she bore the brunt of the uncoolness of it most of all.
My Aunt Paula (Stacey's mom) had cancer for the whole of my youth and during a chunk of that time, Stacey lived with us. By that time, Stacey was my very cool older cousin and I was the annoying little sister. When she played house with her friends, she made me be the dog. The dog! Which, of course, I was happy to be just to be able to play with her and her friends.

Then, of course, I'd retaliate with Lindsey and when we played, I'd make her be the boy. We both still bear the scars of that. THANKS, Stacey.

Of course, by the time adulthood rolled around, I'd pretty much grown out of my big sister worship, but I hung on probably a little too long than I should have. Stacey was so pretty. Stacey was so cool. Stacey had all the best clothes.

Stacey's mom passed when she was 12 (miss my Aunt Paula so much!) and left her a decent inheritance to get her through college, etc. But in my teen years, if Stacey was visiting, that meant shopping! Linds and I both had pretty meager households so those shopping trips were heaven to us and I think Stace liked spoiling her little cousins.

Even though I'd grown out of my childhood worship of Stacey, she still gave me a lot of my first experiences with the world and instilled in me my love of travel. We lived together when I was 21 in Hollywood and she was my introduction to the big city. Most of my friends at that time were her friends and they all treated me like a cool little sister.

That time wasn't perfect. She and I bickered like the sisters we'd forgotten we were. But we both learned a lot about each other. She and I are totally different in a lot of ways. And sometimes it did get old sometimes when Stace would get drunk and grab my cheeks and talk to me like I was 5 again. Yeah, that was fun.

Stacey took me on my first trip to New York, thus beginning my love of New York, and encouraging my attempts to move there after fashion school (that didn't happen as I decided to stay in Los Angeles instead). She got my my first gig in television and supported me completely when I decided to go back to school, which meant moving to a small college town.

She also took me on my first trip out of the country (not counting Mexico) to Costa Rica. She was going with her boyfriend and he landed a production gig and wasn't going to be able to stay the whole 2 weeks. So who got to go so Stacey had someone to cavort around with? Me!
Stace pushed me to live abroad (she lived in Spain when she was in her early twenties) which was one of the single-most transformative experiences of my life. I grew so much in that time. And when I struggled abroad with homesickness or language barriers or tough professors, she was there to understand.

These days, the three of us live very busy, separate lives. Linds and Stace are still in Los Angeles and I couldn't feel further away from that world. Stacey is notoriously harder to get a hold of than Carmen San Diego. But she'll always make time when it's important. She continues to be incredibly supportive. She lost her pug Eddie to a kind of brain cancer a couple of years back and has been a great resource for me during the whole cat cancer drama.

Stacey, Lindsey, and I will always be more than cousins and slightly less than sisters. I love each of them immensely and individually. I only wish Stacey would pack Lindsey in her suitcase and bring her along this weekend. Yes, ladies? Think that could be arranged?

Stacey will hate all these childhood pictures. That is my revenge for having to be the dog all those times.
Email ThisBlogThis!Share to TwitterShare to FacebookShare to Pinterest

23 comments mean you love me:

You are so right about being the middle child.

There is something so special about having someone in your life to share childhood stories/trauma/golden moments.

I hope she sees this post. It would warm my heart to see this from my sisters.

This has to be one of the best blog posts I have ever read.

This was a great post! I can relate...I have four sisters, and I wish, wish, wish I was closer to them!

I was referred to your post by Laura of Literary Legs (see above comment) because you and I both wrote posts about family dynamics this week.

I very much enjoyed yours. I'm glad you got over being the dog.

Empress- I think Stace reads my blog, but I'll have to see if she read it. :)

OT- wow. thanks so much!

Laura- I don't know if I would be so close to my cousins if we were actually sisters. thanks!

Brandy- aren't we the best?

Lauren- welcome and thanks! yes, being the dog was quite the burden. ;)

Aw. That's so nice you're so close with your cousins! My family is very much like that too!

This is a sweet post -- love the old photos.

But most of all I love the last two lines. I laughed out loud!

Have a great time with your "Sissy."

I'm an only child, but sadly my cousins are all way, way older than me.

It sounds as though yours are amazing - I hope you have a fantastic time together!

I can't believe you grew up with hair that gorgeous and felt envious over anyone else's hair.

Ummm, yeah, my oldest sister is 7 yrs older than me and I ALWAYS want(ed?) to be her. She's still totally my role model and SOOOO freaking awesome. And yeah, she's half black, and since I look most like her out of all my siblings, I would concoct stories when I was younger about how her dad and my mom got back together to have me, because I was *obviously* sooo much like her. I wanted to be half black sooooo soooo bad. I wanted her dark curly hair more than ANYTHING.
But yay for awesome sisterly role models

The worst thing about Matching Outfits is that people are stupid enough to think that you resemble eachother more when you wear them! My sister and I look nothing alike, but people used to ask us if we were twins. Morons.

I wish you girls a fantastic time together!

And I chuckled at the Olan Mills photo. If that isn't a "Child of the 80's" type thing!

That closeness is so precious. Nothing beats it.

Alyson- thanks! though she would kill me if I called her that.

Megan- all our older cousins are like a generation older, part of why we're so close. :)

Jackie- you want what you don't have I guess! love my brunette locks now. :)

Keri- right? I'd get mad when people saw the pics and thought Stace and Linds were sisters. made me SO jealous!

Liz- do they have Olan Mills anymore? :)

Lucky you! I grew up on the other side of the country from my cousins, and so I hardly know them. One is getting married this July, and the last time I saw her she was 10! Another had a baby last Christmas, and I can't even remember which side of the family she's from! And I'm the one charged with maintaining the family genealogy. Not a good start, eh?

Enjoy your time with your cuz!

I have cousins like that too, that I don't even know their names. :)

Love the contrast between the old and new photos, and seeing how you gals grew up over the years but kept that same sisterly dynamic.

I know right? it's pretty amazing. thanks, love!

So, somehow I missed this one the first time you posted it. it made me feel all warm and gooey. :-) Love you, cousin!