Around our house, cat toys are aplenty. Believe me. These two are super spoiled.

Even more so when I worked more than full time and I feel would feel guilty leaving them alone so much (Yes, I am insane. I realize. Moving on.) and could afford to, I was always buying them new toys. Every time I went to the pet store for food or kitty litter (which is the utter bane of my existence), I'd get a new toy. Every time I went to the grocery store for all those kinds of things one goes to a grocery store to acquire and subsequently consume, if I spotted a cute cat toy they might like, I'd get it.

I had a problem.

So you should have no doubt about the oodles of love I shower upon my felines.

Don't get me started on Jeté's blankie. Yes, she has a blankie. It's a long story and I finally took it away because the thing was disgusting because she drug it everywhere.

They don't get many new toys these days but they do have a toy box. A cloth orange box I purchased for five dollars at Ikea. They know their toys are there and I know when they've dipped into the toy box because it's been tipped on its side. Well, it's probably usually Hobbes because he's more playful and he's a strong effing cat and he likes to tip things over just to see what's inside. Like the trash can, which, incidentally, is not filled with toys.

But they don't often dip into the toy box these days. They prefer to steal pens and jewelry or any other small object that catches their eyes. Back in California, they'd lose all their toys and look at me like I just needed to supply new ones. Then I'd find huge piles of balls and mice under the couch and against the sliding glass door where they'd inevitably end up in the midst of playtime.

However, they've been less playful of late. I now blame that on myself for not supplying them with endless toys and not taking enough time to play with them. I chalked it up to Jeté getting older, but she's only 7 and despite having cancer, she hasn't presented symptoms yet so cancer shouldn't really be slowing her down yet.

It's really my fault.

The other day, my bestie and roomie tied a shoestring to one of their mice toys, an old realistic-looking white mouse who'd lost its tail and eyes long ago that has a small rattle inside, and blew their minds.
To be fair, they do have another mouse that's tied to a shoestring which I made years ago. But that toy is old and boring and the mouse tied to it is cheesy and fake and the shoestring decimated from hours of cat killing.

This toy! is new! and exciting! and new!

They've been going crazy. And getting tons of attention because both Lynnette and I play with them avec said toy all the time. AND, don't tell him I told you, but I supect the other roomie is playing with them too sometimes.

Jeté and Hobbes are in heaven.

All I have to do is rattle the little mouse and they come running. 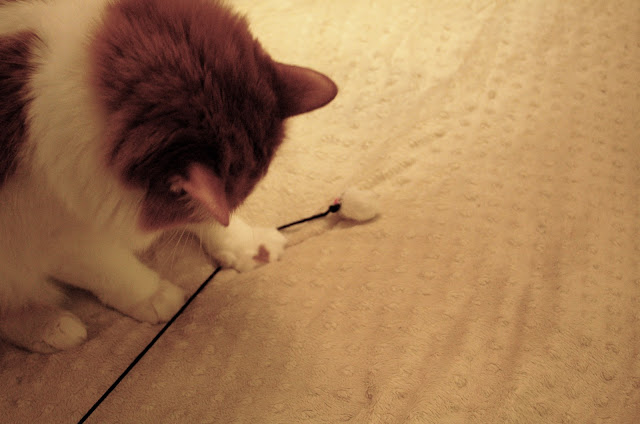 I drag it around the house. I wave it around in the air (which is their favorite part). I play keep away between them.

Hobbes is more fascinated with the mouse. How is that thing flying? Ce n'est pas possible, he thinks. Or, he would if he thought in French. I suspect he speaks Pig Latin, but that's just me.
Jeté is more fascinated with the string. She knows the string is attached to the mouse and she is determined to destroy it. In fact, I've found it dismantled from the jaws of Jeté several times and tied it back together. She's the smart one in the operation and she knows it.
I've even woken up and found the toy on my bed, a not so subtle hint to wake up and play with us, woman!

Sometimes Jeté will meow at me mournfully for no good reason. I check her food and water. Nothing. I try to cuddle. No, not cuddle time. So I ask her, "Where's your toy?" And she'll take me to it. Playtime. NOW! 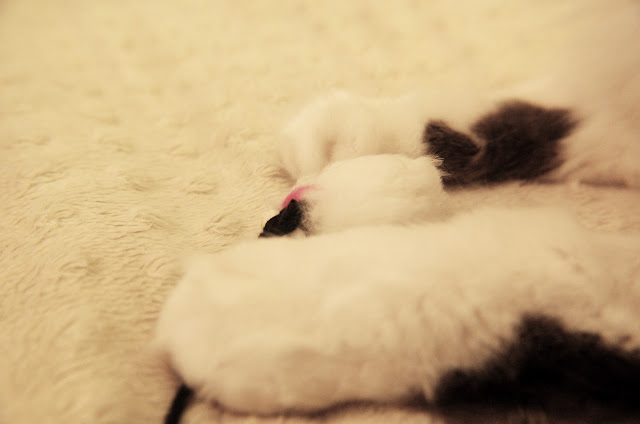 They've been addicted to the new toy and both of them have been bounding with energy. One new toy and they're totally different cats! It's really a joy to see and it's making me take the time to play with them more. Quality time for both the kitties and moi-self.

Since Jeté was diagnosed with a sarcoma, I have made a point to never turn down cuddles. She gets as many as she wants when she wants because I don't have much time with her left and I'm going to miss stroking her insanely soft fur and she purrs like a Hemi. But more than that, I know I'll regret not giving her as much loves as possible.

It just didn't occur to me to give her as much playtime as possible too. And playfullness is the first thing she'll lose. 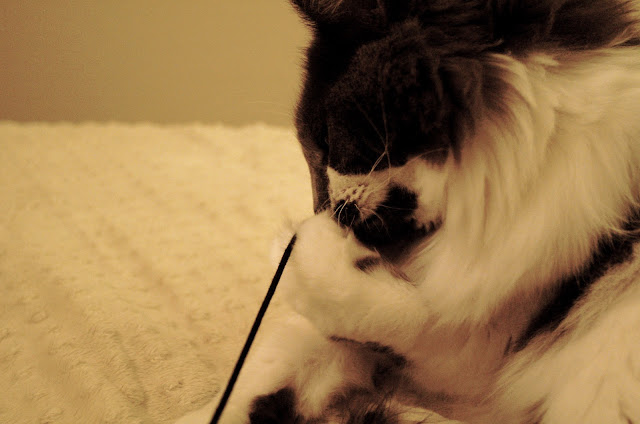 So, for now? Thanks to their loverly benefactor Lynnette. Because we are going to play as much as possible.
Email ThisBlogThis!Share to TwitterShare to FacebookShare to Pinterest

14 comments mean you love me:

My wife and I used to spend wayyy too much $$ on cat toys - that the cats never enjoyed. It was always the random string or crumpled up paper ball that cost nothing that really won his favor. Go figure :-)

they can be like that sometimes. their fave is an old box. so I put carpet scraps in it so they can scratch. they love it.

I won't mention that not only do we have a basket of cat toys as well, but the cats each have their favorite, and will dig that specific one out from the rest.

I won't mention it.

My house is full of cat toys.

My brothers cat even loves lasers and will chase a laser beam to hell if she could.

Santa brought here a new laser that you turn on the beam moves by itself all over the room. One day his cat is going to die from a heart attack from chasing that darn laser.

Animals can be so much like kids! Wanting "toys" other than their actual toys!

Jazz has a mouse just like that one, rattle included. it's the only cat toy she will play with! other than that, she only likes balls of paper. I've bought so many toys that she totally ignores. sounds like she's the opposite of your kitties!

these photos are lovely

So, so cute!! I love watching cats play. They really know how to do it with flair.

I know all about buying too many toys... my cats have more than a few. I normally find a whole horde under the sofa waiting to be retrieved.

I really wish we had a ceiling fan that we could tie the string too, and watch Hobbes run around in circles after it. Although I can also picture one of them getting their paw caught on it and flying around in circles with it, so maybe that's not the best idea. I love the picture of Jete licking her chops as she's about to dig into her hard won snack. (and don't tell, but your other roomie enjoys making Hobbes jump for the mouse).

Do you know what breed they are? I keep meaning to ask you.

Oh, and I'm so glad someone else uses "avec" as if it's completely normal.

My cat loves anything on a string. Cat toy or not. And if you put it away, she'll walk around the house meowing for it.

Psych- too late! plus? that's adorable.

OT- I would be frightened of what demons these cats would become were I to get a laser. yikes.

Liz- right? they are like having kids. and mine are almost as high maintenance. but at least you can bribe kids. hah!

Skye- sounds like it. but they do love those rattly toys! hee!

Nush- thanks, darlin! I love watching cats play too. but adorable and vicious.

meleah- aw thanks! they really are. :)

Lynnette- right? poor Hobbes would have a heart attack. he does like the other roomie though. hee!

Sarah P- just domestic longhairs, mutt kitties. both were rescues. and bien sur! I am fluent in Franglish. hah!

Brandy- THAT is hilarious. what is it with cats and string?

I think I'm addicted to buying cat toys. Every time I go in Petco to buy food or litter, I usually leave with a feathery, crinkly toy for my two ladies.

The best toys I have for them, though, are the laser pointer and this baby: http://tinyurl.com/4m4uf5w

We call it the Busy Station, because it keeps Caprica (the resident troublemaker) busy (and out of trouble) for hours on end. It's seriously the best cat toy I've ever purchased!