I'm not in California anymore.

Never has this been more evident than the last 2 weeks. If you've ever had to deal with the California DMV, you know that whatever it is you need done will be a daunting task.

Need to get your emissions tested? Need to register your car? Need to apply for a driver's license? Need to replace a license?  Expect long lines and surly employees.

Need to do more than one thing? Expect to spend at least one whole day at the DMV.

It's painful. But part of life.

As a new Oregon resident, I needed to get a new driver's license and register my car.

First step? Get my emissions tested. Which I blocked out hours for. Because that's what you would do in California.

It was the easiest process of my whole life. In and out and the employees were so freaking chipper and friendly, I thought maybe I'd landed in Oz.

First step? Drivers license. My number was called up so fast I missed it and had to ask for a new number. Seriously. I wasn't expecting to get called up right away. I paid my fees. Showed my documentation. Took a written test. Which, is all fancy now. I haven't taken that test since 1996 and let me tell you. Fancy. Then the eye test. Then they hustled me over to get my picture taken (Which turned out crap of course. Why do I make the weird faces? WHY?). And I was done.

And with the exception of the guy who issued my eye test, who was terrifying, everyone was super duper friendly. Bizarre. I thought it was a national law that DMV employees hate their jobs. I mean, I would. I would be all surly and unpleasant. Just because I could. Maybe eye test guy had transferred from another state. Because he was scary.

The one hiccup was that I couldn't get my car registered. Turns out (and they didn't post this online) that I need more paperwork on the title of my car (because, you know, the bank owns it) that I didn't need in California. So that's gonna have to wait a while. But they were even nice about that. So weird.

They say keep Portland weird. And they mean it. I think this qualifies. 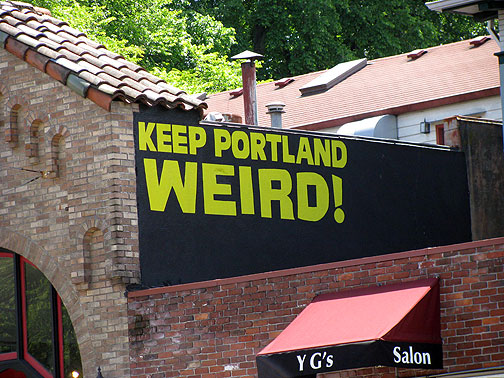 i have yet to get my TN license again, even though we've been back 2 years.

i'm glad the living is easy in portland!

I have a t-shirt that says "Keep Eugene weird!" I love Oregon for so many reasons, but it's weirdness is definitely one of them!

wha? Freindly DMV employees exist? Portland, you sure are weird!

Nice DMV employees? Maybe it's a sign of the apocalypse. When I took my driver's test for the first time, the lady belittled me, yelled at me in front of everyone in the DMV, and then lied about why she failed me. Seriously. I called the other office and they looked it up on the computer. She told me that I failed because of speeding (which I wasn't - that argument led to the yelling in front of strangers), but she put in the computer that I failed my three-point turn, which she clearly told me that I did beautifully on! That lady made me cry. It's been over 10 years and it's still painful. Maybe I should move to Oregon.

thanks for all your comments! I know right? it's so bizarre. I'm not complaining though!

Colleen- seriously? that woman was on a serious power trip. that's just wrong, yo!

Isn't it amazing when people are just nice to you how freaked out it makes you? Like the universe tilting on its axis.

Stop trying to make me love Portland by telling awesome stories about it! You know how I feel about Portland!

I'm sorry! please forgive me. I still love it though.

I grew up in Santa Cruz, and they have t-shirts that say Keep Santa Cruz Weird. But even the weird, hippy, pot-smoking surfers and skaters have to wait in line for hours at the DMV.

so does that make Portland uber weird?