Well, where do I start? I had a great time reconnecting with Mo last night and catching up on the gossip and filling her in on my busy life. I really missed her. You know, there are lots of people in my life, but there is nothing like curling up on the couch with another girl and just letting the conversation take you where it will. Sometimes it really surprises me, how moments like that pull honesty out of the depths.
She is in a relationship with a super terrific guy. I really hope these two go the distance because they are both 20 kinds of special and I love to see them happy, even when I'm throwing up in my mouth a little bit at their gushy antics. I mean really.

But, naturally, the topic of love always turns back to perpetually love-disabled me. I know my friends want love for me. I know. But you can't always change the hand you were dealt. Seriously, reality and therapy and self-analyzing aside, I have a true disability in the love department. I am physically incapable of attracting the right kind of person necessary to have a healthy relationship. Or maybe that's not even fair. Maybe I am actually physically incapable of having a healthy relationship. Maybe. Lord knows I don't like to share my shit. I think I missed that lesson in preschool where you learn to share. I always thought, dude, I'd share more if they didn't always mess up my shit. I like my things, and in adulthood, my space, like I like it. Sorry, dudes. I never said I'm not neurotic. I think I even tattooed that on my forehead. But, you know what, let's be honest for a second. None of my relationships have ever truly ended because of my neuroses. Well, at least I don't think so. Maybe when I was hearing, "I cheated," or "I think babies are fungus," what they were really saying was that they couldn't live with fluffy pillows and a symmetrical room. Damn. I should have known.

Okay, seriously though, I know a good chunk of the problem is who I'm picking. It's not their faults I'm picking them and expecting them to be relationship material. If they want to be douches, that's their right. Who am I to thwart their destinies? Now, in my defense, I never did try to change anyone. I think that's a road best left deserted. Instead, I just refused to see these guys for what they were: wrong for me. And sometimes said blindness wasn't completely my fault; sometimes they put on a good act. And I don't blame them. I'm hot. I'd lie to get a piece of this too. But the fact remains that if I expect to ever have the kind of relationship I want, the healthy kind, where people treat each other nicely and don't sleep with other people and want nice things like pretty houses and babies, then I have to fix my picker.

In that effort, I have worked up a dream guy. Now, I realize this is an exercise meant for a pre-teen with Tiger Beat posters on her wall and Clearasil on her dresser, but tough titties. I did all that when I was 13, sure, but my dream guy back then was a cross between Christian Slater (a la Heathers), Johnny Depp (a la 21 Jump Street) and Batman. What can I say? My type was a bit, well, my subsequent love life for the next 15 years makes perfect sense, doesn't it. SO, I'm starting over.

For the sake of the dream guy scenario, I'll allow myself specifics, but I'm really not as picky as I sound. I typically like to say that I don't have a type, that I'm attracted to all sorts, but hell, that's not worked so well thus far. These specifics serve as a trope for the real, human guy I'd like to meet. Plus, it's more fun for the game. So let's press on. Dream Guy. Dream Guy is smart, damn smart. The smart really doesn't need to be in a certain area, but he has to like to read (and not just magazines either. those don't count.). Well educated is a definite must. But also must have some street smarts, like to travel, thinks well on his feet, that kind of thing.
I really don't care about his job, except to say that gainful employment is always attractive. But, for the game, I'll give Dream Guy a job that serves as a metaphor for the kind of guy I think he is. He's maybe a civil rights attorney or something like that, mostly he has to care about the state of the world and want to do something about it. He would have to be liberal of course. He needs to appreciate creativity. If he's not inclined to art or music or the arts, he must appreciate them or at least understand how I can spend a day wandering through installation art. Dream Guy doesn't cheat and while he wouldn't push me to move too quickly, he would ultimately be overcome with my awesomeness and couldn't bear the thought of being with anyone else (Dream Guy might be a tad dramatic). He not only doesn't think that babies/children aren't some kind of fungus, but he actually likes them, would like to make/buy some at some point.

I don't want to lock Dream Guy into a physical appearance, but for the sake of the fantasy, let's picture this guy (for the record, if you've never watched Chuck, you should): 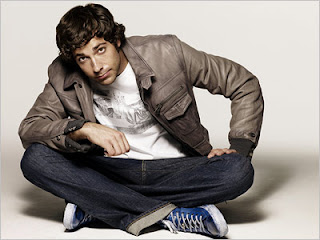 Get the picture? Equal parts nerd and rock, slightly rumply but dresses up nicely. Oh and for the sake of the fantasy, let's say that Dream Guy isn't younger than me and is no more than 10 years older than me. And naturally, he'd have to be funny, like rolling on the floor, snorting, soda coming out of my noise laughing funny. Naturally. I mean, I'm fucking highlarious, so he'd have to keep up of course. Of course.
I'm out of ideas. What else? What am I missing for Dream Guy? Lay it on me!

You left out the most important part of Dream Guy...he loves you just as you are, idiosyncrasies et all!

I feel for you, I do. I've been there...twice. First as young, energetic girl tackling the glorious big world in my 20's and then again as half beaten down divorcee looking at life with new eyes. My dating life was every kind of roller coaster you can think of and have all the journals to prove it!

Hang in there, love is like life, it happens when your busy making other plans. =)

How could I have forgotten that! MOST important part. fo sho.