What's the name of that movie? My dad the hero? Or my father the hero? Well, that's just kinda how I really feel about my dad. Today is my dad's 63rd birthday. Which means I'll be razzing him endlessly about being OLD. 63 is not that old. It's not old at all. But that's the shtick between me and my pops. And I've had him wrapped around my pinky since I could talk. To this day, all I have to do is tilt my head and make bambi eyes and coo "Daaaaad," and he'll say, "What do you want?" and acquiesce to my ever whim. Works every time. Works on traffic cops too. Not that I know. I've been told.

Well, when I was little, I was a shameless daddy's girl. When my mom was being crazy or whatever it was she did, I would grab any opportunity to pal around with my dad, whether it was running errands, watching his company basketball practice, playing soccer in the dirt in front of our house, hanging out at his job, coloring or reading under his feet at his choir practice or Red Cross board meeting, playing with the Resusci-Annie (the little baby dummy was my favorite) while he taught a First Aid/CPR class, or just riding around town.

Sunday mornings were spent with doughnuts (I always pissed him off because I would lick the chocolate off and give him back the doughnut) and the newspaper. He would turn first to the comics, which we'd lay out in front of us on the floor as I sat in his lap, and he'd read each panel until I was old enough to read to him. As I got older, after the comics (which were essential), we'd go through the paper searching for typos and errors. Dad was training a little editor.

I was proud of my dad. In second grade, we had alphabet show and tell all year. I brought him for D for Dad, F for Fireman, and S for Scientist. He visited many, many of my science classes with his lab coat and glasses and unkempt hair (the hair wasn't part of the costume; he just hasn't combed his hair since 1969) and dazzled my classmates with chemistry tricks and bad jokes. He brought the fire engine to school and let the kids climb all over it (I was always popular on those days).

Did I mention my dad is a jokester? No, that's not accurate. My dad is a punster. If there is a pun to be found, he will find it. Even my dad isn't around, I'll still often find myself thinking of what lame joke he would make in any given situation. It's pathetic really.

Have I mentioned yet that my dad is also this phenomenal actor? He is. And he can sing too. He's only ever done community theater and, truth be told, I think he's okay with that. But had he pursued it, my dad could have been a successful stage actor. Indeed. I don't know when he started, but his reputation at the local college theater and in my town was well established before I came along. As a result, I grew up in the theater and, my crazy stage mom aside, some of my best memories are playing in green rooms and getting to watch my dad perform from the catwalk or control room. When I was in plays with him, even though I didn't really want to be on stage, I loved going to rehearsals with my dad every night. I always memorized all of his lines (He didn't ask me to; I just did while listening to him.) and run lines with him in his spare time.

Not only was my dad a chemist (he works in a lab at a cement plant and quarry), he is also a retired fire captain. I always called him Smokey the Bear, because if there was smoke in the air, my dad would jump in the car and smell the fire out. Most people are fascinated with fire, but by my preteen years, I just found it an annoying thing my dad made me watch. Really, Dad? Another fire? Can't we go home? Saved by the Bell is on! Fireman couldn't compete with Mark-Paul Gosselaar.

By my teens, my dad was just an embarrassing old man who looked like Grandpa Joe from Willie Wonka and the Chocolate Factory

(he still does) and who scared my friends. His shtick was acting like a grump. Ask my dad who his heroes are and he'll say Scrooge and the Grinch. Yup, that's my dad. It's all a joke to him though. My friends used to call the house (days before cell phones) and he'd answer, "WHADDAYAWANT?" all gruff and then laugh when they'd hang up. Despite that, my friends always loved my dad. He's really just a giant kid with a mustache and unruly grey hair, so he fits right in. 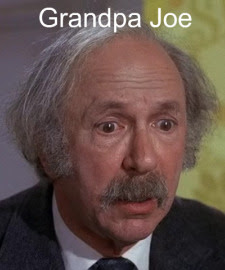 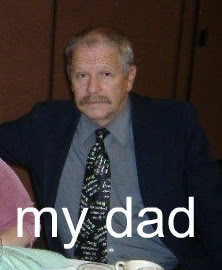 See?
But my dad's not exactly perfect. Who is? He has a short temper, so my learning to drive years were hell. We joke about it now, but those sessions always turned into shouting from him and tears from me followed by a vow to never drive again. He is also this math genius, doing all sorts of magical mathy spells in his head that I couldn't even begin to comprehend, but he is a shite teacher. Math tutoring sessions always began with "Why don't you get this, it's easy," and ended with me in tears and shouting that I was sorry he got such a stupid daughter. He didn't think I was stupid, but he honestly didn't understand why anyone wouldn't find it easy.

He hates to travel. Hates being in a place where he doesn't know where anything is. The minute I learned to drive, I took over driving in new places because my dad would get so stressed out. Even just to Disneyland. Hell, I have lived in my current town for 5 1/2 years and my dad still doesn't know where anything is because he refuses to drive here.

My dad and I have gotten very close in my adult years. I'm his escape and happy to be so. We have our rituals. When he visits, we go to his favorite crappy chain restaurants and I'm okay with that because he pays. We have a standing date every weeknight at 7pm: if both of us are at our respective homes, we play Jeopardy over the phone. I always kick his ass (but only because his memory is slower now). Friends even know to not call me between the hours of 7 and 7:30 because it's Jeopardy time.

Men have come and gone in my life. My mom is a disaster. But the person who has always been there for me, always supported me even when he disapproved, always teased me mercilessly is my dad. 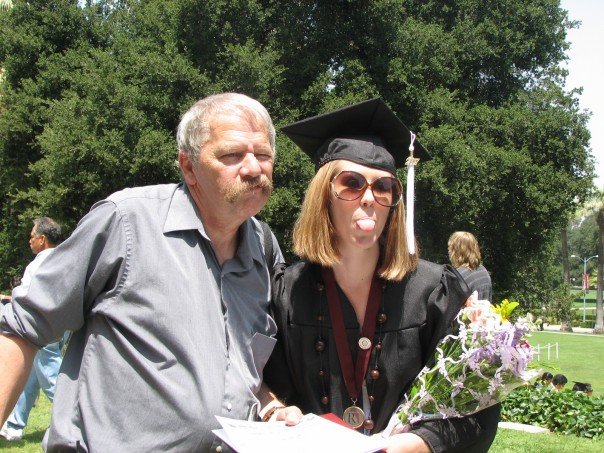 This is a totally touching post. I love your daddy. Tell him Happy Birthday from me and my own mathy guy. HEART.

That was a really sweet post. I love your Dad. Happy Birthday, Uncle John. :-)

Love! Love! Love! lol, i always loved your dad's unruly hair! "grandpa joe", that's funny! and he is an awesome actor and singer, i truly enjoyed being in Oklahoma with him! Give him a big hug from me!
Shelley

Thanks, Linds & Shel! I'll see my dad today so I'll pass on the wishes and hugs. :D

lol! I love your pop so much! I was thinking about the jokes he tells and how half of them I'd never get until like three days later! And before I got to the phone part I was thinking of how he would do that, but I'd just say hi dad! Your dad really does rock lobster! Tell him we all said hi! Happy b-day old guy!

haha! I'll try to keep the cuteness to a minimum from here on out. :D