I hope your New Years parties were fantastic, Internet, and that 2010 has been good to you thus far. I had a good New Year's Eve myself. I got all dressed up, tried to sit around with a pound of makeup on and a sparkly top, got quickly annoyed, washed the makeup off and put on a sweatshirt. 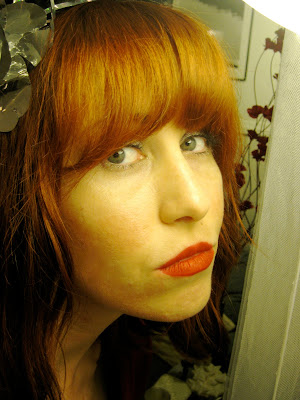 before I got un-cute
And I must say that I had a great time. A couple of friends came over to my house and we played games, watched the ball drop, and toasted in the new year with cheap champagne. Which is actually sparkling wine, because if it's not made in Champagne, France, you can't call it champagne. And I was glad I'd put on that sweatshirt. Much more cozy.
Crap. Does that mean I'm really getting old? I'd rather be comfy with a couple of friends rather than get sparkly and squeeze myself into something impossibly tight (which, let's face it, is unpleasant for everyone) and get drunk on the town. Hrm. I'm going to just say that I finally have my priorities straight. Yup. That's what happens when 30 starts knocking ever so faintly. You realize a couple of things.
What are those things, you ask? Well, Internet, the way I see it, you fall into one of three camps. You're either under 25 or over 30. If it's the former, you have to wait and find out for yourself. If it's the latter, you already know so stop asking. And as for the third camp? You're like me. You're past 25 (thank god) and not quite 30. But you're in the midst of all this discovery and shit anyway so you don't need me to tell you.
So there.
January 1st, 2010 was fairly good for me. I slept in impossibly late, watched the Rose Bowl (sorry, Ducks!), indulged in some Harry Potter and Heroes, and got a call from Morgan stranded at Union Station in LA. She and her squeeze went to the Rose Bowl via the Metrolink and despite all their research into train schedules, were stranded with no trains and one sketchass bus. So. So, I, without another thought, drove out to get them. They were so very grateful, but dude, what else was I going to do? Say, mmm sorry, I don't feel like it? No. That's not what good friends do. Good friends put on decent clothing (aka not pajamas) and drive their asses to where ever their friends were stranded. That's just how it works.
And if you're shaking your head at the screen right now thinking you wouldn't do that, that it's a lot to ask to drive so far to a downtown train station with the winos and hookers, well then you're a bad friend. 'Nuf said.
Oh and pee to the ess, do you know that today is a palindrome? 01022010! Dudes, how cool is that? Okay, yes, I am a dork. I realize. Moving on.
In less than a day, I'll be on a plane to Oregon to see my best friend and I couldn't be more excited. Watch out, rainy green state! This girl is coming! Poor Oregon won't know what hit it. Seriously though, SO EXCITED!
So I make no promises about posting for about a week or so. I know you'll live, Internet, if you try. Don't cry. Don't. You'll be okay. Be strong. Just know I'll always be in your heart. Or whatever.
Email ThisBlogThis!Share to TwitterShare to FacebookShare to Pinterest

i saw this post and just had to comment bc you look totally gorgeous. love the whole shebang.

also? i totally get the whole "under 25 or over 30" thing and the strange place that exists in between. i've been there for what seems like ages but there is no doubt at this point that 30's knock has begun to significantly increase in volume. it's kind of exhilarating actually.

oh my goodness thank you! I saw your comment and didn't even remember this post. now that I'm 30, I have to say, I love it. best age yet!