Mean Girls and other tales

Well, Internet, it seems I'm never meant to have an easy time of it. That sounds incredibly defeatist and incredibly selfish and I hate to play the martyr but it's been a struggle. This had been an especially hard week in regards to my living situation.

I keep trying to gain perspective, to remind myself that plenty of people live in worse situations, live in hiding, live in war zones, live on the streets. Plenty of people have it worse off but I've reached the point that that doesn't really help me feel better.

One day my roommate just decided she hated me and so I just stayed out of her way and kept to myself, my tactic being: don't engage. But that didn't work for her. So I have been feeling pretty trapped. She won't leave me alone, she won't let me leave, and so I've pretty much reached my limits of tolerance. Sans any physical threat, I feel bullied. I haven't felt this picked on since I was 12 years old, I swear.

But, as my bully in the 7th grade will probably tell you, I do have the capacity for abuse and bullying, BUT, I have a limit that I can take and then I just snap. You know how, in A Christmas Story, Ralphie finally snaps and beats up his bully? 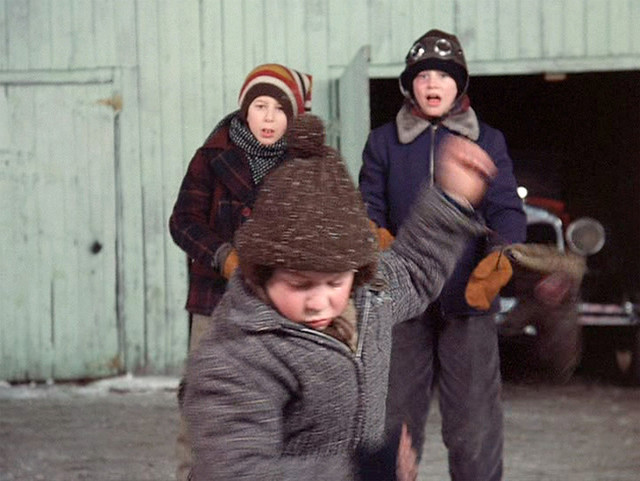 That's how I felt in the 7th grade when Dionne told the whole school I stuffed my bra and they all called me Charmin and then I kicked her ass. And that's how I feel right now. Only I probably won't beat her up unless she hits me first.

I was pretty much at my last straw this week anyway. Then I came home to a note last night announcing she'd canceled our internet service and she'd taken the modem and was signing up for her own internet and I'd be on my own.

THAT pissed me off. She knows how much I rely on the internet. I watch my TV shows online. I write my blog. I can do social media from my phone but without wifi, I use too much data that way to afford it.She knew, however much she protests this, that she was screwing me over. That I'd come home on a Friday, ready for a weekend, to no internet and be fucked.

THEN! Then I took a deep breath and tried to just sign up for my own service. But because of a ton of red tape and shit that I won't even get into, I can't get signed up for internet, not at least for a couple weeks. I'm fucked. I tried to do hotspot on my phone but can't. I looked into a hotspot service but it's insanely expensive. So I'm fucked. Completely fucked.

And that was my last limit.  But I am done with being a doormat. Done. She can kiss my motherfucking non-white-girl-ass. If she thought that would motivate me to not be a bad roommate, she's delusional because I have no concern for her whatsoever anymore. I'm not going top be spiteful or plan revenge (though I have a few ideas lemmetellya) but I'm just not going to go out of my way to be the quiet, conscientious roommate I am. She has no idea how good she had it before.

And I have a few cards in my back pocket that I haven't played yet. Hopefully I'll have good news for y'all soon.

In case you're wondering, I'm writing this from a coffee shop. Which is okay for the short term, and I hope they don't catch me downloading tv shows. Evil laugh.

And maybe this is motivation to go to the gym more and not go home at least. Look at me, still trying to find a bright side.

In other news: I have a date tonight with that guy from last weekend. Send good vibes our way that he's as awesome as I suspect. I'm very hopeful about this one. If I find my way to a coffee shop tomorrow, I'll give you all an update.
Email ThisBlogThis!Share to TwitterShare to FacebookShare to Pinterest

Sounds like it could get ugly really fast. I work at the Sheriff's office and get calls from people in these situations all the time. Unfortunately, being a pain is not illegal and once someone has established residency someplace, they cannot be removed involuntarily without an eviction notice.

Good luck with the whole thing. Don't kill each other.

Ugh sounds like a right messed up situation. What is wrong with some people?? Why is it so hard to be decent and just act with a little consideration... you roommate seems to have lost the plot. Hope you find a solution. Don't let it get too ugly... it is not worth it.
Hope it works out and that you get your internet soon again!

Mean girls are all sorts of fun and much worse than mean boys.

Oi Andy you have it bad... keep a positive outlook. How much longer do you have in the lease? Saddly I have seen many police reports about petty shit that your roommate thinks she's trying to cause.... just remember... she threatens you in any kind of way slap a restraining order on her and take her to judge judy lol! Hang in there.... as for internet are you capable of using your phone as your modem? Also they have the no contract air cards that are like $50 a month for unlimited use... thats what i use besides my phone... =)

Why do people have to suck so bad? Hot damn. I have been giving serious thought to moving to New York City, and one of my only reservations is that I love living alone and am scared shitless I'd wind up with a roommate(s) from hell.

The only roommate I've ever liked is my husband.

IDK why, but my situations always ended seriously close to yours.

I say let the games begin! Get her.

uh oh. you gotta let us know how the roommate trauma plays out...
and i say revenge is a mighty fine thing... once you've moved out of there!