It began, as it almost always does, innocently enough.

I’d moved to a house with a space to garden and a bed of bedraggled rose bushes which I was exuberant to nurture to their potential splendor.

I purchased a long, green hose with attachable nozzle, which came with a plethora of speeds and pressures, for ease of watering my grass and plants and rose bushes, nothing more.

Little did I know this innocuous apparatus would serve as a weapon that I would use to defend my space and my life in a battle with a most gruesome end.

The first time I saw her, I nearly fell over in fright, giving a small scream and dropping my garden shears.

She stared at me malevolently and her fat, black body sat completely still as if in defiance of her trespass.

But this was my home and her kind was not welcome here. I grabbed the hose, switched the nozzle to “jet” and sprayed her right in her evil little face. She immediately scuttled away and hid.

It had done its job. For the time being.

She appeared again several more times over the next couple of weeks, always creeping up on me while I was gardening all alone, unsuspecting. She’d get too close for comfort and I’d  hit her with a blast of water until she lost her creepy little grip and fell down in the dirt. I was never quite sure if I’d killed her or not. But I suppose not, since she kept coming back. Like a damn zombie.

Then came the fateful day. I got home from work and changed into jeans and walked out into my garden. I peeked into a hanging plant, looking for my newest friend, a baby Praying Mantis (I think he was a baby), a tiny bright green little guy that would greet me every day and make me smile. I named him Ernie.

But what did I find? A tiny green Praying Mantis corpse.

I knew instantly it was her. She had murdered Ernie. In cold blood.

That bitch. She was going to pay.

I got a broom and with the long, wooden handle, bashed at the bushes until she came out, all pissy, fangs dripping with venom, her red belly taunting me.

I was scared, I admit. But this time it was personal.

I sprayed her dead on with the fullest blast of water my spigot would allow, but that bitch held on with all eight legs and the will power of a demon.

I gave up on the hose. It was simply not powerful enough for her. I grabbed the broom handle and took aim. The timing had to be perfect and I couldn’t miss. I had just one shot.

I took it. I smashed the wood handle into that Black Widow spider. She wasn’t going to die easily, but I wasn’t going to let her crawl up the handle and seek her revenge upon me. I squished and squished and then I sprayed again, making sure she was truly and completely dead.

At last, it was finished. I was soaking wet and exhausted.

I wiped my brow, tossed the hose onto the grass, placed the broom back in the house, and released a long sigh of relief.

This was a post for the RemembeRED prompt: This week, we're giving you a photo to take you back in time. In 700 or fewer words, show us where your memory takes you. 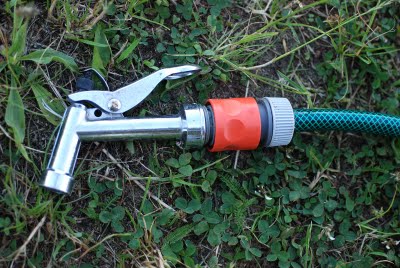 Remember that this image is merely inspiration. Your piece needn't have a hose in your piece, but we need to easily see how you were inspired by it.
Email ThisBlogThis!Share to TwitterShare to FacebookShare to Pinterest

35 comments mean you love me:

Shudder!!! Really, really do not like spiders! That description was very vivid and gave me goosebumbs.

Oh you did such a great job with this piece. I am terrified of spiders. You gave me the heebie jeebies just reading about that Black Widow!

You are an amazing writer.

[I also hate praying mantises, and all other bugs. But eewww, spiders.]

I HATE black widows. I would have killed her the first time I saw her. Hell no would I be outside knowing that thing was there.

When I was in Australia I came across a Red Back spider, the Black Widow's deadly cousin. I gave it the widest berth I could. I so did not want to die in a foreign country because of an insect.

@Nush hee! I hate them too. glad you liked!

@meleah rebeccah hee! thank you! they scare me tooooo.

@Suniverse aaahaaaa! but praying mantises are so cute! :) thanks, love! xo

@Colleen dude. I kept trying. bitch would not die! but she died in the end. oh yes. *shudder*

That was AWESOME story telling! I love it!

Wondrous writing. I needed that today, thank you.

You are hard core! I've never seen one in real life, but I'd be scared of them. I didn't realize they killed plants either. Are they typical in your area?

@Anonymous thank you so much!

@Liz dude. they are terrifying! they don't kill plants, but they do kill bugs. I haven't seen one since I moved to Portland, but they're super common in So Cal!

@alonewithcats sad. I cried for Ernie.

Oh how I hate spiders.

well done. well told tale, very descriptive, and I could feel your irritation and building anger, and i was tense with you as you took aim with the broom handle.

scared the crap out of me with the death scene. what if she'd jumped and come running at you.

id have died. right there.

@Jenna believe me. I'd have died too! just died. hee! thanks so much!

YES! YES! YES! DIE BITCH DIE!
Ohh sorry! I hate spiders so I am so happy you killed her, especially after she ate Ernie!

For the spider I have: Ewww!

I loved your words like bedraggled, scuttled, and damn zombie.

My favorite part: "But this was my home and her kind was not welcome here." for the simplicity, tight wording and the full embrace of kick-butt-ness! :)

That's my kind of spider - sprayed and squished and sprayed again. YAY!

"I was scared, I admit. But this time it was personal."

"She stared at me malevolently and her fat, black body sat completely still as if in defiance of her trespass."

Only thing better than a dead spider is an even deader one! Spray, squish REPEAT!

Love it. So glad you got ridden of that mean spider. ;)

This was great! I laughed a few times, especially when you accused the spider of killing the praying mantis in cold blood.
This was a great post!

Ewww! as I laugh hysterically. Love this! I've had a few creepy garden creatures myself but unlike you, I run in the other direction. Love your description of the fight between you and the spider, and the image of her "all pissy, fangs dripping with venom, red belly taunting..."

Ooooh. I hate spiders too. And we have tons of them in the fall. Smashing them is always a last resort for me too.

Loved the storyline about Ernie the praying mantis. Too bad the big black widow got him.

The mad woman behind the blog said...

I'm clearly lame as it took half the post to realize you were writing about a spider. And I was grateful for my ignorance.

At Girl Scout camp we used to have wolf spiders the size of our fists. And yeah, it was my job to shoo them away. So glad I didn't have to kill them.

You, your bad ass self, you are my hero.

Wow, black widow spiders aren't usually so aggressive. Your description of your battle was hilarious.

Wow. That was beyond a side of awesome. It was a full COURSE of awesome!

LOVED how you worked this.

I was shuddering and rooting for you. And poor Ernie! Such a sad loss.

thanks for all the comments, everyone! I read each one. I appreciate it so much!!! xoxo

that was harrowing , the only way that could be worse is if it was a snake...EWWWW.
The descriptions were so spot on, I was standing with you..and screaming. ;)

@TheKirCorner if that was a snake, I would have had a heart attack!!!