My First Halloween (in Portland)

Another year. Another Halloween.  And now it's over. *sigh*

This was a pretty good one, all things considered.

Earlier in the day, the roomies and I went to Farmers Market. Lots of people and kids in costumes: 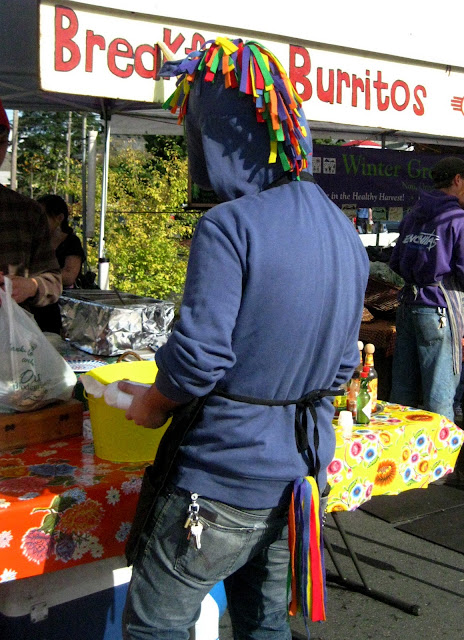 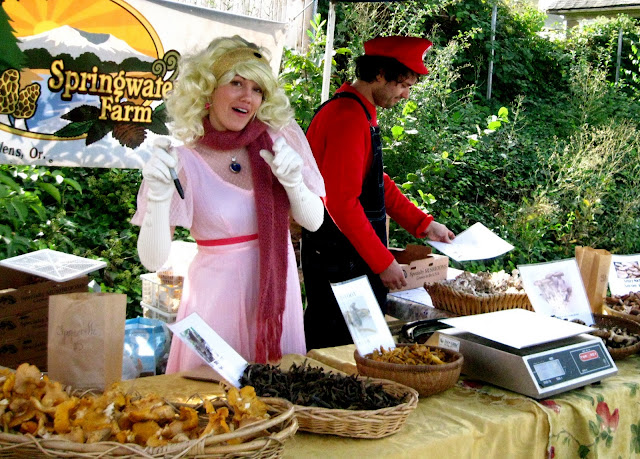 Mario and the Princess. And get this: they were selling mushrooms! 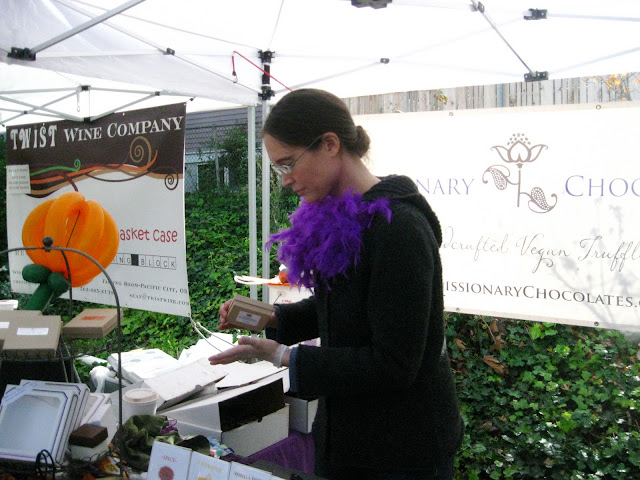 The lovely Melissa of Missionary Chocolates 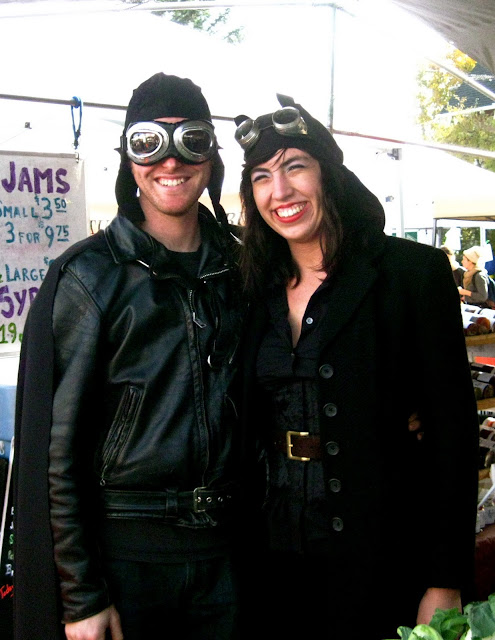 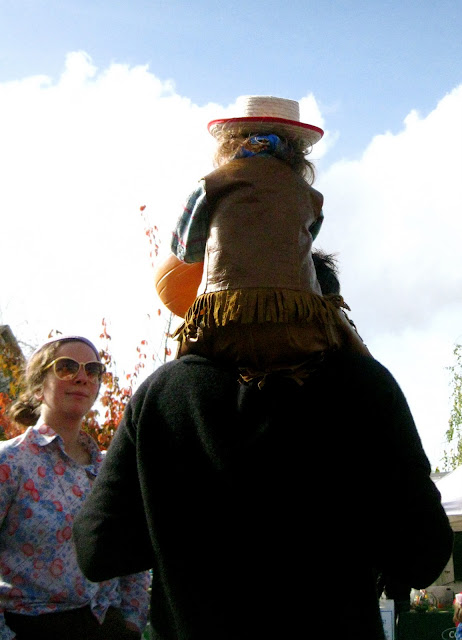 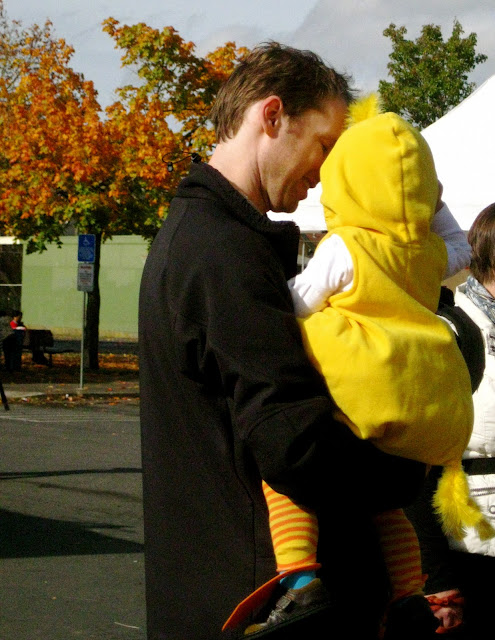 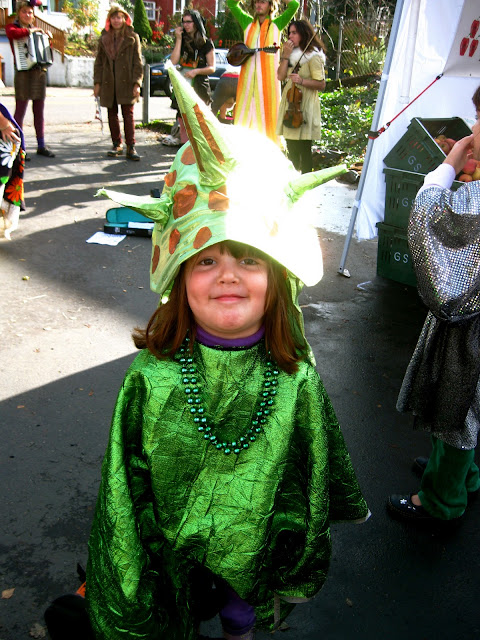 She's a Stegosaurus. And totally stoked about Halloween. Rosie the Riveter! (maybe my fave costume of the day)
The we went out salsa dancing at night.
Here are my awesome Steampunk roommates: 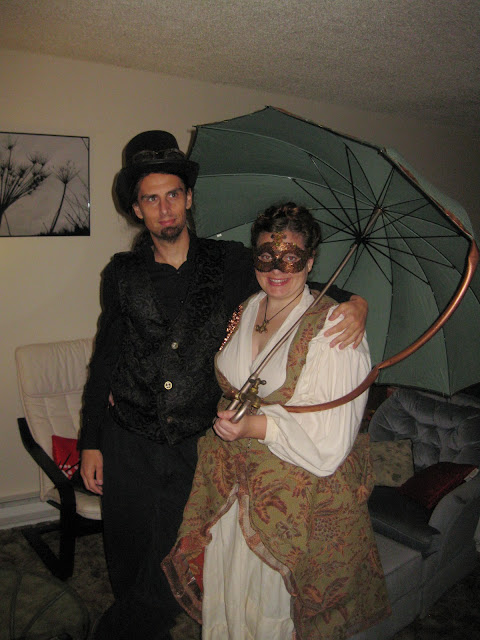 Here's the shot you've all been waiting for, my costume: 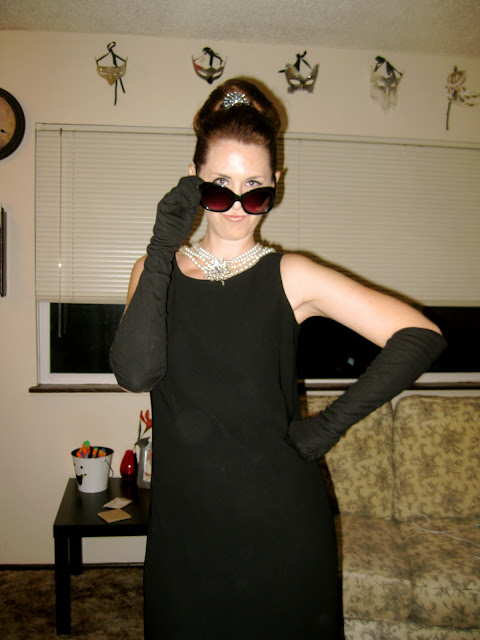 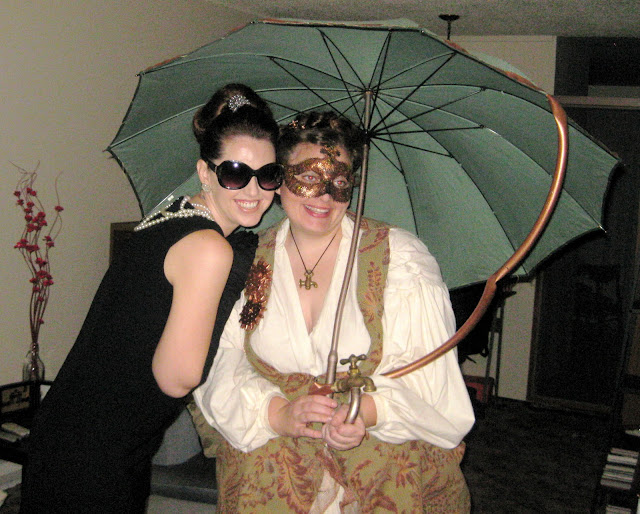 Besties
The hair was a challenge and I had more hairspray in there than could destroy the entire ozone layer.
Several people got my costume right off, mostly girls, but a couple guys too. At least 3 people thought I was Jackie O, who was gorgeous, so I'll take it. Plus, I think I may resemble Jackie more than Audrey in the face. So whatevs. Maybe I'll go as Jackie next year and wear a pillbox hat. And at least a few people guessed Mad Men

. Which is right around the same time period, so awesome.
My camera died so I didn't get many shots at the dance. But there were so cool costumes.
I danced a bit. Got molested whilst dancing with a little Latin man who offered me "private" dance lessons ifyouknowwhatImean. I politely declined.
Got "the look" from a girl who thought I was hitting on her man when he was talking to me as I was just trying to order some water at the bar. C'mon lady! I don't want your skinny ass man.
Made a couple of new friends but neglected to exchange any info. Brilliant.
And stood around looking Audrey-chic most of the night with my sunglasses (because I couldn't see shit with them on) and a martini glass (because Holly wouldn't hold a beer bottle). 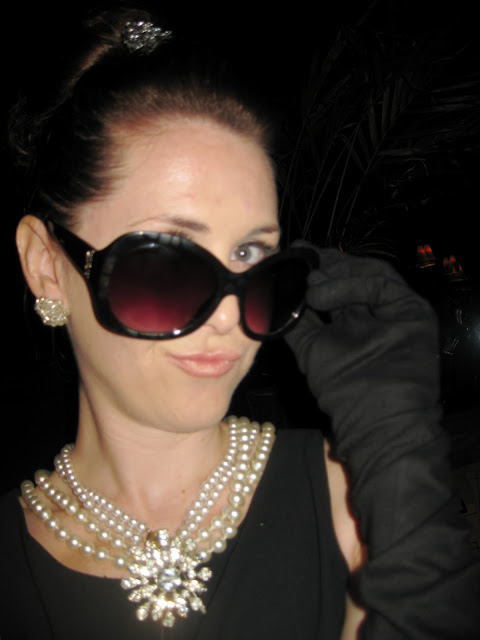 Happy First Halloween in Portland! The weather down in Eugene was pretty decent, no rain. Hopefully the same was true for you up North. One of the things I love about where we live...sometimes you can't tell if it is a costume or just their everyday outfit :)

thanks! yeah, the weather was beautiful here. perfect actually. I know! there were so many people that I was like, hrm, I don't think that's a costume. hah!

I nearly died laughing at the Mario Mushroom picture! I wonder how many people made the connection. That little girl dinosaur is totally awesome and I applaud her creativity. And your costume rocked! Where did you get that necklace? It is so pretty! Glad you had fun!

Colleen, I must compliment myself because nobody around me got the mushroom connection. I pointed it out and then basked in my brilliance. hah! snort.

I pieced the necklace together. it's two strands of pearls doubled and connected with a brooch. :D

As for the Latin dude, what we call "molesting" they call "saying hello in a relaxed manner...".

You look fabulous! And I have to admit, since I'm a Mad Men fan, that probably would have been my first thought, even though you are perfectly Breakfast at Tiffany's.

I LOVE Mario and the Princess selling mushrooms! HAHAHA!

Girl, you are GORGEOUS!!! BEYOND BEAUTIFUL!!
I love your Halloween. It looks fabulous!

Brahm- uhuh. saying hello to my ass, you mean. and thanks!

Liz- thanks, darlin! if I were bustier, I'd totally go as Joan. she's my fave.

Im fuckin jealous. Well, just a little bit. Because my hallows eve spent on the couch piled in dogs watching good movies in the dark was not too bad. The saloon 20 minutes down the road promise kareoke and "hill people" among other strange and interesting people watching, but somehow, when you don't have any local friends to share it with, packing up and dragging ass out to a party doesn't sound as fun. We used to go tear apart Hollywood with my best friend, who is a crazy latin man queen and always goes in drag, but these days, it's just not as fun. At least the fireplace was crackling and I had plenty of tequilla.

that doesn't sound so bad! I don't really miss my days of hitting the streets of Hollywood for holidays anymore. and I'm such an old lady, I was home by 11:30 and ready for bed.

you look awesome! im so mad i didn't have the time to "do" halloween proper this year. the pictures you took totally make up for it. my favorite time of year!!!

oh man you just made me laugh! :D