So, without writing about work, which I really shouldn't do, probably even to say good things, because I really like my paycheck, I've still got to say that I've been under an unbelievable amount of pressure lately.
This is how I feel lately: 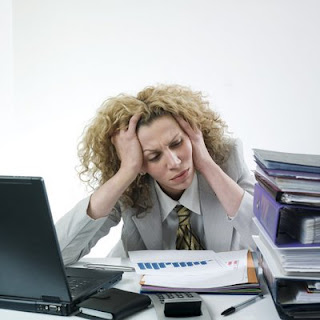 Though, for the record, my desk is way more organized than hers, even at my most stressed. And my hair is way better. But you knew that. And what the hell is she wearing? That tie? My god, someone buy this girl a mirror. No wonder she's stressed.
Anywayyyyy
I have a big event looming (no, not just big. HUGE. MONUMENTAL!) and just not enough hours in the day to get everything done, even if I take my work home, which, bee tee double you, I have been. I'm not sure that I'll see at light at the end of the tunnel until after said event, at which point I'll just collapse in such pure ecstasy at completing it and living through it. When that happens, please celebrate my survival with me and send flowers to the Community Hospital, room 211.
god I hope that is a real room and that it is occupied by a 75 year old woman named Myrtle. Please make Myrtle's day. She likes Gladiolas and lime Jello.
Naturally, this is taking a toll. I am punchy and cranky and sleepless (because I'm stressing about all I have to do) and irrational and sensitive. My synapses just aren't firing and I don't think I'm making much sense, at least I don't sound like I do. Example of a typical conversation this week:
coworker: hey, Andy, did you get blah de be blah done yet?
me: (oh my god, I fail at life and they hate me) no, but did you know that the French plan to colonize the moon in order to export moon cheese, the last untapped cheese? damn, these people are genius. do you think they'll make the moon people learn French and become their slaves? That would be so typical. Let's protest!
coworker: greaaaaat, let me know when you're done with blah de be blah.
Do you see? It's an utter mystery. Was I really talking about French Moon Cheese or was that just what my brain interpreted whilst I was actually answering in a completely sensical way. Maybe there is a point when I become so tired that my brain takes over my body and I become this automaton genius which can churn out incredible amounts of work without ME ever actually thinking a coherent thought. It's fantastic! I really am a genius! Except, I also feel migrainey and dizzy and nauseated, so maybe the side effects aren't worth it after all. Fine print: not for women over 50 or under 45, not for women who are pregnant, may become pregnant, ever have been pregnant, ever want to get pregnant, or who came out of someone's pregnant belly at some point in time, or even come into contact with the concept of pregnant. But, Automoton Genius is not for everyone. Please consult your doctor to see if Automaton Genius is right for you. And don't smoke.
See? Punchy.
The point of all this was that I got to go home half a day today to make up for working last weekend and I am laying in my bed trying to nap, but am way to0 dizzy and stressy to sleep. And while I would loooove to drag my ass to the car and drive to the rite aid and buy some tylenol pm, I don't want to. So I won't. Because really, I hate those pills anyway. I have always struggled with sleep, well, not ALways, but off and on for years. And I would rather wait it out before I pop some chemical concoction that will eventually turn me into a whacked-out, drugged, crazy lady with too many pets, a pile of newspapers everywhere, an addiction to shopping off TV, and a world view that includes me at the center and all the planets and their inhabitants rotating around me. Really, I just don't want to be my mom. And no, I'm not exaggerating. I was actually leaving a lot out to be nice.
Suffice to say, I am trepidatious about medication. Plus it's like 3 pm and I don't want to sleep 8 hours and wake up at 11 tonight ready to boogie. That's just inconvenient, really.
Did I mention that I'm punchy? You all will think this is hilarious when I'm roommates with Myrtle and her Gladiolas that you sent her. Who's laughing now huh? Not Myrtle, that's not who.
Email ThisBlogThis!Share to TwitterShare to FacebookShare to Pinterest

hey lady! If you ever need to decompress give me a call. We can chat it out without you losing your job! Good luck :)!

This comment has been removed by a blog administrator.
September 21, 2009