I was reading one of my favorite blogs just now, written by one of the funniest women on the planet, Heather Armstrong of dooce.com, and in this particular post, Heather describes how her mother has the shortest phone conversations ever. And anyone who knows my mother at all will at this point be smacking their heads and going, what a lucky lady!
This is because while Heather's mom may not be able to stay on the phone for over a minute, my mom holds the record for being the complete antithesis of that. Now, I must say at this point that I do not get along with my mom, haven't spoken to her in a long time, but that's not the point. So let's set all that aside.
My mom loves the phone. Lives for it. Call her at your own peril. I recommend that anyone calling her just start the conversation with "goodbye" or "gotta go." That will buy you an hour or so. Don't even attempt, "I can't talk long." She won't even hear it. She'll just keep barreling through so keep those goodbyes going as long as you can. And if all else fails, she doesn't really understand cell phones. Just pull the, "I can't hear you....are you there?...can you hear me?....if you can hear me, I'm hanging up now..." and just hang up. Thank god for cell phones. I don't know what people did before them. How did they ever end conversations with my mom?
She's also a salesman's dream come true. She's gullible and will buy whatever you're selling. So if you can imagine her two favorite mediums, shopping and the phone, coming together in a vortex with my mom at the middle, well, that's a phone bill I don't want to see. Salesmen (and women) beware. She'll buy your product alright, but at what cost? You may sell twenty subscriptions to Angler or 15 dog hair trimmers, but you'll lose twelve hours of your life. Twelve hours you can never get back!
Don't get me started on QVC. Before my dad cut up her debit card, I'm pretty sure the entire call center there knew her middle name. And my dad's. And mine for that matter. Because what else do you think she talks about.
Okay, okay, I'll stop making fun of mi madre. But, this is the easy stuff. The stuff you're supposed to make fun of. This is the stuff that sitcoms are made of.
To be fair, here's some quirky stuff about my dad. My dad has been a closet smoker his whole life. I think the only time he smoked openly was in Vietnam. I actually think he thinks no one knows he smokes. Hey, dad! We know. We know. He also looks like a mad scientist. Seriously. He's had this Albert Einstein thing going on since 1980 and I don't think he's combed his hair since 1973.
This works because he actually is a scientist. He works in a chemist lab and I hear that the younger techs like to give him that photo of Einstein sticking his tongue out. Perfect likeness. Oh I know. Did you ever see Willie Wonka? The first one? My dad looks like Grandpa Joe. Hold on, yes! Here's a picture . Do you see? That's my pops. Ooh also, my dad used to be a fire captain and the younger guys used to call him Many Moons. Love that. But he's got a great sense of humor.
I found this website this weekend whilst holed up in my house sick and I think I want to submit a pic of my 'rents. I have a bunch, but this one is a big contender: 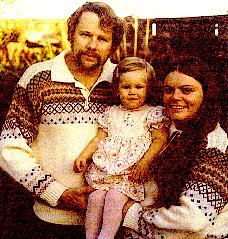 That's me in the middle. I'm guessing this is early 1981 and you've caught my dad in a rare hair combed moment. This is also about one year before he started losing that mane of hair. Poor guy. Do you love their matching shirts? You know my mom made him do that. They have tons of pictures with matching shirts. I swear.
Today, halfway through the day, I realized it's my adoption day. It's the 29th anniversary of my adoption and we always celebrated with dinner and a small present. This year I forgot about it, but my dad did make me lunch on Saturday and bought me a much needed appliance for my tiny kitchen. I say success! But every year I've been less and less excited about this day. And that's complicated. Part of it the lack of relationship with my mom but part of it is that I just keep forgetting. And as I've gotten older, celebrating was put on the back burner. Some years I had to work, one year I was in France, etc. It's become not such a big deal.
Part of why we celebrated when I was a kid was that I shared my birthday with my mom. So instead of my birthday, this was my special day. And instead of a huge party (which my mom loved to throw for our birthdays and invite all of China), I just wanted a special dinner with one close friend. That's kind of how I still roll. But since then, I've made a bigger deal out of my birthday. I get a special day and don't really feel the need to do that twice.
Plus maybe that just shows how comfortable I am. So what if I forgot? I'd rather have quality time with friends on random days for no better reason than the pleasure of each other's company.
Well anyway, happy 29th adoption day to me. I may have been alive longer, but I've been an Andrea since November 17th, 1980. I was a Rachel before that. But that's a story for another time.
Email ThisBlogThis!Share to TwitterShare to FacebookShare to Pinterest

Great story...can't wait to hear how Rachel became Andrea. But hey, at least you have two cool given names...my parents gave me an awkward mix of names that confuses people to this day! But that's a story for another day. =)

Happy Andrea Day to you!

That's so funny about your dad's hair! It was always crazy, like it was blowing in the wind! Your dad is super cool!