it's called "Black Friday" for a reason

Ah the day after Thanksgiving. I am so stoked to have 3 more days off, I...I...well, I don't know what I could do, but you can bet it's exciting! Damn skippy.
Yesterday was nice. It was great to see my cousin and hey boyfriend John and my aunts.And my sweet potatoes turned out great. My pumpkin mousse pie was pretty delish, but I think I can improve on it. I'm thinking it would be better not frozen, with more of a puddingy texture. And less crust. I may just do a super thin graham cracker crust on the bottom and a dusting of crumbs on the top. YUM! Ooooh, maybe I'll make it for New Years (More on my New Years plans as we get closer to)! I also took some more Holgas which I'm taking in to develop sometime this weekend. We'll see how they turn out. Here's a digital of my fam: 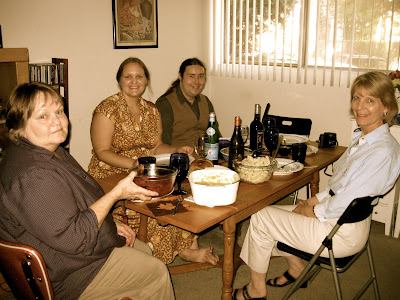 Poor John, though. I always feel a little bad for him, being the only guy with all these women around. He holds his own though, maybe even likes the attention a little. He was in classic Thanksgiving eating form, even changed his shirt and pants in order to go in for lots of dessert. But the poor guy had to leave in the evening for work, which meant that he had to put on work clothes. The following is the ensuing challenge for a very full boy:

I had a rough night last night, though, Who knows why, but I had the most bizarre dreams. So today I'm a little crankers, a little tired. Even so, I have forced myself to do a little winter decorating. I wasn't going to. I've been so apathetic about the season. It doesn't even feel like winter. But I made myself do it. And I'm glad I did. My place looks pretty damn cute.
And for all your crazy Black Friday shoppers, what is wrong with you? I worked retail for like 7 years. 7 years I can never get back. That is 7 years of my adult life that I spent battling with crazy people who have such shopping fever they resemble footage of meth attics being electrocuted. I assume. I've never seen footage like that. Now that I don't have to, I wouldn't leave the house on Black Friday if you paid me. You'd have to hold one of my family member's hostage, threaten to shoot him or her to get me to go near a store today. And even then, it would depend on which family member. This is what you're supposed to do the day after Thanksgiving: sleep your fat ass in! Wear pajamas until you decide to venture outside and you don't want to frighten the neighbors. Eat reheated leftovers, and bee tee doubleyou, pie is a perfectly acceptable breakfast. Now THAT is a proper Black Friday.
Anyway, because I'm so po (that's so poor, I can't afford the extra "o" or "r"), I'm giving artsy fartsy presents this year. Maybe a tad narcissistic, but hell, if those people I love the most don't love my art, maybe they shouldn't get presents. Hah!
Email ThisBlogThis!Share to TwitterShare to FacebookShare to Pinterest

I'm glad you had a nice, no-stress Thanksgiving, andygirl. (Well, except for the wine headache, but the yoga seemed to work -- you were smiliing.) I'm with you on your lemmings-to-the-cliff Black Friday thoughts. What a complete waste of a day off -- being an electrocuted-meth-addict consumer. I have to ask -- can I get the original photo (sans the text) in your new blog header? OMG, it is unbelievably beautiful and sexy. Now, that's the way to spend Black Friday -- or any day.