On Manifest Destiny and The Consumerization of Thanksgiving 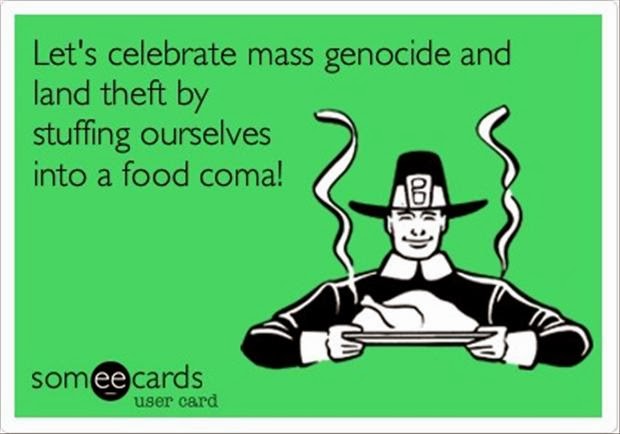 It's that time of year, when we gather all our kin and eat a ton of food and booze, and yell at each other because we really don't want to be together, and celebrate the hostile takeover of most of a continent, and then wake up the next day at the asscrack of dawn to trample all in our path just to get a great deal on a piece of shit "It" toy or a flat screen TV.

Everyone knows by now that I'm not a huge fan of Thanksgiving, which I've gleefully and recently coined, "Manifest Destiny Day," which I think sums of the whole thing quite beautifully. But before I get to Manifest Destiny and how Black Friday is a gorgeous metaphor of that long tradition of taking what we want, a little recap on my tenuous relationship with the holiday:

I've never been much a fan of Thanksgiving food. Huge hunks of turkey? Not for me. Stuffing and cranberries and green bean casserole? Yucky. I like corn and potatoes, of course. Because potatoes are glorious, said the Irish girl. And somehow macaroni and cheese always made it into the mix, probably because I hated all the other foods and mac & cheese is also glorious.

Thanksgiving was never much fun in my house. I can count the good childhood Thanksgivings I had on one hand and I remember each good time extremely clearly. I remember splatter painting a table cloth (with permission) with my cousin. I remember eating homemade whipped cream. I remember my boisterous uncle telling a story, which involved wild hand gestures and the subsequent knocking over and splashing of cranberry sauce all over his new and very white house.

But the rest were complete suckass. Usually my mom wouldn't start cooking until late in the day, because she's a world class procrastinator, something she'd find a zillion ways to blame on me or my dad or the dogs or maybe even the bird, while she also refused any help. Part way through the day, we'd all be starving and someone would pick a fight about something stupid, I'd be told I was an ungrateful little shit and go crying in my room and my dad would storm out the front door, slamming it and putting another crack in the door frame, and nobody would be happy. If we were lucky, we might be served dinner around midnight, which would undoubtedly be delicious (meaning the potatoes and corn and mac & cheese), and, while my mom was an excellent cook, I'm sure part of the deliciousness was due in part to our fasting the rest of the day's entirety.

So there's no nostalgia for Thanksgiving in me. There's no holding hands around a warm table filled with my loved ones declaring what we're thankful for. Most of my memories are of stress and tears.

And I also try to put aside that "giving thanks" means thanking the deity in the sky for whatever it is I supposedly didn't earn myself or didn't get by pure chance or serendipity or whatever. If I have things or happiness or love, I suppose I'm supposed to thank Someone with a capital S for it. So if I don't believe in said deity, can I just thank myself?

Then I worked retail. My very first real job out of high school was retail and I worked various sales and management positions for most of my twenties. Now, if there's one thing I am thankful for, it's that I never had to work at Wal Mart and come into work at 1am on Black Friday and dodge the murderous hoards all day. But I did work at malls and I did often have to leave Thanksgiving early (when I was still in contact with my madre) in order to get home at a decent hour to get enough sleep to work the next day at the asscrack of dawn and survive the utter madness that would ensue and continue for the next month. 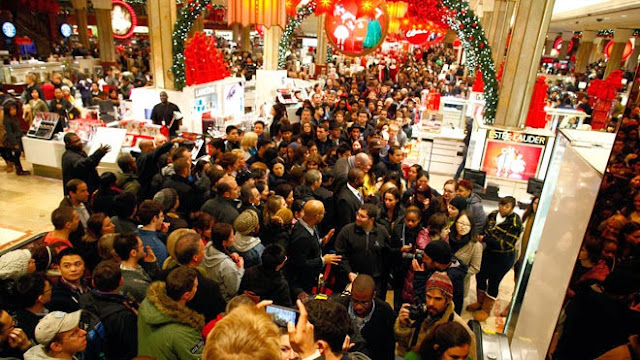 Needless to say, Thanksgiving for me has, more often than not, signaled the start of stress.

And I still get all stressy thinking about it, even though I don't work retail anymore and I have had a few wonderful (small) Thanksgivings with my little cousin and I am starting to like the holiday season a bit (the lights and the winter and maybe even a little snow). And there are people I love who love this holiday. I get that. I can suck it up and make myself be social for a day and eat my gluten free mac & cheese and drink wine and participate in this odd day.

I respect that plenty of people like this holiday. Though I'd argue that we should at least know what we're celebrating and it has nothing to do with the story we're raised on. I'll skip the retelling of the Thanksgiving story (because, long). You can read that here.

I do, however, want to talk about Manifest Destiny.

Now if that doesn't describe the entire history of the colonization of North America, I don't know what does. Sure, the term didn't come about until the 19th century, but the sentiment predated that by hundreds of years. We expanded beyond Europe. We took what we wanted and destroyed everything in our path. And we called it our duty and our destiny. And we called all men equal while millions suffered on reservations or in slavery or disenfranchisement.

I'm not saying we put aside this major tradition that so many people love; I'm saying let's learn the real story and at least acknowledge that our history is based on murder and subjugation and disenfranchisement and that an entire population of people still think of suffering on this day while we're stuffing our faces and being grateful for such abundance.

I'm just saying we have a little perspective.

So where does Black Friday and consumerism come in? Well where doesn't it? I know we're all lamenting the consumerization of this (and all, really) holiday(s), and no one hates the mentality and stress of it all more than I, but I also think it's completely natural given our history. Black Friday is SO Manifest Destiny! 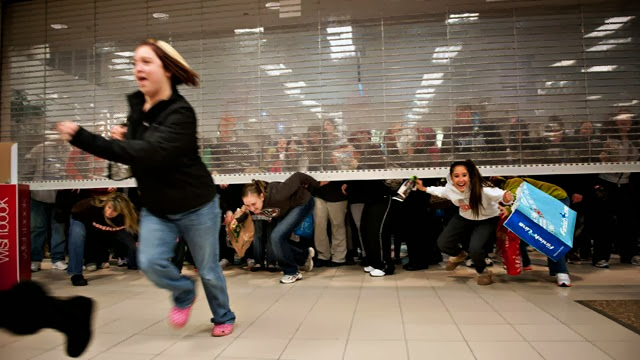 It's our real life pageant play of colonization. We're not taking over countries and continents, but we each get to be little imperialists and conquer the shopping! Claim all the things! Take all the stuff and who the fuck cares who gets in our way! We deserve it! We were good all year! Gimme gimme gimme gimme!

All we're missing are flags.

It's not a decline in our civilization so much as a fulfillment of our longest traditions. 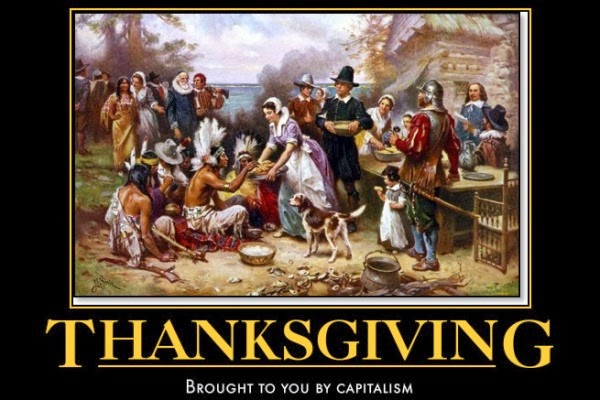 So I'm torn. I hate the shopping and sheer madness of it all. I mean, does anyone honestly think it's sane behavior? And you won't find me anywhere near a shopping center on the worst Friday of the year. But I also think that maybe this is just a teensy bit karmic. Maybe our karmic punishment for all of the crimes against humanity our civilization has enacted on land is that we'll eat ourselves alive, both literally one day and figuratively the next, until there's nothing left.

But I'll still participate in Thanksgiving.

This year, Eminem and I will be trekking down to Northern California to stay with my older cousin and her family, mostly so he can finally meet some of my family, and I'm sure we'll have a good time. For one, my mother won't be there, which is always a good thing! Two, booze! Three, I love my cousin and her family and I'm confident they aren't the train wreck my immediate family is. Four, I'm armed with GF rolls from my favroite bakery and my cousin is making me a GF mac & cheese and I'm making these Reese's bottom cheesecake cups. Five, road trip with my man! Yeah!

See, I can have fun. I just like to be conscious of why I'm having fun and know what I'm celebrating. I don't think that's unreasonable.
Email ThisBlogThis!Share to TwitterShare to FacebookShare to Pinterest

Yes! This. I actually love Thanksgiving (even though not all my family memories of it are happy ones), but I totally agree that we need to remember the real history behind the holiday. I'm facing the difficult task this week of teaching elementary school kids in Martinique about Thanksgiving in only 30 or 45 minutes. I am using a really simplified version of the true story.