Swimsuits are the Debil 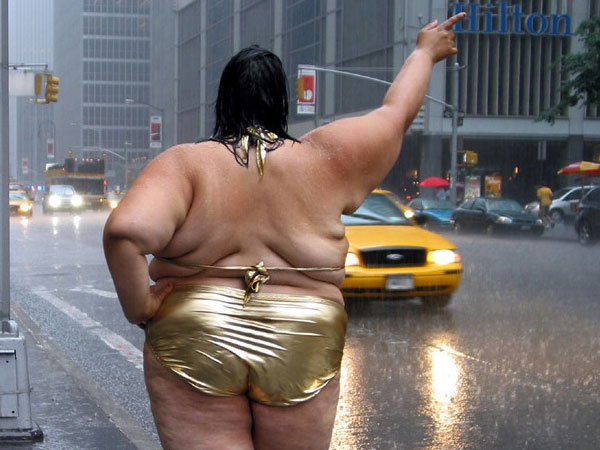 I guarantee that, unless you're Giselle, no woman likes swimsuit shopping. I say Giselle, because I've met her. I've sold her bras and fastened those bras and rang up her $3500 transaction and it was the easiest damn process I've ever witnessed in my whole damn life. I doubt swimsuit shopping is hard for her.

Anywayyyy, if you're one of the millions of other women on the planet, I can pretty much guarantee you hate swimsuit shopping. It sucks. It just totally sucks.

Even when I was a much tinier little thing (minus the childhood years) and someone who called herself a swimmer and so owned a couple thousand swimsuits (that might be slightly hyperbolic), finding the right fits was arduous at best.

Even when I was a damned dancer and weighed 30 pounds less, I was always fairly pear shaped. I got an ass at like age 21 or so, right around the time my boobs went from a A cup to a B (and then pretty much stayed there until...oh...right now). Even when I was comfortable wearing bikinis, because it was the Millenium (oooooh!) and that meant I walked around showing off my belly button and tramp stamp (procured before that adorable name for such a tattoo existed and probably named for girls like me), it was the days before mix and match swimwear and I'd buy bikinis in two sizes to piece together one that fit. Thanks, Target!

Cut to many years later. Cut to 30 pounds later. Cut to an image of my ass and stomach getting bigger and bigger and my boobs staying the same goddamned size. Cut to looking more like a pear that tried to be an apple but forgot to ask for some boobs! Cut to not being able to fit my ass into any of the swimsuits I currently own, including the one I bought last summer. Cut to having an event in three weeks where there will be a pool in which I would like to actually swim and not sit beside in a caftan and a cocktail like Liza Minnelli.

It's not as if I can transform into Giselle from Liza in three weeks. No amount of crunches will do that.

Thus began the search for a suitable swimsuit. One that would accentuate my curves while covering my belly, but that doesn't make me look like a grandmother or a Mormon or a 12 year old. As if a 12 year old has this ass.

And I found one that I loved at ModCloth, that purveyor of all things retro and vintage and this suit was Marilyn meets Esther Williams and I was going to look adorable in it.

And I've never worn a 16 in my life. In pants right now, I'm about a 12. That 16 was yelling at me, calling me a fatass, telling me I fucked myself up and I should be ashamed and just get lipo already.

And to top it all off? I did the whole support chat line. The gal was all, SMILEY FACE! How can I help you? I was all, yeah I can't figure out which size I need. And she was all, Yeah you'll want at least a 16 or it will be too restrictive, but don't worry. It will just be a bit baggy in the bust. But we do free returns! SMILEY FACE! And I was all, Thanks for nothing. Do you sell guns to shoot yourself with too?

Cut to a complete meltdown.

The thing is: I don't think I'm fat. I've gained some weight, which I'm working on losing, and am struggling with, admittedly, because I've never had trouble losing weight this much before. But you don't have to leave me comment telling me how not fat I am or how pretty I am, etc. Please don't. I'll just delete those.

The thing is: I wasn't stoked about my weight gain, but I didn't feel that fat until some website told me I was.

And, because I'm apparently a masochist, I searched and searched online, during this meltdown, sobbing all the while, for swimsuits in my size. I searched for one pieces and tankinis. Even the mix and match tankinis? I couldn't find bottoms that came in my size. I found a custom suit website, but I'm really not looking to pay $200 for a suit.

And I shouldn't have to pay that much for a suit just because I don't have boobs.

I know it's not that uncommon. There have to be plenty of women folk who are bottom heavy. And we want to swim too!

PS? So not getting a boob job either. It's not a "my body is sacred" kind of thing; it's a "I worked in lingerie and saw enough bad boob jobs to be scarred for life" kind of thing. So my boobs will just be small. Until my fairy godmother makes them a nice full C that is.

Poor Eminem watched me melt down and then self flagellate and then finally I gave up and gave in with a pathetic, childish whimper and decided dramatically that I would just never swim again. I'd sit by the pool in my jeans and just have a fat ass and fine. Pouty pout pout.

It's such a shame I don't have much flair for the dramatic.

Anyway, we went to Target today, who doesn't discriminate against the fat-assed, and I found a decent fitting tankini that wasn't fabulously vintage and didn't scream Marilyn, but which did fit me and which neither makes me look like a grandmother or a Mormon or even Liza. It looks nice, something a thirty-something would wear and actually swim in. And, yes, the bottoms say XL and the top says M. So what?

Thank the mother effing love out of Target, ladies. They love us just as we are.

I learned to love my small boobs a long time ago. Now I just have to learn to love my ass too. And to find some more time to work out too. Can't just let this ass take over everything now, like The Blob or something.
Email ThisBlogThis!Share to TwitterShare to FacebookShare to Pinterest

Amen! story of my life. I gave up on one pieces not fitting properly along time ago for the exact same reason! I also have a rule for purchasing any said one piece 1. it absolutely must have a low back because i cannot stand the huge ass and the huge ass of fabric covering it up to your shoulders making it look even longer and bigger. 2. stylish- either retro /vintage/ sexy . I realize this is a tall order for one pieces but they have been better in the last couple of years and as such have accumulated two one pieces and one is in fact from Target. The rest of my suits are bikinis(I have come to detest tankinis) and since my mid section pretty much rocks( well at least in comparison to my large thighs and butt) I'ld rather have people staring there than my thunder thighs and ass. Yet, I too, have issues with finding bottoms that fit properly. My sister has decided she is just going to wear black underwear and I have followed suit. Find some thick underwear which doesn't go see through when wet or while wearing and your fine (I believe Victoria Secret is where we purchased ours) When wanting a matching suit I have come to embrace the new trend of the brazilian bikini. Although I don't actually need to find a Brazilian style since pretty much all the bottoms look brazilian on me. lol Since living at the beach for 5 yrs I have come to accumalate many suits and all it took was a trip to the east coast beaches to help me realize I look pretty damn good. I felt like a super model over there! okay maybe exaggerate but still it definitely helped me put things in perspective. All these west coasters are freakin' anorexic.

You might not know this about me, since I'm always talking about boobs, but I like a girl with a little junk in the trunk too. So there's that.

There! A "comforting" comment you don't have to worry about deleting.

I hate jean shopping just as much as you hate bathing suit shopping. Well, I hate that too, but jeans never seem to fit me right, bathing suits I can fake it till I make it! Why can't some woman design pants and swimsuits that meet the needs of girls who have weirdly built bodies? Maybe we need to team up and create our own line?

I am RIGHT there with you... and my dilemma is knowing that I have to fit into my gorgeous Vera Wang wedding gown. I haven't worn a bikini in a couple of years. And before that it had been at least 5.
Don't beat yourself up too much. I quite literally feel your pain. There is nothing I can truly say that will alleviate that sting. It sucks - it really does.

Amen sistah!! Such truths spoken here. Glad you found something at Target...you could also check Macy's...they have a swimshop in additionto their regular stuff, they have miracle sizes there! Have a fun summer, enjoy your new/custom sized 2 piece! :)

so funny, so true. haven't worn a bathing suit in longer than I can remember and the years ain't making this body any prettier.

My pleasant urges tell me you have been SPAMMED! LOL!

I hear ya about bathing suit shopping. My size differential has always been one size bigger on the bottom than the top, so I guess I should count myself lucky. At any rate, I don't love swimming anyway, so I'll be sitting by Liza.

Hope you have fun.