A week or so ago, as my friend and I were looking at Christmas lights, we saw a house with a sign on the lawn that said:

A Savior is Born
JESUS

Just in case you were thinking it was a different savior whose birth is usually associated with this time of year. I can just picture the converstion that went into making the sign.

Let's make a sign that tells people a savior was born!
Which savior?
JESUS!

Today, as I was driving home from Seattle, I saw a guy standing on an overpass with a huge cardboard sign that said, JESUS.

That was it. No other words.

I really wonder what the purpose of the sign was. Was it Jesus' ride from the airport? Was the guy worried that he might not recognize Jesus or that might get a cab instead? Or maybe Jesus was up on the overpass and he wanted us all to know. Or maybe the guy IS Jesus and that was his abnormally large name tag.

I often wonder about religious billboards. You see many this time of year, but depending on what part of the country you're driving through, you'll be inundated all year round. But billboards seem to really only be effective for fast food or casinos. I don't really know that "God" is really going to get converts that way. Has that ever worked?

Has anyone ever driven down the highway, happy to be sinning, perhaps drinking and driving, looked at a billboard that said, "Repent, sinner, or DIE!" (an actually billboard I saw once) and thought, Well SHIT, I'd better repent then! ? I'd really like to know if that ever worked. Is anyone a minister or pastor or something? Have you ever gotten a new churchgoer who walked in and said, "So I saw your billboard..."? 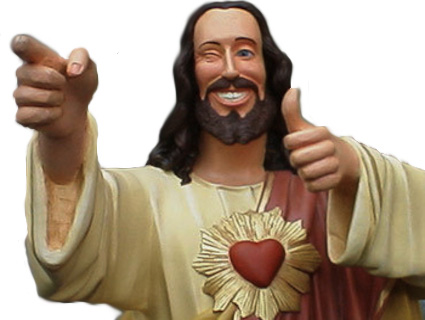 The one place that I saw a billboard advertising Jesus was above a strip club that I drive by every day. It says, "Jesus, save me!" and is literally right above the strip club.

Besides that, the only appropriate place for Godvertisements that I can think of is on bridges.

This is genius!! May be he was just a Hispanic though.

The buddy Christ! I actually have one of those, bought it at Jay & Silent Bob's Secret Stash. Lol... that would be a much more effective marketing too IMO. Insomniac #4 does not respond to threats from angry billboards.

When I was growing up, neighbors up the street used to put up a sign on their home at Christmastime that said, "Jesus Is the Reason for the Season." That was it. No decorations. No lights. No sparkly things. It must have sucked to live there.