the saga of the broken bed

So, before we broke up, the ex and I broke my bed. Yup. That happened. You can guess how.

You can also do the math and given that the last time we had sex was over a week before he dumped me, you'll see how effing long this saga truly, truly is. It's an epic, folks. I'm like Odysseus. Minus Medusa.

But the break wasn't actually that bad. It was just the plastic foot that goes in the corner of the metal frame. So my bed was missing one foot which meant that it was teetering like an old man with a walker with one leg shorter than the other (on the walker; not the man). Not exactly awesome. Still, I stuck a book under there and called it a day.

So I was living on this rickety ass bed, feeling a little seasick from it all actually. And then HP dumped me and it's not like he cared that his ass broke my bed or anything. But it's not like I was getting any so the rickety bed was not exactly the end of the world. And Goldie doesn't care if she's used in the bed or the bath or what.

Nevertheless, I needed to fix my bed. It wasn't exactly...how you say...classy. Plus it was just a reminder of the last time HP and I had sex and it's not like that time would be memorable on its own if not for one broken bed, nor did I want to remember it at all in any way.

So. This problem needed to go.

"Bullshit!" exclaimed the pissed off woman. No fucking way was I paying for a whole new bed frame because one plastic piece broke. Surely this was a common occurrence. Surely this is a big racket. Surely this was turning into a bigger headache than I'd planned or needed and I was about to pull out a katana Kill Bill style and get myself a new fucking bed set for free I tell you what.

What's a little blood spatter? Sheets will cover that right up.

Yesterday morning, as I got out of bed, the mattress tilting beneath me, like a 800 pound person getting out of a mini-cooper, I'd had enough. "I've had enough!" I yelled to no one. Though Hobbes gave me an annoyed meow and rubbed up against his food dish. Because he has his priorities straight.

I drove my ass to the Target, battled holiday parking and holiday shoppers and holiday checkout lines, and I bought a tool to fix my bed.

I came home and I fixed that damn plastic foot MacGuyver style. 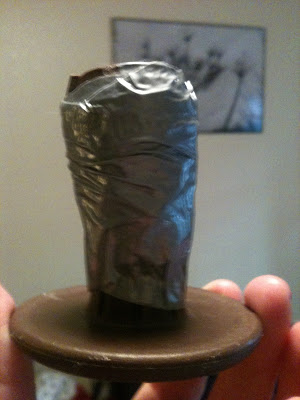 Duct tape fixes everything. By the way, Internet, it's DUCT tape, not duck tape. THAT is something else entirely.

Anyway, so far so good! It took a little while to get my land legs back, but it feels good to have a sturdy bed again. I don't know how it will hold up with rigorous bedtime activities ifyouknowwhatImean, but there's only one way to find out. Wink wink.

The line starts here.
Email ThisBlogThis!Share to TwitterShare to FacebookShare to Pinterest

I'm first to comment! Which means I'm first in line! Suck it, monkeys!

I am laughing my ass off at my Jessica above who I just adore...and I adored this post!

Ooh - I broke a bed with my super hot boyfriend back in the EIGHTIES! Actually, I'm not sure why I'm so excited about that.

Good for you, MacGyver! You're like Germaine Greer, Helen Reddy and Annie Lennox all rolled into one!

this made me laugh, i so needed a laugh! good for you for taking matters into your own hands. literally.

Had the same problem once with my ex's bed. Except the break I helped cause went beyond duct tape. We had to remove the other three feet.
Now my last ex's bed... we broke the entire frame. Good thing I have a welder....

There's a documentary on how companies don't produce parts, produces parts that are too expensive and purposely create products that don't last so people will buy more. It's called the light bulb conspracy I think.

Friends of my parents broke the ceiling fan in the bedroom. Hmmm

MacGyver would be proud of your handy work.

I'm impressed with your wherewithal for not only battling various stores and idiocy but also holiday shopping and STILL Being able to fashion something that will not only fix your bed but also looks like a butt plug. What. I'm NOT the only person who thought that. Guaranteed.