what a lady, what a night

What a trip that was, Internet. Goodness. The ups. The downs. The unexpected heat. The shopping. The hotel (grrr). The amazing show I will tell you ALL about. The glorious streets of San Francisco which make me homesick for Europe, but which have a personality all their own.

Gard I love this city.
Where do I start? Shall I maybe go chronologically? I guess I could. But that would make sense and we all know I avoid any kind of sense at all costs, unless of course we're talking about Sense and Sensibility and then I can lose myself in that kind of sense for hours and days. Wait. Where was I? Right. My trip to San Francisco.
So last we talked, Internet, I was having a tiny love affair with my hotel. That love affair has ended. Finit Finito. It was a not a great lover. The kind that started off strong, but lost interest in pleasing me early on and made me do all the work.
I slept so-so. It was a little loud, but that was expected in a Union Square hotel and I had brought my earplugs. The room was just too hot and, being San Francisco, there was no fan or ac to speak of. So I could not get comfortable. And I awoke with a headache and really craving a nice, scalding shower.
Which was not to be.
My shower was cold. It got warmish for a bit, tepid at best. Misery. I know these buildings are old. I like that about them. I like that they have narrow stairs and creaky hallways. They have an old-world appeal that makes me all fuzzy in my heart. But there are certain amenities that I think any hotel should have (and I'm traveled enough to know that in the US, certain things should not be impossible). So, call me crazy, but I think a shower should get hot.
Anyway, then I headed over to Embarcadero to see the brand new show, Peter Pan. Please don't ask me what I do for a living that sends me to San Francisco to see a play. I refuse to blog about work, except that I will say that doing things like that are the best part of my job. It's like when I discovered that people get paid to stay in hotels around the world and critique them. I mean, who does that? Who gets paid for such a cushy life? Point to note: if you'd like to hire me to review hotels, I'm game.

I have to take a moment to tell you about this show, because it is so fucking cool! Click the link above and check it out. It's a completely new show, taken straight from JM Barrie's story and it is a whole new theater experience, I can't even tell you. I think I've seen a lot of different kinds of theater, but nothing like this. My best description is this: a combination of theater in the round, CGI projected scenery, Cirque du Soleil, melodrama, and puppetry. The animals in the play were all puppets, handled by a voice actor/ puppeteer right there on stage, topped only by the crocodile that was manned by two men in a bicycle-like contraption. It was brilliant. There was flying and contemporary dance and an ingenious use of trapdoors on the stage. And the pirates all played instruments so all accompaniment for the few songs was done right there on stage. Oh and the talented Jonathan Hyde, of Jumanji

played Captain Hook/ Mr. Darling and we has absolutely excellent. I truly, truly enjoyed it. 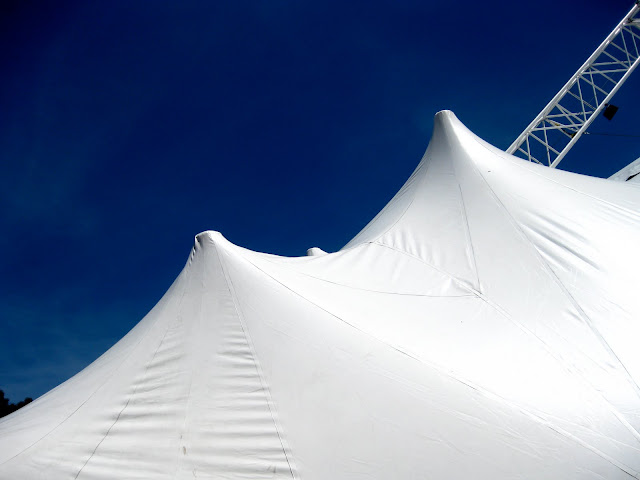 The tent. See that blue sky? Yes, this was in San Francisco in May. And yes, it was hot.
This show premiered in London and is making its US debut in San Francisco. If you're in the area, go. Go see it. I predict it will eventually hit all the major US cities, but only in the summer months. Did I mention it's in a tent? Oh, and parents of little ones? Don't buy front row seats. Trust.

After the show, I took the rest of my day to walk up Market from Embarcadero to Union Square taking pictures and enjoying being out on the city streets. Man alive do I love that city. Always, always reminds me of walking in Europe. Photos to come, but I didn't take my Holga because I didn't have room in my carry on and very much missed having it. I did a little shopping and made friends with a kid in a coffee shop who took pity on me and made me an iced green tea. Turns out he's from a little town down here in So Cal that I'm quite familiar with. Such a small world.

I grabbed something to eat at the airport and settled in at the bar in my hotel for happy hour until I needed to head to the airport. At which point I drank delicious Fat Tires (which proved too much for little ol' me) and chatted with other tourists while watching some random baseball game that I really don't give a shit about, but which seemed interesting with a beer in my hand. 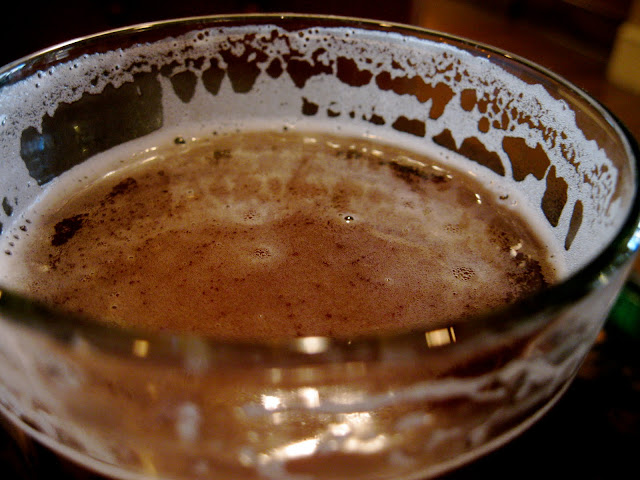 Note: I cannot handle my alcohol. Nope, cannot.
I feel like maybe I could when I was much younger, but suspect I just had less dignity then.

So by the time I was en route (say it with a french accent, bitch) to the airport, I was telling the young and hip cabbie my entire life story and feeling a little woozy. But not to worry I held my head high and pulled off sobriety like a champ.

At this point, I must note my pride at the TSA workers in SFO (workers? officers? whatever, you know who I mean). You need to believe that I tell this story sans sarcasm of any kind. I am truly pleased. In front of me in the security line was a nice Sihk man and his two unruly boys (poor guy was trying his hardest to seem like a nice upstanding guy while keeping his boys from toppling over the bins and metal detectors). In this world we live in of post 9-11 paranoia, I know it's harder on men who look like him, that they have to work harder to appear innocent. Which pisses me off. Anyway, the TSA folks passed him through security with no incident and instead chose me for random screening. And I know you're scoffing right now, but I thought that was so cool! No racial profiling at SFO. Their random screening was indeed truly random (unless I'm on some watch list for my liberal-ass ravings), but when the white chick gets chosen for screening, there is finally some balance in the universe.

Seriously. And sure, it was a little inconvenient, but I had plenty of time thanks to young hip cabbie and I really didn't mind. I had nothing to hide. I fly so often that I never forget any kind of liquids in my bag, so screening completed, pat down done (though I think that TSA lady owes me a drink now), and I was on my way.

But that's where the fun ends, Internet. I was due to fly out at 9:30 last night, puting me home around 11 pm. Not an ideal flight, but oh well. But no, We didn't even board until close to 10, something about the toilet being out of order on the plane and they told us to pee first or hold it. We boarded. And then sat there for an hour. Something about the air conditioning and air pressurization (trust me, you want air pressure on a flight). They fixed that and we got in line for departure. And then we sat. And they took us back to the gate to deplane for our comfort (which was nice of them) about 11:30.

We were all cranky by this point. I was feeling so exhausted, sure the beer had been a mistake, and after the claustrophobic heat on the plane, a little woozy. Plus I had been sitting next to a guy who was shamelessly flirting with me, said he thanked his lucky stars I sat next to him (seriously, he said that) and I was trying to stay sane while fending off his advances (I think I made up a boyfriend) and try not to kill myself. They finally let us back on the plane, everything fixed.

But then we had to wait for more fuel.

Really. You can't make this shit up.

I think we took off a little after midnight. I didn't really sleep on the plane, though I tried, and when I did, I was treated to some lovely nightmares. May write some stories out of them. Oh! And I should mention that I hadn't checked luggage. I hate to check unless it's really necessary. But they decided because it was such a full flight that the carry on roller bags would have to stow under the plane (they didn't make us pay). So I had to wait another 15-20 minutes after landing to get my bag back. This is why I carry on. So I don't have to wait for checked luggage! Grrrrrr!

I think I got home a little before 2 am. So you can imagine what a fantastic mood I'm in today. It's not that bad, but I'm exhausted. And bound and determined to not do a damn thing. I needed to get a ton done today for my garage sale next Saturday, but I fear I may need to postpone. I just have so much stuff I still need to go through (books, desk, kitchen) and I won't have any time.

But I will be selling some furniture online if anyone is interested: kitchen table, fridge, bookshelf, desk, etc. Let me know and I'll give you first pick.

And of course it's about a thousand degrees today. I am so damn sick of Southern California.
Email ThisBlogThis!Share to TwitterShare to FacebookShare to Pinterest

uggggh, that sounds awful. sowwy, dear. at least you got to hang in SAN FRANSICO!!! on day i'm moving back. best place to live. EVER!

thanks, dollface!! I DO love SF. wish I could afford to live there. and that they had straight, single men. of course.