My hair is trying to kill me

This is the tale of a girl and her locks and how they went from wonderful to complete bitches. I have no idea why her hair is plural but that's just how bitchy.

To be fair, it's not entirely the hair's fault.

Let's start at the beginning. You know how much I love the Aveda Institute. I've been going there for quite a while, paying nada for a great cut and pretty much just loving my hair.

Wait, I should back up.

I've always had great hair. It's super thick, grows fast, and does what I tell it to do. Got it? Great, we can move on.

So my favorite stylist at the AI, Carly (I hope she doesn't mind me mentioning her name, because she was awesome and incredibly talented and I miss her) had the nerve to graduate. I mean, why didn't she ask me? And, as I understand it, she decided to not work in a hair salon after graduation. She's taking time or doing work in a spa or something. I forget, because it doesn't involve me in any way.

This was after she'd cut off all my hair for Locks of Love and now I had short hair and a style to upkeep and no stylist. Carly had recommended me to another girl, whose name I won't mention, but I just wasn't happy with her. She really wasn't great at all.

So that left me stylist-less. So I called one evening and requested a senior student (how I got Carly in the first place, bee tee dubs) and this conversation took place:

Me: Hi, I'd like to make an appointment with a senior student to get a bang trim.

Dude on the phone: Unfortunately, you can't request a senior student.

Me: Well bummer. Because I used to be able to do that.

Me: Huh. That's really odd because I did that before.

Douchenozzle: There's no way that's true at least in the past three years. We don't do that.

Me: That's crazy because I know I did that within the last two years because I've only lived in Portland for two years.

Me: Why are you speaking to me with so much attitude. I'm simply trying to explain to you that someone there did do that in the past...

Stubborn little twat: I'M not getting an attitude. And I'm the supervisor so I'd know. Plus it's JUST a bang trim. It's not that hard.

Me: Oh you're not? Huh. Thanks for informing me. So nice to know you have so much control over your staff. And that's funny because the last girl who trimmed my bangs screwed them up.

Dickshit: M'AM, I'm not getting an attitude.

Me: Well I won't be making an appointment ever again and neither will any of my friends.


And I then I combusted.

I did try to get the shit in trouble because there was no need to be such a power monkey rude ass douchenozzle little shit, but apparently he doesn't really have a boss. Isn't that awesome? Needless to say, I can never go back there on principle alone. So now I really don't have a stylist.

Therefore, I haven't had a bang trim in far too long. Luckily I rock the side-swept long bangs.

Anyway, it didn't take. Like, you could kind of tell in the right light, but I wasn't going for subtle. I wanted red! I felt like that scene in Beaches when Hillary spends three hours dying her hair exactly the same color. Hillary says, "It's a subtle difference," and CC says, "I don't think so."

So I waited a few weeks and I chose a brighter color and I did it again. And it took at the roots, then it was a deeper, darker red-ish brown on the rest of my head.

After pouting about my once pliant hair, it hit me. Aveda. I had my hair colored a deep chocolate brown at Aveda Institute last winter and that color must be repelling the red. That's why it took at the roots; that's where it had grown out.

The color I want is between this: 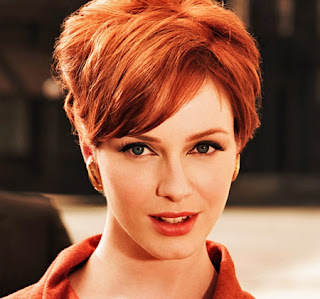 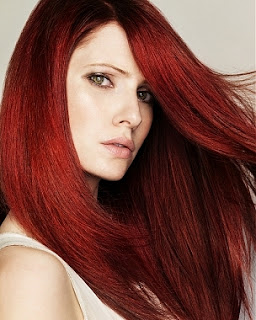 So I'm fading out the red with a clarifying shampoo, then after a bit, I'm going to bleach it up a couple shades and try again. It doesn't look awful now that it's faded a bit and I do get compliments. Point is though? I want it how I want it dammit! And it will be the red I want.

Oh yes it will be.

Oh and tomorrow is my dad's 65th birthday! Happy birthday to my pop. Next time, I'll tell you what I'm doing for his birthday, aka why I'm a super awesome daughter.
Email ThisBlogThis!Share to TwitterShare to FacebookShare to Pinterest