I know you have been waiting to hear what my costume for Halloween was. I know. And I'll tell you, but I must admit, I have substantially less enthusiasm for this costume now. After the fact. And I'll explain why in a moment. But I shall keep you in suspense no longer. For Halloween, I dressed as myself at 19. 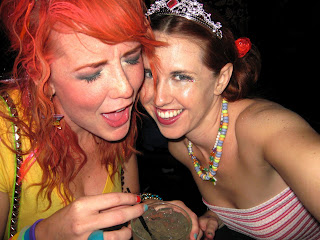 I am the one on the right with the tube top and tiara. I don't have a pic of the whole costume, so you can't see my platform shoes. But more on the tube top in a sec. The beauty to my left is Mo, who dressed as punked-out Rainbow Brite and I must say that she looked smokin'.
So, my costume. Dressing as myself at 19 may not have been my best idea. Not because I didn't look pretty cute, which I am hoping I did. And not because it wasn't a unique idea, which I maintain that it was. But because I didn't anticipate how it would make me feel. And that was like a 29 year old who is just trying to be 19 and it just didn't work.
I was terribly uncomfortable in that damn tube top all night. Partly because I just don't have that young confidence required to wear a tube top, the kind of confidence I had at 19. And partly because at 19, I was a good 20 pounds smaller, simply because I was young. I am usually comfortable in my body and I feel thin most days, but trying to be 19-year-old me comfortable in 29-year-old me's body just didn't feel right. Does that make sense? It's hard to explain. And it's okay that I'm not that small now. I have hips, I have an ass, I don't have boobs. But, whatever the reason, I felt like I had no business being in a tube top. I'll still sacrifice my dignity for bloggy purposes though. Here is the tube top in all its glory: 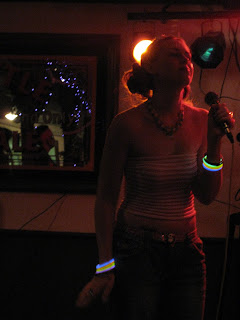 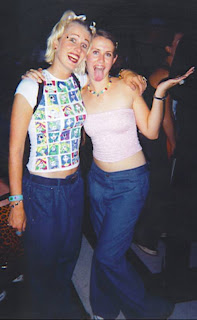 The other unanticipated feeling was that it would seem that I needed to feel cute last night. I didn't realize that I needed to be noticed or checked out until I got out, amongst the costumed people and felt pretty much invisible. And I guess, if I am going to analyze myself, that after the rejection of this past month-ish, I just really needed to feel attractive. Now, to be fair to me, a girl in jeans just cannot compete with all the scantily clad girls out there, girls barely 21, just wearing lingerie with different kinds of ears. We even saw full-on ass cheeks. But that's just not me. And never will be. I will never be able to do the slut for Halloween thing because I wouldn't want to.
And compare that with Halloween 1999. I went to a frat party with girlfriends and we were hot tickets. I had to pry the boys off. Which is how it should be, you know? But I am not 19. I'm just not. Side note: Halloween 1999, I took a photo with a guy dressed as a Mormon missionary (because I was the only person there that recognized his costume) and I wish to hell I had a digital scan of that pic to show you but I don't. But, I do have a repeat of repeat of that incident from last night. It was like the time warp: 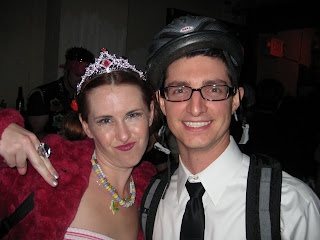 But there it is: me, already feeling uncomfortable and feeling unattractive to boot. And that just made me feel bad for myself and soon I was making lonely cat lady jokes and acting out an echo down there. Pretty ridiculous, I realize, but that's how I deal when I feel uncomfortable. I make fun of myself. So, last night was a bit of a train wreck, even though my friend's boyfriend, in an act of kindness, pointed out that two barneys checked me out at the end of the night. That was sweet of him. I think that next year, I may have a party. Something low key, amongst people I love, so that we all feel safe and loved and get a kick out of each other's costumes. I like that we're all too old and too dignified for the slut thing.
This blog got long, but I really want to post my Halloween photo awards!
So here we go:
The "scary" award goes to this guy. His costume wasn't scary, but he was. He even took off that pirate belt and used it as a whip. 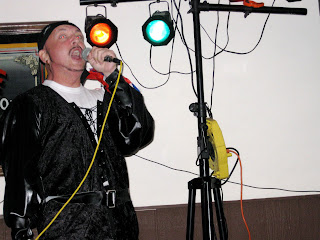 This guy wins the "classic" award. Fear and Loathing with Hunter S Thompson is always a good choice. 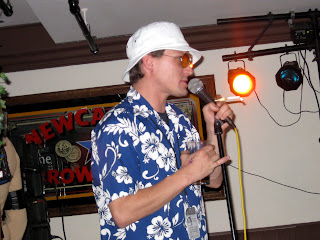 And these girls win the "typical" award, proving that all you need for Halloween are tight dresses (or lingerie) and some kind of ears of horns. Don't forget the sorority girl sit. 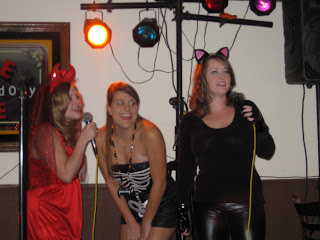 This guy wins the "dedication" award. Anyone willing to dress up like a full-on Tin Man without any of the other WOZ characters, is okay by me. 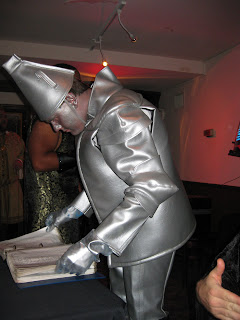 The "super cute" award goes to this gal. She was adorable and was super sweet too. 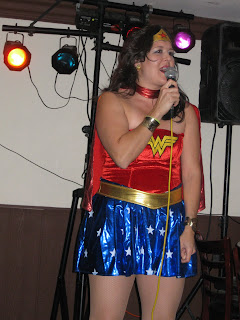 This girl gets the "rockin" award, simply for completely owning Mr. Roboto and working the room like a pro. 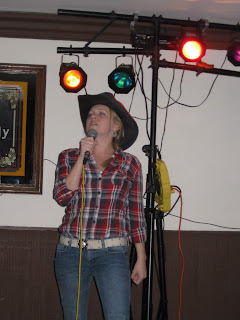 And lastly, these guys get the "enthusiasm" award for bravely dressing as Hooter's waitresses and loved it when I called them sluts. They even started singing a slut chant. Awesome. 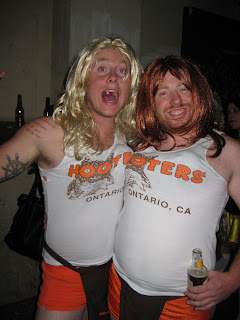 Happy Halloween
Email ThisBlogThis!Share to TwitterShare to FacebookShare to Pinterest