Something about working and mothers and inclusiveness

Today's topic has been on mind my for quite a while and I've just been trying to find a quiet moment to write, which has been difficult because I started a new job (yayayayay!) and because there's been just plain ol' social business going on. Which a gal really can't complain about! Social life is bueno.

So, as fate would have it, the first time I have time to write happens to be my least favorite day of the year: Mother's Day. Oh joy. Oh bliss. Long time readers know that I have a hard time on Mother's Day because of my own crazy mom and it's just impossible to escape the day in any possible way, whether you're inside and online and creep onto Facebook and see the thousands of posts celebrating moms or you go out in the world and see the perfect, happy families and want to stab yourself in the eye with a #1 Mom Zales pendant.

Not that it's wrong for these happy people to celebrate. I'm sure their mothers were awesome and told them they were wonderful and didn't beat them with random household objects. It's just hard for me to watch.

But at least I have my furbaby. 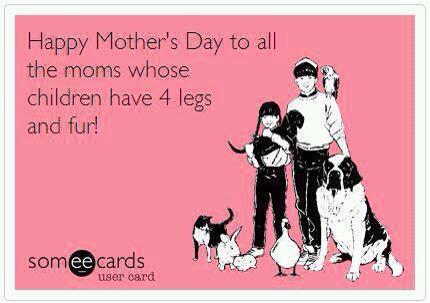 But this post isn't about Mother's Day. I just want to share my state of mind as sort of an apology that I might be in the teensiest of shitty moods today and so this post might sound slightly more bitter than it should. It's really not my intention.

What I've been thinking about lately is work and womanhood and motherhood and non-motherhood and working conditions, blah blah blah you get the picture. This kind of thing is always in the media, but especially now with the whole Lean In broohaha, which I haven't read yet but I am really interesting in reading and is not, actually, the subject of today's post.

But it is why everyone is talking about women at work and the age old question of women having it all and work-life balance.

My biggest issues with this discussion is that it's very narrow. It usually centers on one kind of woman (and no men): mothers. Can she have it all? Meaning a career, marriage, and children. And maybe that discussion IS material to that working mom! I'm not saying it's irrelevant; I'm saying it's narrow.

Setting aside statistics of people in the workplace (because I just don't have those and this isn't exactly an in-depth journalistic piece), my instincts say that that leaves out 3 other groups of working people: working fathers and working men and women who aren't parents. And let's not forget non-working moms.

Which seems unfair to me.

For one, it implies that work-life balance is only important for working mothers, as if those without children don't have important and busy lives to balance. As if, since we don't have diapers and baths to get home to, we clearly don't need flex time or reasonable hours. Sure, we have nothing better to do! Work is our children!

I certainly experienced that in retail (which, admittedly, is a crazy different world). If you were single or didn't have children, you were expected to work every holiday and work longer hours. Because there is understanding for the mom who needs to pick up her child from daycare, but not for the single girl who has to feed her dog.

And, in my 14 some odd working years (which isn't that many), I've worked in several types of environments, from women's retail (all women and maybe some gay men) to more co-ed environments and even one place where I was the only gal. And I think it's the same with fathers.

I concede that historically men haven't been as involved with their families. At least that's what Mad Men tells me (kidding!). But I've worked in places where men were very dedicated to their families and struggled with the balance as much as the mothers, men who left early for Trick or Treating or who brought their kids to the office because there was a mixup with the babysitter or because school got out early.

This is the modern world after all and I think this is just as big of an issue for fathers as for mothers anymore, so leaving them out of the conversation is just not smart.  And the non-parents still pick up the slack, regardless of gender.

That said, women still make less than men and plenty of workplaces still give mothers and potential mothers a hard time or lack of flexibility. That's a huge issue in our culture.

And I'm in awe of the working mothers who pull it off. I work with more than a few amazing women right now and I'm not sure how they do it. More power to them! I barely balance a life with work and a cat and a boyfriend and a blog and photography. I barely get my laundry done, so I have no concept how they do too. It's impressive, to be sure.

I'm not saying that conversation isn't important; I'm saying the dialogue is all wrong.

I truly believe that feminism is about choice. It's not about women ruling the world or setting new rules of female patriarchy. It's about choice! Opening up choice to whatever makes your quality of life good. Maybe that's a one income family and a mom who stays home. Maybe that's two working parents with kids and a juggling act. Maybe that's a married couple with a cat and a dog and a big travel fund. Maybe that's a single woman who works and volunteers and paints on the weekend.

So if we're opening up choice shouldn't we open up the dialogue about quality of life and work-life balance to include more than just mothers? Shouldn't we talk about flex hours for all employees and perks that work like an a la carte menu? Maybe one employee would like in-house daycare, but maybe another would appreciate paid meals or Fridays off.

Maybe out culture could totally use an overhaul on what is important in life. We have to support ourselves, but is anyone really happy working 80 hour weeks with no time for self or friends or family or food or art or travel? I don't think so.

Do you agree? Should we all be focusing on quality of life? Or do I have it wrong? Tell me! The most important thing is to talk about it.
Email ThisBlogThis!Share to TwitterShare to FacebookShare to Pinterest

Quality of life is definitely more important to me. In fact, I decided to quit my job and change careers because I want to be able to take my kids to school every day. And yes, women DO earn less but where I live, if a child is sick, it's no problem for a mom to call in and work home office, which is expressly forbidden for everyone (read: non-moms, including fathers).

Recently one of my children had to go to the hospital for something non life-threatening (which wasn't clear at the time), and while my boss said "family is more important than work," my absence was clocked and the hours were to be made up over the weekend.

Ironically, the person in charge of making sure we dads and non-moms fulfill the making up of the hours is a single mom. The single mom I share an office with works home office at least four times a month. It's also expected that she won't be able to carry a full workload. I share an office with 2 women and 2 men. All three of us males are fathers, but each one of us works at least twenty hours of overtime a month. Neither one of the women do. I wonder why we earn more money than they do?

At any rate, this was not meant to be a rant, or by any means misogynistic, but to say that I am in full agreement about the dialogue being in the wrong spot. While I might disagree on a few things (you really have no idea how much free time you have when you are childfree until you have kids, and then you're all "what the hell did I do with all that time back then? I could have been famous."), I am otherwise saying yes, yes, and yes.

So I quit my job. Right now I would be willing to make fries part time and shovel crap - which is basically what working for a corporation does to you, anyway - as long as I get to spend some time in the park with my kids.