Look at me! Posting on my blog! Hallelujah praise baby jeebus.

Seriously though, I can hardly be blamed for skipping writing for, oh I don't know, a MONTH, because life has been totally insane. Yesterday felt like the first relaxed and free day I've had in a million years.

First, I had that ten days in California, which was so jam packed and whirlwindy that I so needed a vacation when I got home (and more on that trip in a bit). But it was right back to work and then to a work retreat, which I planned and organized and which I'm not complaining about because I love doing that stuff, but was another busy, whirlwindy time. And I felt like I was battling a bug before that trip and I kept on fighting it on through the whole next two weeks, during which time I helped coordinate an office reorganization (like physical reorganization, like office and cubicles and phone lines and shit) and which I worked on today as well.

Last Thursday was the denouement of sorts of my mystery flu. I woke up Thursday with an insane migraine and it just got worse and worse as the day progressed and I ran around and lugged boxes and shit. By the time I left work, I was dizzy and nauseated and felt like death, pure death. I started feeling a teeny better about 8 or so that night, slept and slept and woke up Friday feeling fantastic.

Soooo clearly I'd excised my demons. I've never had an exorcism, but I'm pretty sure that's what it feels like. Plus, imagine how powerful I am to have done it on myself. All bow to my power.

And like I said, I worked some hours this morning, but I finally have a moment to sit down and write. Ahhhhhh.

So, let me back up. The California trip! I'll just give you some highlights.

First bit of drama was at PDX airport. I had to check a bag, so I decided to just check in at the airport. I go check in, get my boarding pass, kiss my boyfriend goodbye, and get into the long line to security. I get up to the first TSA guard who checks to see if your ID and boarding pass match and he goes, "This isn't your boarding pass." And then I had a heart attack. Turns out, the lady at Alaska switched my boarding pass with some chick named Rachel (which is funny, because that was my name for the two months before I was adopted, though I doubt TSA cares about that). Luckily, one of the guards took pity on my about-to-bawl-if-I-miss-my-flight face and took my to the desk to get my real pass and let me cut back into my place in line. Shout out to the guard at PDX! Sweetheart.

And I made my flight.

You all know I was there for my cousin's wedding right? The best thing was renting this deliciously pretty lens for the trip. I now must make this lens my own. I must. It's my precious and I can feel body deteriorating without it. I hate my other lenses now, my shitty, pathetic lenses. The losers. So first, I did several things all wrong. I was trying to save money because I'll need some dough when I go to India in December, so I didn't rent a car or get a hotel room. And I know my cousin kept telling me I wasn't a problem and wasn't getting in the way (and, admittedly, I did clean house and make drinks and food, so I think I was a big help), but if I'd sprung for a hotel, I would've been one less body in her house. And I really really really should've found a way to rent a car. It would've been helpful on my cousin, but it would've also given me more freedom and I could've spent more time with other friends and fam. But oh well. Live and learn right?

The other thing I should've done was find a way to take my boyfriend with me. Because the last trip down with a guy was so disastrous, I had decided a long ago that I wouldn't take a date to the wedding. But then as Eminem and I were doing great, I realized that I did want everyone to meet him and he won't have another chance for a long while. Plus, I missed him like crazy and I really did need someone there for me, someone to keep me sane when I was getting super stressed out. He was great and was texting me sweetness the whole time. But I really did need him there. But I lived, so, oh well.

I did get to my best friend's house in the desert and got to meet my new nephew Lucas, aka the youngest old man in the whole world with the puffiest, pinchiest cheeks you will ever ever see. I really wish I'd gotten more time with them, but I will get to see them at Christmas. At which point, Lucas will probably be a foot taller and riding a bike and reading and shit. Sigh. Such is life.

I did get to see my dad, though, and I was struck by just how OLD he's gotten in the last year. The man always looked like Einstein, but now he looks like Mark Twain, his hair is so white! He and I also used to make fun of old people who would read all the signs out loud. Yeah, he does that now. He shuffled around the mall with me and he announced all the signs. 50% off sale. Hot Topic. AT&T. Pretty Nail.

This last story I hesitate to share and I'm holding back many of the details until it unfolds. Okay, here goes:

My aunt (the mother of the bride) is alllll about geneology. She's like way into it and has done tons of work on our family. Anyway, so this aunt was giving me a ride and she needed some part on her car, so she and I are sitting in the waiting room of a Subaru (you know, the official state car of Oregon) dealership and chatting as two ladies are wont to do. We got to talking about my biological family (I'm adopted) and I told her how years ago, I found out my parents' names, etc, but never could find any more info. I also haven't opened my records or anything.

So she pulls out her iPad, signs into her Ancestry.com account, types away, and after a little search, finds my mother. Seriously. And right there on the screen is a photo of my biological mom and sister. Right there. And I they looked like me, which is the craziest feeling if you've never ever seen what a blood relative looks like. I'm not sharing that photo yet because I just feel like that's wrong somehow. I'll explain in a sec.

So then it took off from there. Turns out my mom died when I was little, though I don't know why yet and I'm going to order her death certificate to find out. we did a ton of research on my family and I have a notebook full of genealogical history from my mom's side. And then we found my sister, like I have an address and a recent photo of her and everything. From some of the info we found, I think she's aware of me, but the ball is clearly in my court because she'd have no way of know who I am. So, I'm going to write her a letter. I admit that I haven't even started it and while I don't want to waste much time, I do want to write it carefully and find the right words. That's partly why I want to wait to share the photo; I don't want to find her through this blog, because I want to contact her myself.

Here's a baby picture of me instead: 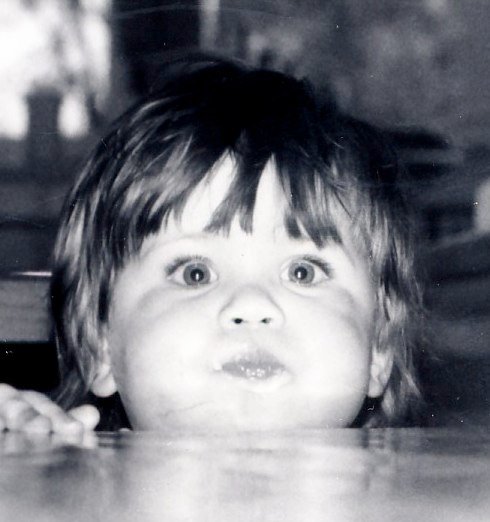 Crazy right? The best way to describe how I'm feeling is cautiously excited. I'm nervous to be sure, but way more curious than anything. Wish me luck!

I'm also coming up on two big events. Next week, I'll turn 32 and Eminem and I will have dated for six months. I'm totally happy about both.

omg!Bio sister! totally cray cray! You will definitely have to keep us updated with that, in your own time of course. I hope everything goes smoothly. so glad you got see you dad too, i love that guy, he's awesome.

As a fellow adoptee, I can't even imagine how you must feel. So scary!!! Sending much love your way.

Wow! Glad life is going well. So cool about finding your biological sister!